While it’s true that Minecraft has no shortage of creatures and mobs, many players are always seeking ways to add more animals into the game.

Members of the Minecraft community are often vocal about the changes they would like to see implemented into the game. This frequently includes the additions of mobs, many inspired by real life animals or based on Minecraft specific creatures.

Plenty of Minecraft players take it upon themselves to satisfy their ideal Minecraft animal environment through the use of mods. Mods in Minecraft alter the game in some way and usually add new and exciting changes to vanilla Minecraft.

Gamers who want to experience brand new animal life in their Minecraft worlds should check out the following animal related mods.

Some of the greatest animal mods in Minecraft

The More Nature mod is for Minecraft players seeking an animal mod that’s all about looks rather than a challenge. With this mod, new animals can be discovered in nearly every major Minecraft biome.

More Nature is for any gamer who has ever had the thought: there are bees in Minecraft, why not butterflies? The animals in this mod are adorable and loving. They all look incredible and are harmless to players.

Unfortunately this mod is only playable on older versions of Minecraft but could still be useful for anyone who enjoys playing on peaceful and experiencing the breathtaking views Minecraft has to offer.

Wolves in Minecraft are the closest things to domesticated dogs a player can get. Unfortunately, wolves only come in one color variation and can die easily even when tamed. However, these are not issues with the Revamped Wolf mod.

As the name suggests, wolves are improved with this mod. Wolves will come in multiple realistic colors, which add great variety to the game. This mod also adds wolf armor, similar to the already existing horse armor.

Wolves are far more realistic in this Minecraft mod as well. They are far stronger than in vanilla Minecraft, as they can feed themselves and have leaders of their packs. They tend to be smarter as well, lowering the chance of a tamed pet wolf getting itself killed.

Also read: Wolves vs Axolotls in Minecraft: 5 major differences between the two mobs

This dynamic animal mod is no doubt a major game changer. With the Craftable Animals mod, Minecraft players are able to make any kind of Minecraft mod appear without the need for a spawn egg or mob spawner.

This animal mod is sure to be an interesting addition to an SMP, as players can utilize the ability to spawn nearly every mob in the game for pranks and battles against friends.

Plus, this mod eliminates the issue of having to search far and wide just for a single specific mob, then having to transport it back to a base. Of course, players will still have to search for the materials needed to craft these mobs, though.

In vanilla Minecraft, the ender dragon is the only dragon mod there is, despite Minecraft being known as a fantasy game. Dragons are a staple of the fantasy genre, and yet the only way to interact with a dragon in Minecraft is all the way in the treacherous end dimension. But with Ice and Fire: Dragons mod, Minecraft players can experience dragons in the overworld.

This dragon mod has two main types of dragons, highlighted in the title: fire and ice. These mobs spawn in habitats that best suit their ideal temperature given their starkly different elemental bases. This mod also recently introduced the brand new lightning dragon.

Dragons aren’t the only new creatures to be added to Minecraft with this mod, however. Dragons prey on all types of mods, including fantastical additions such as cyclopes, pixies, sea serpents, and more.

This expansive mod will add a large number of animals to the game, some neutral, some passive and some hostile. Neutral mobs include bears, coyotes, whales and jellyfish. Passive mobs include deer, squirrels and dragonflies. Hostile mobs include sharks, moose and giant squids. However, there is so much more.

Additionally, Better Animals Plus offers more than just the addition of animals. There are new items and blocks related to these new mobs that players can obtain and use. This means that this mod completely changes the game of Minecraft, allowing even veterans of the game to have a brand new experience. 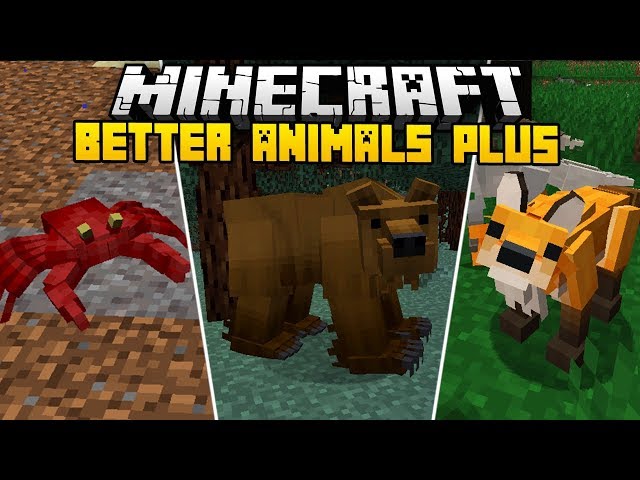 Watch this video by Gannicus96 on YouTube to see highlights of this awesome mod pack.