There are over 30 mobs in Minecraft, with three new ones that were just added to the game during the 1.17 update. Goats, Axolotls, and glow squids are mobs that were added into the game recently.

The older mobs that have been in the game since the beginning can still be commonly seen roaming around the world. Players can see cows, pigs, and other mobs roaming naturally around the world.

Cows and goats are two mobs that players may take lots of interest in. Both of these can be seen in Minecraft, and both are four legged friends, but they also have tons of similarities.

In this article, players will learn the five major differences between cows and goats in Minecraft.

Cows vs Goats in Minecraft: How are they different?

Obviously, one of the biggest differences between cows and goats in Minecraft is the way that they look. Cows are a blackish-brown and white color, mostly being black with grayish-white patches.

Goats, on the other hand, have a shaggy white coat that covers them, and have long curly horns on their head (males only). Female goats are white with no horns. Cows are also a bit taller than goats with the former being around 1.3 – 1.4 blocks tall and the latter around 0.9 blocks tall.

Cows are one of the most passive mobs in the game. They will never attack a player, even if attacked, the mob will just try to run away from danger. Goats, on the other hand, are a bit different.

When goats feel threatened they will attack players. They are labeled as a neutral mob. If a player stands near it for too long during the checking interval, the goat will attack them by ramming into them.

Players can find a cow roaming around the map while just venturing out in the grasslands, or plains, but a goat will only be seen near the mountains and at higher heights.

Goats are also more commonly seen in the daytime rather than at night. 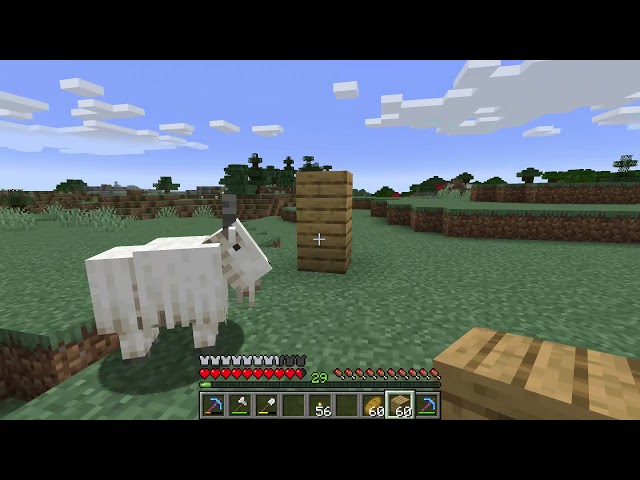 Since cows are passive in the game, their attack damage would be zero. Cows will not attack the player or other mobs, they will flee when damage is inflicted on them. Goats attack other mobs and players, and will deal 7 attack damage on each ram.

Sometimes goats will flee when attacked, such as other passive mobs. It really just depends on whether the goat likes the player or not. Sometimes the goat will attack back, and sometimes it will just run away.

In Minecraft, when cows are killed, they will drop 1-3 pieces of raw beef. Players can use this meat to make steaks when cooked in a furnace. Goats will drop a new piece of meat called “chevon” when killed.

Mets First Half in Review feat. Wayne Randazzo
How former Knick Bobby Portis made most of NBA Finals chance
Comment