If GTA San Andreas fans ever wished to create missions that they could play in-game, then they should try out the DYOM mod.

DYOM stands for “Design Your Own Mission,” and it’s essentially a mod that allows players to create missions for GTA San Andreas. It sounds rather general, but that’s practically the gist of it.

If players wish to create a mission where they play as Big Smoke and kill CJ at his crack palace, then they can do so easily.

In fact, many GTA clickbait channels on YouTube use DYOM to trick unsuspecting players into thinking that what they’re seeing is real. DYOM is an easy mod to get up and running, so GTA San Andreas players shouldn’t struggle to install it like they might with some other major mods.

GTA San Andreas fans interested in downloading this PC mod can do so by clicking here.

Once a player downloads and installs the mod properly, they should then choose to boot up GTA San Andreas. After it’s loaded, click on “New Game” and then “Design Your Own Mission.” By default, the player will see CJ on Grove Street, with what appears to be another CJ.

That other CJ model is simply the default spawn point. Players can change it to another location on the map, and play as a completely different character if they wish to do so.

Where are the missions stored?

Normally, when GTA San Andreas players wish to create and save missions under the “Design Your Own Mission” category, they will see that they can only save up to eight missions at a time.

Fortunately, it’s easy to store the missions elsewhere on a player’s computer. First, go to “Documents” and then to “GTA San Andreas Users Files.” There should be up to eight DYOMx.dat files (where x represents a number between 1 to 8) depending on how many missions the player created.

The numbers correspond to their order when viewed in GTA San Andreas.

What can one do in this mod?

Creating missions is a bit of an overgeneralization of what players can do with DYOM in GTA San Andreas. Players could create an objective where they could either steal a vehicle or they must destroy it, with various other little facets being edited (such as vehicle health, type, and any special properties worth noting).

Likewise, players could create two different gangs and put NPCs in either groups. Alternatively, they can create neutral and friendly NPCs, with the latter being able to follow the player around if the behavior is adjusted accordingly.

This naturally means that players could also choose to kill an individual or wipe out an entire gang.

There are also cutscenes, mission settings and objectives, and several other miscellaneous features for players to mess around with, as DYOM largely mimics GTA San Andreas in terms of what a player is capable of doing. It’s important to note that players don’t need knowledge of scripting to get this working.

Requirements for getting DYOM to work 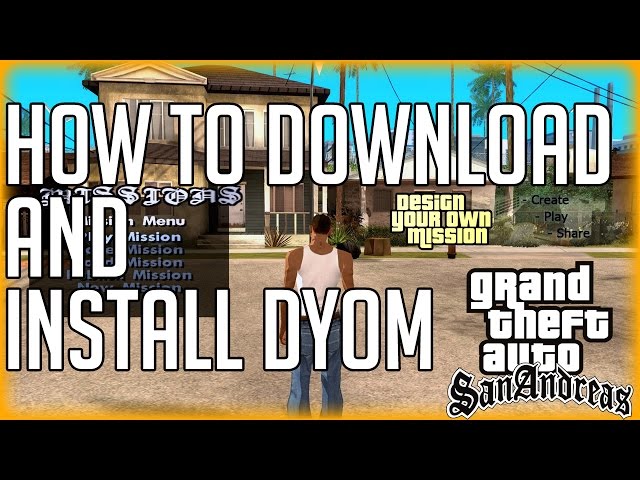 There aren’t many requirements to get DYOM working with most people’s GTA San Andreas copies. It’s important to note that this mod is for PC players and it requires at least CLEO3 to be downloaded.

The CLEO library can be downloaded here for the player’s convenience.

DYOM is a wonderful addition to the diverse list of GTA San Andreas mods as it allows a player’s creativity to thrive in-game. If users don’t wish to design missions, they can still download some from DYOM’s official website.