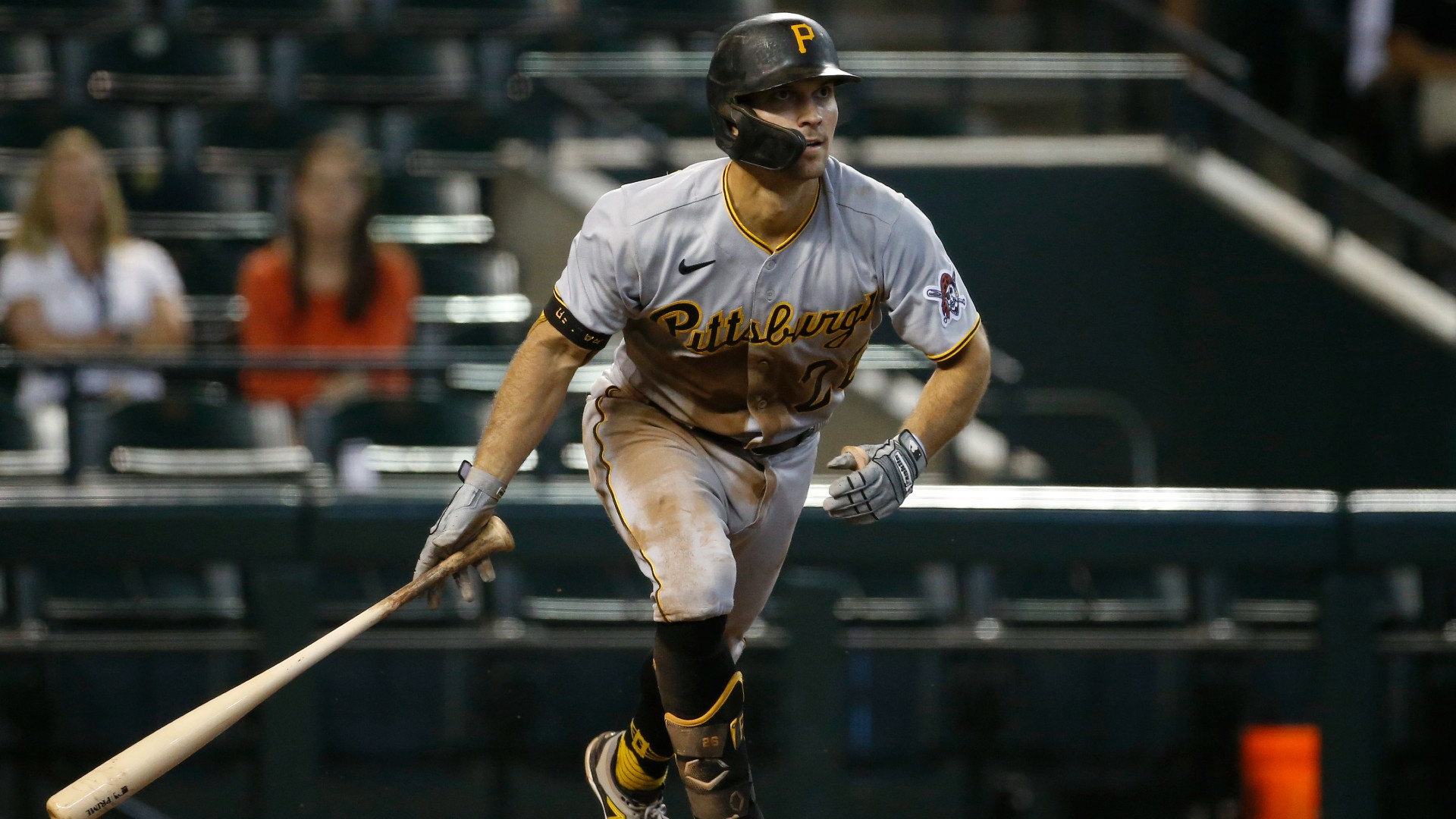 The Padres are loaded at nearly every position, and their lineup is only getting deeper.

Frazier, 29, leads baseball in hits this year and is not a free agent until after the 2022 season. One of the best bats on the trade market.

Source: RHP Michell Miliano is the third player going to Pittsburgh from Sam Diego with SS Tucupita Marcano and OF Jake Suwinski in exchange for UT Adam Frazier.

The reported deal is the latest ahead of Friday’s MLB trade deadline as buyers begin to make moves ahead of a postseason run while sellers hope to capitalize on present value in exchange for building toward success down the road.

Stock Market Pioneer graded the trade for both teams.

This is by no means a move the Padres had to make, but no doubt it makes them a better team.

San Diego already has Jake Cronenworth, who, according to Fangraphs, has produced 3.3 WAR, fourth-highest among second basemen in baseball. Frazier is sixth at 2.9.

Frazier is putting together the best season of his career; he leads MLB with 125 hits and is slashing .327/.392/.453. He was voted an NL starter in the All-Star Game over Cronenworth. He has a track record of being a high-contact hitter, and this year he has reduced his strikeout rate to a career-low 10.6. He also has hit four home runs and swiped five bases.

The Padres will find a way to put him on the field. During his time in Pittsburgh, Frazier displayed versatility with more than 1,000 innings in the outfield to go with more than 3,000 innings at second base, his primary position. He made cameos at third base and shortstop, too, but he hasn’t appeared at either position since 2017. It is more likely that if Fernando Tatis Jr. needs rest at short, Cronenworth or Ha-Seong Kim would play there while Frazier mans second.

San Diego can also shift Cronenworth to first base in place of Eric Hosmer to make room for Frazier.

Maybe the biggest question is where Frazier fits in the batting order. He led off for Pittsburgh almost exclusively this year, but the Padres have primarily used left-handed hitter Trent Grisham and right-handed batter Tommy Pham to lead off. Frazier, a left-handed hitter, could replace Grisham atop the order; he represents an on-base upgrade — .392 to .357 — and would allow the Padres to shift Grisham’s powerful bat closer to the middle of the order. Tatis has been the team’s primary No. 2 hitter, though Grisham, third baseman Manny Machado and utility bat Jurickson Profar have also logged ABs in the second spot.

This isn’t just a move for 2021, either. Frazier has one year arbitration eligibility remaining and won’t become a free agent until after the 2022 season. The Padres figure to be one of the best teams in baseball again next year and will enjoy having the 29-year-old’s services for it.

The Padres are 5 1/2 games behind the Giants in the NL West but hold a 5 1/2-game edge over the Reds for the second NL wild card. San Diego might not have needed a leadoff hitter or a second baseman, but too many bats is never a bad thing when chasing a World Series. And superutility players have had a knack for becoming postseason heroes (see Ben Zobrist).

This deal seems like a win-win for both teams.

The Pirates’ haul doesn’t include a MacKenzie Gore-type prospect, but Frazier was never going to net that much. Pittsburgh acquired a standout utility prospect in the mold of Frazier in Marcano, who’s the headliner in this deal on the Pirates’ side, and a pair of higher-risk/higher-reward players in Suwinski, an outfielder, and Miliano, a right-handed reliever.

Marcano is just 21 but has already has reached the majors, debuting at the beginning of this season. He has bounced around between San Diego and Triple-A El Paso this year, which is where he was before being acquired by the Pirates. He struggled in his first taste of big-league action with a .182/.280/.205 slash line, though his 12 percent walk rate and 18 percent strikeout rate were impressive numbers for a 21-year-old.

Pittsburgh fans shouldn’t be worried about the batting woes. He was promoted to the big leagues after no 2020 minor league season. Prior to that, the highest level he had reached was Single-A. The Triple-A numbers should be exciting; he’s slashing .272/.367/.444 with six homers and four steals in 44 games, to go with an impressive 1.08 BB/K rate.

MLB Pipeline lists his hit and speed tools as above-average and says that if the bat skills continue to develop, he could be “a serious on-base threat as a bat-first middle infielder.” The site noted that defensive struggles could move him to second base. Marcano has started at second, short, left field and right field between San Diego and El Paso. The site listed him as San Diego’s No. 5 prospect.

The other two players in the deal are fliers wbo could really pan out. Suwinski, who will turn 23 on July 29, has launched 15 home runs in 66 games to go with seven stolen bases and a .269/.398/.551 slash line in a breakout campaign at Double-A San Antonio. There is a risk that a high strikeout rate could lead to a low batting average, even if he balances it with double-digit walk rates. But he still has time to improve his approach.

As with Suwinski, the 21-year-old Miliano brings excitement and some red flags. He has been a strikeout machine out of the ‘pen, fanning batters at a 17.7 K/9 clip this season between low Single-A and high Single-A, part of a trend that began in rookie ball. He has posted a 3.60 ERA and held hitters to a sub-.200 batting average. Walks have been the problem: He’s averaging 7.5 BB/9 this season, which has ballooned his WHIP to 1.400. He clearly has the raw stuff to be a swing-and-miss hurler. The question is whether he can harness it.

The Pirates had little use for Frazier, who didn’t match up with their competitive timeline. They capitalized on his best season to date by turning him into a meaningful prospect who’s about ready to take his place in the lineup and also happens to be eight years younger, plus two players who could help them compete down the road.