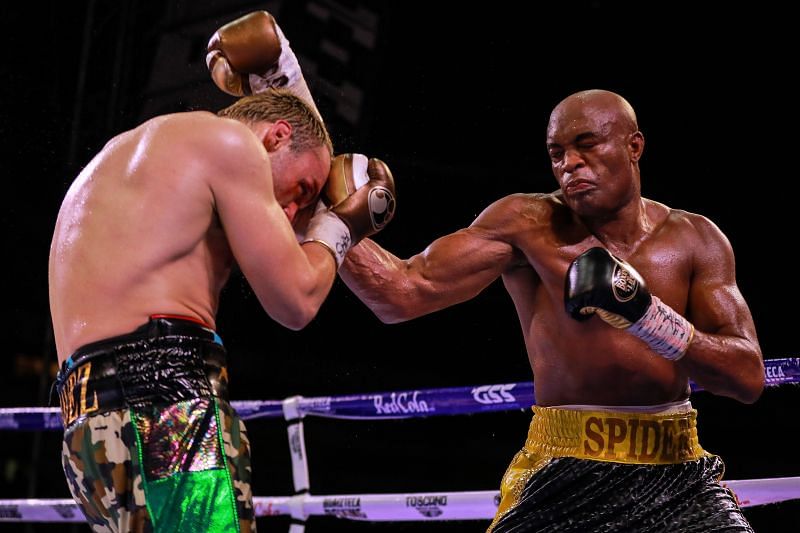 MMA Fighting was the first to report on the bout being targeted for a September 11 card set to take place in Los Angeles. The fight is reportedly going to be part of the same event where Vitor Belfort will face Oscar De La Hoya in the main event.

The bout against Tito Ortiz will be Anderson Silva’s return to the squared circle after a dazzling performance in Mexico against Julio Cesar Chavez Jr. in June. ‘The Spider’ put up an excellent show, landing a total of 392 punches versus Chavez Jr.’s 153, and walked home with a split decision victory.

How has Anderson Silva fared inside the boxing ring?

Before facing Chavez Jr., Anderson Silva had two professional boxing outings that took place years ago. On his debut, he faced Osman Luiz Teixeira in June 1998 and had to lose the bout via corner retirement. Next, he locked horns with Julio Cesar De Jesus in August 2005 and this time secured a KO win. Both the bouts took place in Silva’s home country, Brazil.

Here is the full fight between Anderson Silva and Julio Cesar Chavez Jr.

Here is the second boxing match of Anderson Silva’s career.

Anderson Silva has now taken to boxing after a decorated career in mixed martial arts. He still holds the record of the longest winning streak in the UFC with 16 wins. However, the downward trajectory of his MMA career started when the former middleweight champion lost to Chris Weidman twice, breaking his leg brutally in the rematch.

After that, he continued to suffer defeats to the likes of Michael Bisping, Daniel Cormier, Israel Adesanya, Jared Cannonier and finally Uriah Hall.

Anderson Silva retired from MMA after his loss to Uriah Hall, which was inevitably an emotional affair for everyone involved. However, ‘The Spider’ made it clear in interviews that followed that he had no intention of returning to MMA and was done with the sport.

If his performance against Chavez Jr. is anything to go by, MMA fans will get to enjoy the best of Anderson Silva for a while longer anyway.