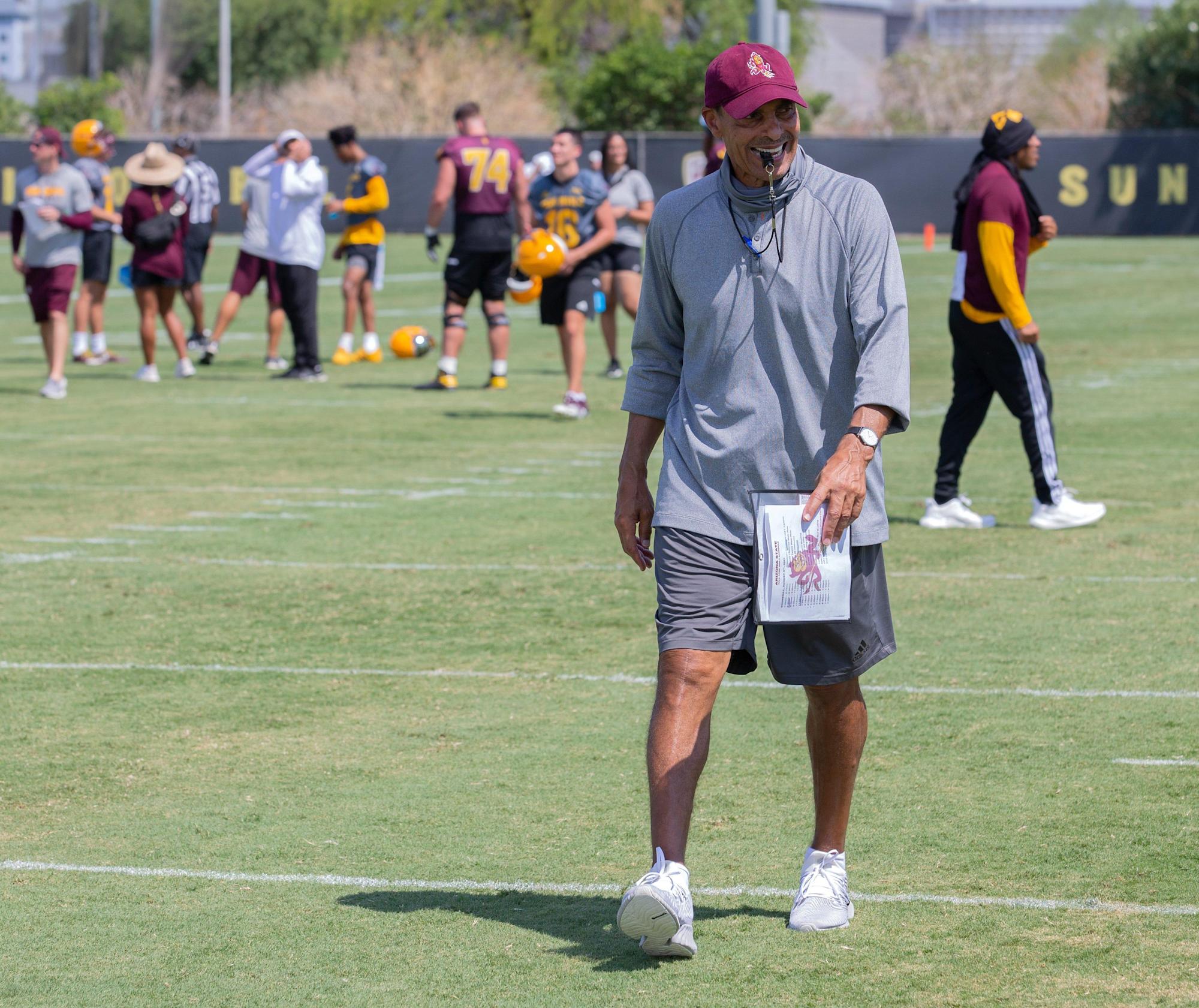 Arizona State football coach Herm Edwards doesn’t let anything faze him. In fact, he says he likes “to create chaos where there is none.”

It is one of the reasons he switched practices from morning to night this week. He likes to keep his players guessing and says one of the best things you can do to prepare for life is learn to adapt.

The Sun Devils, and everyone else, have had to do that in the last year in the wake of the COVID-19 pandemic.

Well, there was indeed plenty of chaos in the football program this week and it wasn’t something Edwards had to manufacture. On Monday, wide receivers coach Prentice Gill and defensive backs coach Chris Hawkins, both starting their second years in the program, were being put on administrative leave in conjunction with the NCAA investigation into alleged recruiting violations.

That made three assistants ushered out of the way for now, the other being first-year tight ends coach Adam Breneman, who was put on leave last month.

After the team’s two-hour session Tuesday night at Kajikawa Practice Fields, Edwards addressed the media for the first time since the most recent departures.

He says his team has been good at adapting and he expects this case to be another example of that. He used a baseball analogy.

“I was a pretty good baseball player, in high school, in pony league, but as I got a little older, I continued to try to play baseball, but I couldn’t adapt to the curveball,” he said. “That’s kind of like life. Life throws you some curves. If you can’t sit in there and hit it, you’re going to be in trouble. One thing I know about this football team, we handle curveballs. Always have.”

The moves made in wake of those departures were as expected. Bobby Wade is stepping in to handle wide receivers, while Trey Anderson is going to help out with quarterbacks, which will free up offensive coordinator Zak Hill to oversee the receiving group.

Veteran Donnie Henderson is handling the defensive backs. He played that position for ASU’s 1996 team that made the Rose Bowl and was defensive coordinator for Edwards with the New York Jets in 2004 and 2005.

Edwards says nothing has changed because all were already in the program in various capacities, albeit not coaching roles. Wade interviewed for that position, as did Juston Wood, who was appointed to direct the tight ends in Breneman’s absence.

“It’s not like these guys are new or not new. They know the system, players. So it’s just a different voice,” he said.

The three out of the mix now are the youngest on the staff and all have quickly earned reputations as dynamic young recruiters. While reinforcements have been moved around to help with the on-field details, it remains to be seen how ASU will handle the all-important recruiting portion of the job.

“Right now, they’re on administrative leave and they’re not recruiting right now,” Edwards said. “We’re talking to kids. The best recruiting you can ever do is win. We still have to win games, and that’s what we’re practicing to do. We’ve filled those spots with some guys that have been here, so it’s not like we weren’t prepared.”

The Sun Devils head coach returned after missing two practices to attend Hall of Fame festivities over the weekend in Canton, Ohio. Edwards was co-presenter for inductee John Lynch, a longtime friend.

The offense had its best practice thus far on Tuesday, prompting the coach to joke that he should leave more often.

He enjoyed the brief time at the festivities with his wife and two daughters attending along with him.

“I missed the practice and I came back, and I watched the practice Saturday because I was obviously in Canton, (Ohio). I get up and I’m kind of watching the practice, they sent it to me and I go, ‘Oh, OK. We kind of look different.’ And then last night, I showed up here and I’m looking and going, ‘What’s happening to these guys? It’s like a different offense.’ And I told them, ‘Do you guys want me to leave again? I can leave again.’