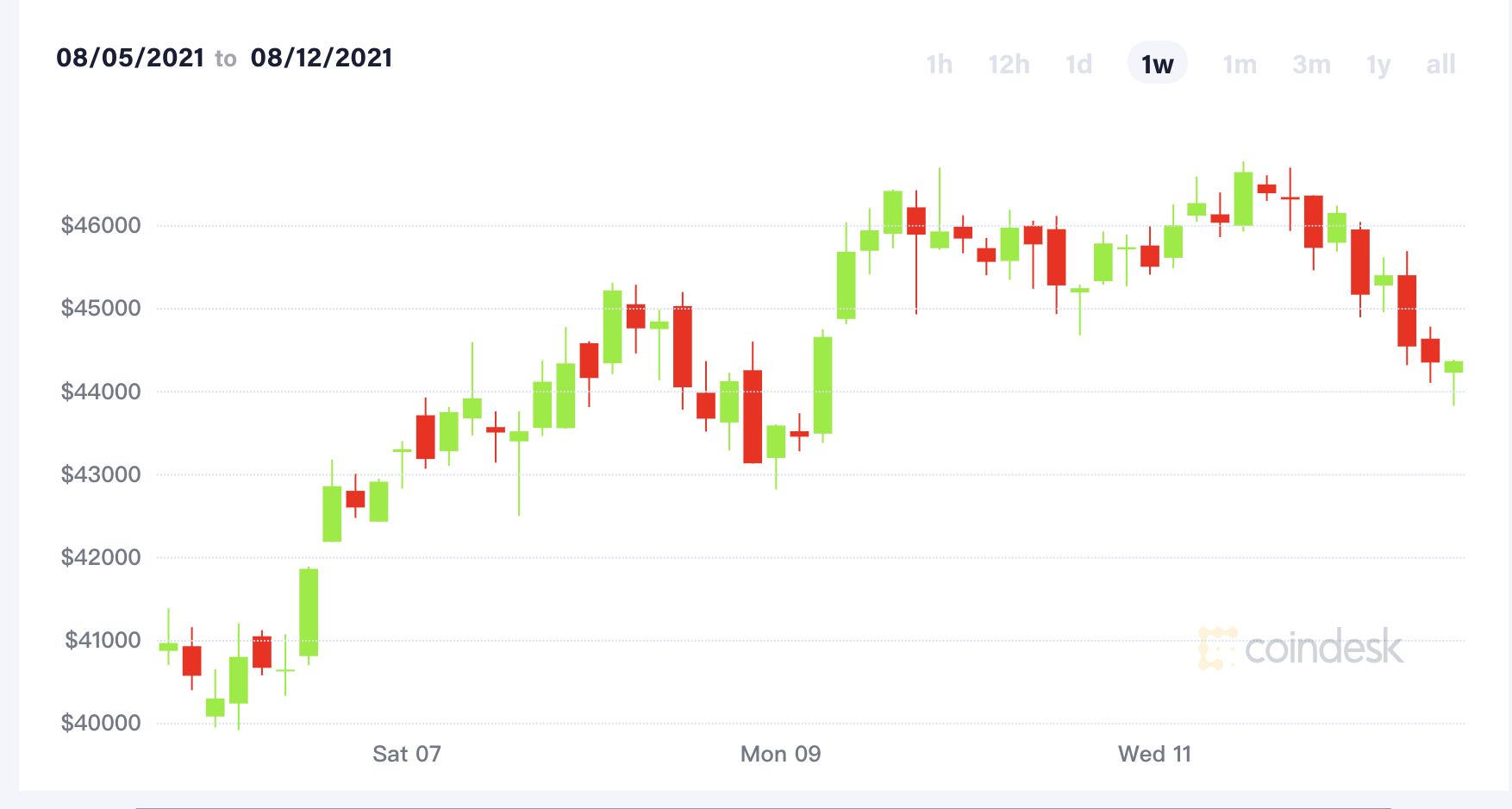 Bitcoin (BTC) was lower for a third straight day, slipping toward $44,000 after the largest cryptocurrency by market value reached a three-month high of nearly $46,800 earlier this week.

“There just isn’t much of an appetite right now for bitcoin above $46,000, but you’re not seeing a massive sell-off either,” Matt Blom, head of trading at the digital-asset firm Eqonex, said Thursday in a Zoom interview.

Prices for ether (ETH), the native cryptocurrency of the Ethereum blockchain and the second-biggest crypto overall by market cap, were also down, holding just above the $3,000 mark as of press time.

“The crypto market is taking a breather after a week of positive price performance,” investment-research firm FundStrat wrote in an emailed note.

Developments on the regulatory front continued Thursday as U.S. Rep. Anna Eshoo (D-Calif.) asked House Speaker Nancy Pelosi (D-Calif.) to amend the crypto tax provision that was in the Senate’s infrastructure bill in an open letter.

Eshoo, described by Politico in 2014 as “Pelosi’s closest friend in Congress,” wrote that the current definition of the term “broker” for crypto tax reporting purposes is too broad and may be difficult for some entities to comply with, CoinDesk’s Nikhilesh De writes.

Under the current terms of the provision, any entity that facilitates a crypto transaction on behalf of another person would be treated as a broker, meaning they would have to file specific tax information reports that would include know-your-customer details. Industry proponents are concerned that the definition of brokers would include miners and other network validators and hardware developers who don’t typically have access to customer information.

Some observers have argued that the crypto industry’s pushback against the legislation shows the growing clout of a fast-developing industry that’s accumulating power with growing wealth.

“We expect investments in legal, compliance and government relations to increase and for innovation in decentralized platforms to accelerate following this battle on Capitol Hill, as crypto further entrenches itself into the mainstream consciousness,” FundStrat wrote this week.

According to a report by the accounting firm KPMG, investments in blockchain and crypto reached $8.7 billion this year through June 30. That amount already exceeds the $7.2 billion put into the industry in all of 2020.

One of the big winners of new funds is crypto-focused regulation technology, according to the report.

TaxBit, a startup that provides reporting software to the Internal Revenue Service (IRS) and a bevy of institutional clients, said Thursday it had raised $130 million in a Series B round of funding that values the company at $1.33 billion, as reported by CoinDesk’s Danny Nelson.

More than half of the over $600 million drained from decentralized finance platform Poly Network earlier this week has now been returned, CoinDesk’s Jamie Crawley writes. Some $342 million had been returned as of 08:18 AM UTC Thursday, according to a tweet by Poly Network.

The hacker or hackers began returning the funds on Tuesday to wallet addresses across the three blockchains. The amount returned includes $4.6 million on Ethereum, $252 million on Binance Smart Chain and $85 million on Polygon. The $268 million still outstanding is on Ethereum.

In messages posted within transaction data on the Ethereum blockchain, the purported attacker or attackers wrote that they carried out the exploit “for fun.”

“I am not very interested in money!” according to the message posted by the Ethereum address now identified as “Poly Network Exploiter 1.” “I know it hurts when people are attacked, but shouldn’t they learn something from those attacks?”

Are cryptocurrency miners betting ETH 2.0 still a ways off?

Public bitcoin mining companies Hut 8 and Hive are increasing their capacities to mine ether. In the meantime, makers of mining machines like Bitmain and Innosilicon are set to release new ethereum mining machines later this year.

That investment may seem strange, given that the Ethereum system is scheduled to migrate from proof-of-work (POW) to proof-of-stake (POS) in five months, and POS mining does not require such advanced machines. The rising demand might be attributed to expectations that the migration will be delayed, industry pros said.

“We were told mining was going to end four years ago and it is still going,” said Mark D’Aria, CEO of Bitpro Cryptocurrency Consulting, which focuses on brokerage and management of Ethereum mining hardware. “It has always been a wait-and-see approach – things tend to take longer than everyone expects.”

KPMG’s report showed that investments in blockchain and crypto in the first half of 2021 exceeded the total for each of the previous three years. The “Pulse of Fintech H1’21” report published Thursday said that the $8.7 billion in investments for the six months ended June 30 compares with whole-year totals of $7.2 billion, $5 billion and $4.3 billion for 2018, 2019 and 2020 respectively.

“Persistent” inflation is the opposite of “transitory”

In the wake of Wednesday’s U.S. government report showing moderating consumer prices in July, some economists are worrying aloud that some increases may be enduring – a signal that faster inflation might not be as temporary as top Federal Reserve officials led by Chairman Jerome Powell have predicted.

Inflation is a topic that’s relevant to bitcoin investors who argue the cryptocurrency’s price should rise as the U.S. dollar’s purchasing power declines.

According a Bank of America report on Thursday, “transitory” drivers of inflation ebbed in July as used-car prices slowed to a 0.2% increase from June, while airline fares edged down 0.1%. Both came in below the 0.3% increase in the core consumer price index, which excludes volatile food and energy prices.

But the bank’s economists went on to note that “stickier and more persistent components of inflation were solid.” Those included owners’ equivalent rent and medical-care services, which both rose 0.3% month-over-month.

“In other words, both transitory and persistent inflation are running at historically elevated levels,” the Bank of America economists wrote.

Mohamed El-Erian, chief economic adviser at the German financial giant Allianz, wrote in a column for Bloomberg Opinion that “the heightened inflation watch is far from over.” One possibility is that employers could be forced to pay higher wages to attract and retain workers, and that they would eventually try to pass through those higher labor costs to consumers.

“It would be better to tilt toward what company after company has been saying about cost and price pressures rather than rely on macroeconomic models that inevitably struggle to capture pandemic-related changes,” El-Erian wrote.