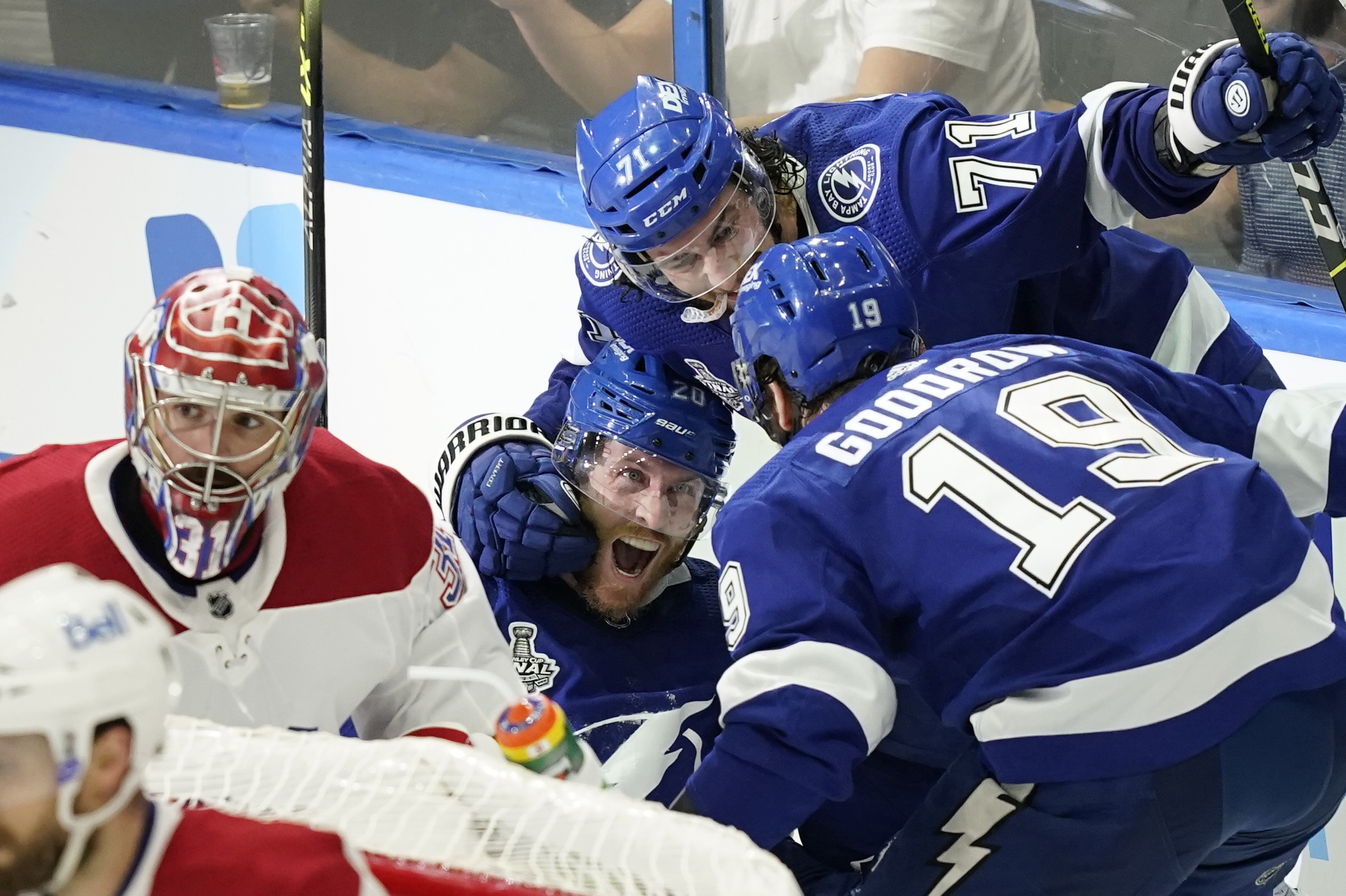 TAMPA, Fla. — Andrei Vasilevskiy tried not to think about needing to outduel Carey Price while the Montreal Canadiens were making him make one difficult save after another.

Blake Coleman had no time to think when the clock was running out in a terrible second period for the Tampa Bay Lightning before singlehandedly putting his team on top.

No thinking, just winning turned out just fine for the defending champions. Vasilevskiy made a playoff career-high 42 saves to keep Tampa Bay in it, Coleman scored a one-armed, diving buzzer-beater for the winning goal and Tampa Bay took a two games to none lead in the Stanley Cup Final by beating Montreal 3-1 on Wednesday night.

“Whatever happens win or lose, I’m just trying to go out there and play my best game, and now we’re up two games,” Vasilevskiy said. “It doesn’t matter: up two games, down two games, it’s the same routine, same compete level.”

As defenseman Ryan McDonagh said, “Thankfully, there was one guy that had his level where it needed to be” when the rest of the Lightning did not. The Canadiens outshot Tampa Bay 43-23 and dominated long stretches of play, but they head home for Games 3 and 4 in Montreal needing to win at least one to avoid being swept by an opponent that can win many different ways.

“The message is, ‘Don’t stop doing what we’ve been doing all playoffs,” said Canadiens veteran winger Corey Perry who lost to the Lightning in the 2020 final with Dallas. “You continue to play your game, continue to do the things that got you here, you’re going to be successful.”

It was more Montreal’s style of play to give up a ton of shots, rely on Price to bail them out and buckle down with any kind of lead. Days after coach Jon Cooper said, “Part of our success has been trying not to rely on Vasilevskiy,” they did just that in Game 2 of the final, and it worked.

Chants of “Va-sy! Va-sy!” from the crowd of 17,166 echoed through Amalie Arena after the Vezina Trophy runner-up made one difficult save after another and finished with a . No player got a bigger roar during pregame introductions, and he was the focus all night with the Canadiens flinging the puck at him from all angles in a much better performance than the series opener.

“It’s no secret he’s the reason we were still in this game,” Coleman said about Vasilevskiy. “(Then) we made the big plays when it mattered.”

But the Lightning showed again why they’re the champs and favorites to repeat by taking blow after blow and responding. Missing fourth-leading scorer Alex Killorn because of an injury from Game 1 and with defenseman Mikhail Sergachev and forwards Tyler Johnson and Ross Colton wincing in obvious pain, Tampa Bay managed to beat Price three times on goals by Anthony Cirelli, Coleman and Ondrej Palat despite a major shot discrepancy.

Cooper said, “Our team game was off.” And the Canadiens were on.

“I thought we played a pretty solid game all around,” Montreal captain Shea Weber said. “We did make a couple of mistakes that obviously hurt us. They’re an opportunistic team that can make you pay. But I definitely thought we deserved a little bit better.”

Coleman’s goal made all of that moot. With the clock running down at the end of the second, Barclay Goodrow put the puck around Montreal defenseman Ben Chiarot and sent the puck over on a rush to Coleman, who fought off Phillip Danault to bat the puck past Price and put the Lightning up 2-1 at the end of one of their worst periods of the playoffs.

“I knew the clock was winding down,” Coleman said. “I don’t think anybody’s planning to dive anywhere on the ice, but at that time it’s all we had.”

The Lightning didn’t have much going at that stage of the game. Turnovers, lost puck battles and other mistakes added up — but not to a loss for Tampa Bay because of the dominant play of Vasilevskiy, who was perfect except for another fluky bounce goal when Nick Suzuki’s shot pinballed in midway through the second.

Suzuki tied it for Montreal after Cirelli put the Lightning on the board a few minutes earlier. Cirelli’s seemingly harmless point shot found its way through traffic and beat Price on just the Lightning’s sixth shot of the night.

When Palat scored to make it 3-1 with 4:18 left on the Lightning’s 21st shot fans jeered, “Ca-rey! Carey!” at Price, and the Lightning improved to 13-2 this postseason when leading at the second intermission.