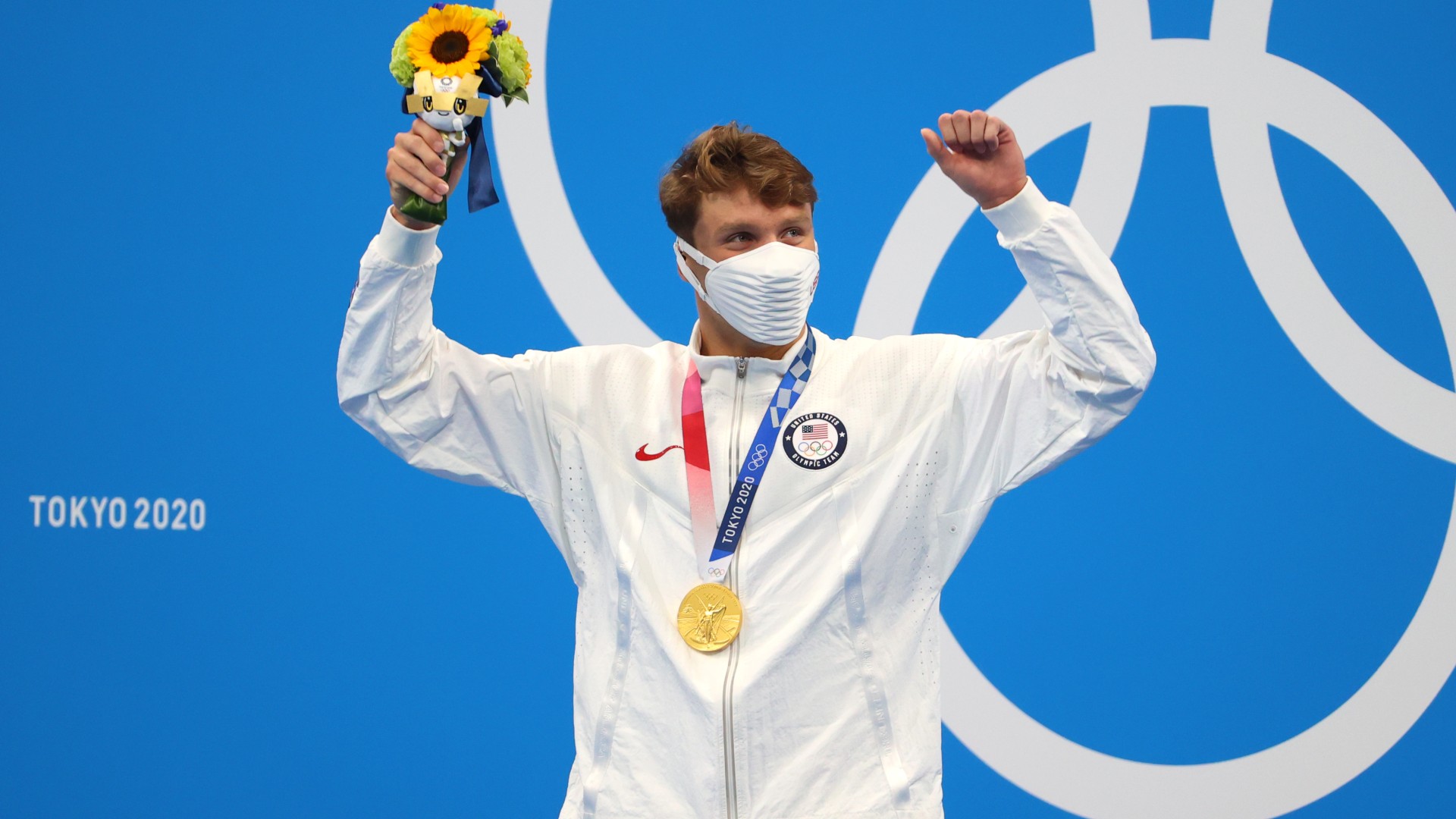 American swimming fans knew coming into the 2021 Tokyo Olympics that there were a few swimmers they could count on for medals.

There was Katie Ledecky, the most accomplished women’s swimmer of all time. There was Caeleb Dressel, the fastest sprint swimmer in the world. There was Ryan Murphy, who won both backstroke races in the 2016 Olympic Games. There was Simone Manuel, one of the world’s most dominant freestyle swimmers. And there was Lilly King, the world record-holder in the 100-meter breaststroke and reigning Olympic gold medalist in the race.

But every year, new talent cycles into the mix and helps the United States in its pursuit to hold more medals than any other nation in swimming. This year, especially with swimmers such as Michael Phelps, Ryan Lochte, Maya DiRado and Missy Franklin not on the American roster, there were a number of new swimmers who earned medals for the United States.

Stock Market Pioneer takes a look at those breakout swimmers who made a mark competing in their first Olympics:

Michael Andrew just missed reaching the Olympics when he was 17 years old at the 2016 Olympic Trials, but he more than made up for it in the 2021 trials. He was second only to Dressel in the 50-meter freestyle to earn a spot in the race, and then qualified as the top swimmer in both the 100 breaststroke and the 200 individual medley. The 22-year-old continued that successful run into the 2021 Tokyo Olympics, finishing third overall in his 100 breaststroke semifinal heat to earn the fifth seed in the final. He finished fourth in the final race, 1.47 seconds behind now-two-time gold medalist and world record-holder Adam Peaty.

Andrew later reached the final in the individual medley as the fourth seed and ultimately placed fifth at 1:57.31. Andrew also reached the final in the 50 freestyle and finished fourth at 21.60, just 0.53 behind Dressel. He finally picked up that first medal when he swam the breaststroke in the men’s 4×100 medley relay and helped deliver a world record and gold medal to the U.S. at 3:27.28.

The University of Virginia placed two women on the U.S. Olympic swimming team in Kate Douglass and Alex Walsh. Douglass earned the second spot on the team in the 200 individual medley, but from there, the two swimmers exchanged top times. Douglass came out of the prelims with the top time of 2:09.16, and maintained her top seeding heading into the final with a time of 2:09.21 in the second semifinal.

Douglass got off to a fast start in the 200 individual medley final by sitting at second after the first 50 meters, but fell back to sixth on backstroke. She moved up to third at the finish to earn the bronze, a spot behind Walsh and 0.52 behind Japan’s Yui Ohashi for the gold.

The Olympic men’s slate has never featured the 800 freestyle until this year. American Bobby Finke entered the race with the 12th-fastest entry time at 7:47.58 and without a major international medal to his name. That didn’t stop the Florida Gator from posting a time of 7:41.87 to win the gold medal in the 800 freestyle, despite not even being among the top three swimmers after the final turn.

That one gold wasn’t enough for Finke. He raced the 1500 freestyle as well and again bided his time until he was ready to strike. Despite racing in third place most of the race, he moved up to second place with 50 meters to go and posted a 25.78 50 split on his final stretch to win his second gold. He finished at 14:39.65, more than a second over Ukrainian Mykhailo Romanchuk, who won silver. Finke is only 21 years old and, as the United State’s top men’s distance swimmer, should be in a position to race these events again in 2024.

An Alaskan swimmer had never before qualified for the Olympics until 17-year-old Lydia Jacoby made the team in the 100 breaststroke as the second American in the event. It didn’t help Jacoby that she was joined by world record-holder and reigning gold medalist in the event, Lilly King, on the team. That didn’t stop her from making her mark, earning the second-fastest time in the prelims of the race and the third-fastest time in the semifinals. When it was time to race the final, Jacoby fell behind King and South African Tatjana Schoenmaker, but surged late to pass both swimmers and win the gold medal at 1:04.95.

Jacoby capped off her Olympics by racing in the mixed 4×100 medley relay — losing her goggles in the process — before putting the United States in first during her breaststroke split in the women’s 4×100 medley relay. That unit ultimately finished with silver, just 0.13 behind Australia. She’ll be 20 when the Summer Games come around again, so expect to see her coming back with a chance to add more medals to her name.

Another star swimmer from the University of Florida, Kieran Smith earned the top spots on Team USA in the 200 and 400 freestyle races, and made the most of his time in Tokyo. He shined on the first day of swimming when, in the 400 freestyle, he earned a spot in the final. Swimming out of Lane 7, he shot all the way up to third overall with a time of 3:43.93 to earn the bronze and come just 0.58 from winning gold.

In a difficult men’s 200 freestyle field, Smith placed second in the second semifinal behind only Great Britain star Duncan Scott and ultimately earned the second overall spot in the Olympic final in the event. He finished sixth overall in the final, but with a time of 1:45.12, he was just a 0.90 second back of Great Britain’s Tom Dean, who won gold. Smith also led off the U.S.’s 4×200 freestyle relay and put the team in first with a split of 1:44.74, though the relay wound up placing fourth.

The big breakout for Regan Smith came in the 2019 World Aquatics Championships, when she set the world records in both the 100 and 200 backstroke, though the former has since been taken down. But this was the largest stage Smith has been on, and the 19-year-old Minnesota product made her mark on the games. Smith earned her first Olympic medal with a silver in the 200 butterfly and added a bronze in the 100 backstroke — she didn’t qualify in the U.S. Olympic Trials for the 100 backstroke.

Smith also led off the women’s 4×100 medley relay and helped push the unit out to a fast start on backstroke. She picked up the silver medal in that race when the unit finished second at 3:51.73. She is already an immensely accomplished teenage swimmer and will give the U.S. women a dominant backstroke and butterfly swimmer for years to come.

Ledecky remains the best swimmer of the 1500 freestyle in the world, but Erica Sullivan showed on the Olympic stage that she can hang with Ledecky in the mile race. Sullivan made the team as the event entered the Olympics for the first time; she swam the third-fastest time in the prelims at 15:46.67, just over 11 seconds back of Ledecky. But Sullivan only got stronger as she swam the event more.

Racing in the final, she was in fifth place for most of the race until the 1,150-meter mark, when she moved up to fourth. She steadily kept getting faster, moving up to third and ultimately finishing second in the race to take the silver medal. Her time of 15:37.34 was about four seconds back of Ledecky’s mark and a second-and-a-half up on the third-place swimmer, Amy Kohler from Germany. Sullivan will be a name to watch in the distance events moving forward.

Alex Walsh has stayed close with her UVA teammate in the 200 individual medley since the Olympic Trials. Walsh barely led over Douglass at 2:09.30 to 2:09.32 to earn the top spot on the team. Walsh earned a swim in the semifinals after posting the third-fastest time in the prelims at 2:09.94. In the semifinal, she swam at 2:09.57 to earn the top time in her heat and earn the third overall seed in the final race. Racing in the lane above Douglass, Walsh had the lead at one point in the race before Ohashi won the freestyle leg to finish at 2:08.52, but Walsh was just 0.13 behind the gold medal time and earned the silver.

Another impressive 19-year-old for the United States, Emma Weyant stunned many at the Olympic Trials when she beat three 2016 Olympic swimmers to earn the top spot in the women’s 400 individual medley. She backed up that performance by swimming the fastest time in the prelims at 4:33.55 to earn the top seed heading into the Olympic final. Weyant was narrowly edged out in the final by Ohashi at 4:32.08 to 4:32.76, but she put more than 2 seconds between her and teammate Hali Flickinger, who won the bronze medal in her second trip to the Olympics. She adds to the large array of versatile American swimmers that the U.S. can expect to have competing for Olympic gold in 2024.