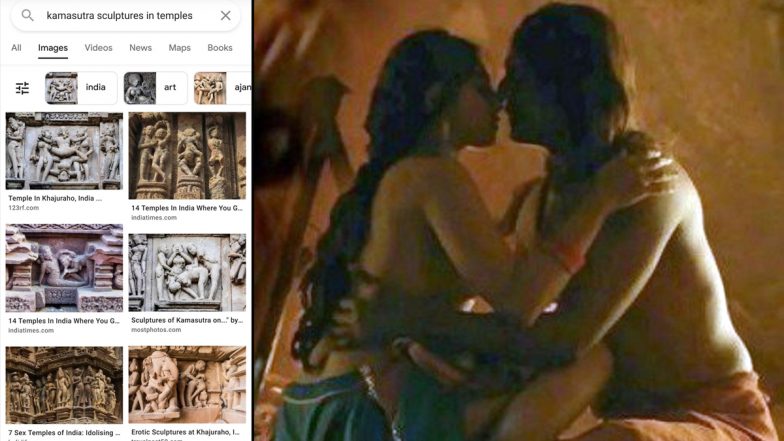 Radhika Apte is trending on Twitter. However, this time the actress is not making noise for a new project, but for a strange reason. On Friday (August 13), Apte found herself amid a controversy when #BoycottRadhikaApte was among the top trends on the micro-blogging site. After sensual pictures from her film Parched went viral on the web, Twitterati slammed her for doing intimate scenes and insulting Indian culture. Netizens are demanding a ban on the actress for doing nude scenes. However, even after this uproar, she has found full support from her fans. Forensic: Vikrant Massey and Radhika Apte Team Up for the Hindi Remake of Tovino Thomas’ Malayalam Hit (Watch Motion Poster).

While at one side a section of Twiterati’s objected over Radhika’s adult pics from the film, on the other hand, her admirers shared Khajuraho (Hindu and Jain temples) pictures to show their support for the actress. For the unware, Radhika Apte’s body of work is on the experimental side wherein she likes to portray unconventional roles on the screen. Here’s how fans are supporting RA. Check it out. RIP Sushant Singh Rajput: #BoycottBollywood Trends on Twitter as Netizens Slam Industry For Not Accepting the Late Actor.

Where is the sense bro ?

👇This is our culture not this 👇 pic.twitter.com/5yZhAnwDgG

Then why this photo In our temple pic.twitter.com/OT8eOhrLdX

Those who are Trending #BoycottRadhikaApte should see this 😂

Why to bring everything on Social Media. There is so much on Internet, it’s up to u to watch it or not. Don’t club anything vid culture, it’s is rich, 1 or 2 TV show can’t malign it.

So I don’t support #BoycottRadhikaApte.

Talking about Parched, it was helmed by Leena Yadav wherein it discussed social issues like child marriage, dowry, marital rape and abuse. So, do you agree with #BoycottRadhikaApte trend on Twitter? Tell us your view in the comment section below.

(The above story first appeared on Stock Market Pioneer on Aug 13, 2021 01:36 PM IST. For more news and updates on politics, world, sports, entertainment and lifestyle, log on to our website stockmarketpioneer.com).