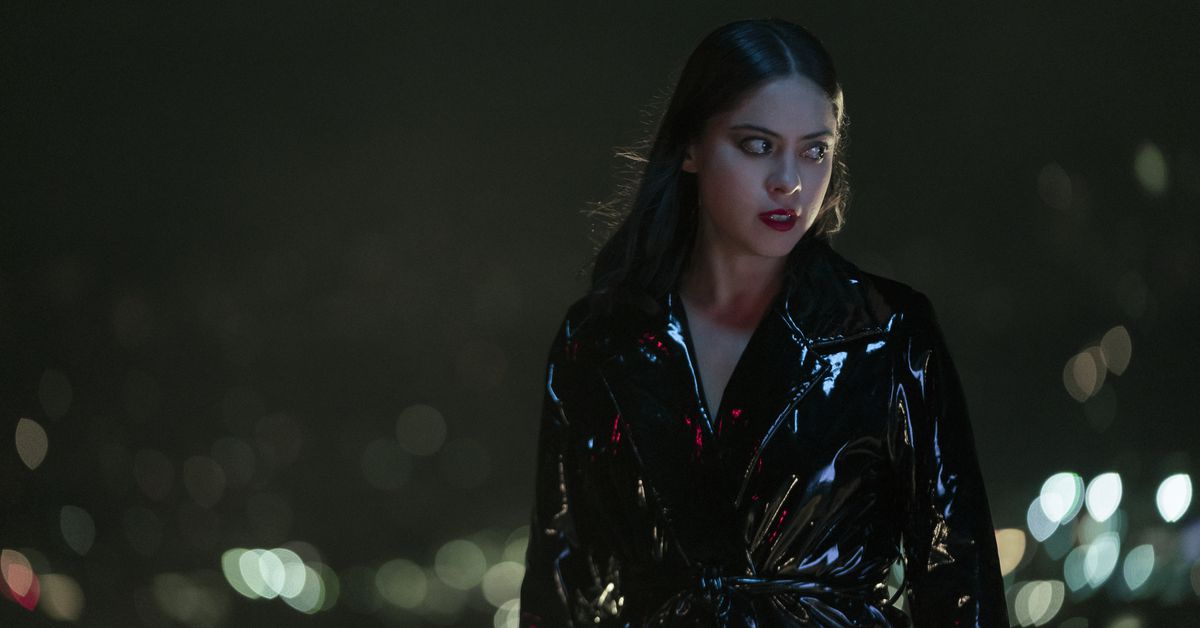 In almost every one of the eight episodes in Netflix’s limited series Brand New Cherry Flavor, the protagonist barfs up a live kitten. That isn’t a euphemism. Each time, she doubles over, convulses in pain, and heaves until a slimy mass exits her mouth and splats on the floor. Upon closer inspection, it’s always a writhing newborn kitten with wet white fur. A zombie then surreptitiously collects the kitten and brings it to a witch, who drinks its blood. It’s important to know all this beforehand diving into the show, because this isn’t the wildest thing Brand New Cherry Flavor has in store. Things get wilder. And considerably grosser.

That isn’t necessarily obvious from the start. Brand New Cherry Flavor begins plainly by comparison: Movie director Lisa N. Nova (Alita: Battle Angel star Rosa Salazar) arrives in early-’90s Hollywood with a shocking short film under her belt, determined to expand it into a feature debut. Much of the first episode is dedicated to the work that goes into getting noticed in Hollywood: parties and meetings and conversations over drinks, all of it suspect and drenched in ominous light, because exploitation is in the very air. Then Nova meets producer-director Lou Burke (Eric Lange) who agrees to help her realize her vision. But he betrays her, so she asks a witch (Catherine Keener) to curse him, which ends up costing more than Nova bargained for.

The first and easiest mistake in sizing up this occult horror-noir from Channel Zero creator Nick Antosca and Lenore Zion would be to reduce it to its overly apparent influences. Put frankly, Brand New Cherry Flavor comes across as a shameless ripoff of Davids Lynch and Cronenberg. The former is evident in the lens the series takes to Los Angeles, one obsessed with foreboding, winding highways and nonsensically dreamy imagery. The latter comparison comes when Brand New Cherry Flavor digs into its occult elements, all of which come with a healthy amount of body horror.

Brand New Cherry Flavor — the mildly obnoxious title comes from the novel of the same name by Todd Grimson, but is never really explained — isn’t terribly clever in cribbing from two of cinema’s most beloved weirdo auteurs. Most of its imagery recalls better projects like Mulholland Drive or eXistenZ, but Antosca and Zion’s commitment to telling a deeply unsettling occult story is, for lack of a better word, bewitching.

In spite of the seemingly endless possibilities brought on by the streaming era, I’m hard-pressed to think of the last thing I saw that was this fucking gross. Stews of raw rodent entrails are consumed, repulsive substances are extracted and injected, and there’s a sex scene I’d rather not talk about. This makes Cherry Flavor feel disorienting and oppressive in a way that mirrors Lisa Nova’s descent into Los Angeles’ occult underworld, where horrible things are done in exchange for power and influence.

But Brand New Cherry Flavor lingers beyond that initial shock of revulsion. It’s a story about power and exploitation, a dark revenge thriller about a woman who wants to punish the powerful man who iced her out of her own dream. The series uses its occult twist to complicate its story in compelling ways. Its portrayal of art and witchcraft aren’t that dissimilar: The show’s characters view both as selfish acts that always come at a steep cost, one that the perpetrators might not be willing to pay.

The barfed-up kittens are a metaphor, of course. Boro, the witch, tells Lisa that there’s something special inside of her, and that the price of the curse Lisa seeks will be a regular taste of that essence. Lisa doesn’t make anything after arriving in Los Angeles, but the story never lets the audience forget that she is an artist, and that her art cost something. Across eight episodes, the writers of Brand New Cherry Flavor argue that these are both dangerous things: People should be careful when they’re about to commit an act of witchcraft or art, because they never know what they might find spilling from their mouths further down the line.