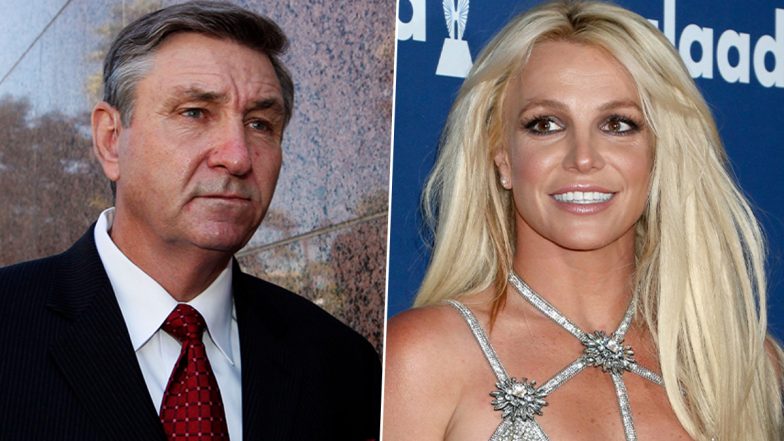 Grammy winning-singer Britney Spears’s father Jamie Spears has shared that he is willing to step down as the conservator of her daughter’s estate. According to the latest court filing (August 12), obtained by E! News, Jamie has agreed to remove himself as conservator of her estate “when the time is right,” after holding the position since her conservatorship began in 2008 after the singer had several mental breakdowns publicly. Britney Spears Plans To Step Away From Social Media After Struggling With Negative Comments (View Post).

In the documents, Jamie’s legal team has stated that there are “no actual grounds for suspending or removing Mr. Spears,” but he is willing to step aside in the future to avoid a “battle” with his daughter. The statement further read, “It is highly debatable whether a change in conservator at this time would be in Ms. Spears’ best interests. Nevertheless, even as Mr. Spears is the unremitting target of unjustified attacks, he does not believe that a public battle with his daughter over his continuing service as her conservator would be in her best interests.” Judge Denies Britney Spears’ Request to Move Up Hearing to Remove Father From Conservatorship.

“So even though he must contest this unjustified Petition for his removal, Mr. Spears intends to work with the Court and his daughter’s new attorney to prepare for an orderly transition to a new conservator,” the statement continued. E! News reported that the matter is expected to be discussed and “potentially finalised” at her September 29 court hearing. Reportedly, with the help of her new lawyer- Mathew Rosengart, the 39-year-old songstress would be free of Jamie’s legal control over her career.

Britney’s father served as both a conservator of her estate and person for more than a decade, but, in 2019, he temporarily stepped down as manager of her person due to his own health issues. Jodi Montgomery temporarily took his place for the past two years. In her last month’s court hearing, Britney gave a bombshell testimony telling a judge to charge his father with conservatorship abuse as he was “ruining” his life and she wants to get rid of him.

“I want him investigated. This conservatorship has allowed my dad to ruin my life,” she told in her testimony. According to E! News, on July 26, Britney’s new lawyer- attorney Mathew Rosengart filed the official court petition to request the removal of Jamie as conservator of the songstress’s estate. On a related note, the ‘Gimme More’ singer nominated professional fiduciary and certified public accountant Jason Rubin to take his father’s place- as the conservator of her estate.

After the big news came out that Jamie is intended to step down as Britney’s estate conservator, the singer’s lawyer Mathew released a statement on August 12 that read, “I announced in Court on July 14 that, after 13 years of the status quo, it was time for Mr. Spears to be suspended or removed as conservator and that my firm and I would move aggressively and expeditiously for that outcome.” As per E! News, Mathew said he filed papers to suspend Jamie.

“Based on strong, insurmountable legal grounds, which were unequivocally supported by the law and all parties involved, including Jodi Montgomery, Britney Spears, and her medical team,” the statement further read. Mathew added, “We are pleased that Mr. Spears and his lawyer have today conceded in a filing that he must be removed. It is vindication for Britney. We are disappointed, however, by their ongoing shameful and reprehensible attacks on Ms. Spears and others.” Jamie’s team also shared a statement further to Jamie’s response to the petition.

His team wrote that Britney was “in crisis” and “desperately in need of help” when the conservatorship began. “Not only was she suffering mentally and emotionally, but she was also being manipulated by predators and in financial distress. Mr. Spears came to his daughter’s rescue to protect her. Mr. Spears has always done what he believes was in his daughter’s best interests,” the statement read. E! News reported that according to Jamie, the conservatorship saved the ‘Toxic’ artist from “disaster,” but “recently much has changed” as she has “vocalized a desire to end the Conservatorship.”

The legal document further stated that Britney’s father should not be suspended or removed “and certainly not based on false allegations.” Instead, he is “willing to step down when the time is right.” The statement read, “The transition needs to be orderly and include a resolution of matters pending before the Court,” and he asks the judge to deny Britney’s petition to remove him.

I’m so happy to hear this news. 👏❤️ It’s been so long overdue but I’m so glad that Britney is on her way to finally being free. Sending so much love! 👸🏼💕✨ #FreeBritney https://t.co/VVDg6cdtGu

On a related note, Jamie previously had requested the court to investigate his daughter’s allegations that she had put on him in the testimony. Jamie’s lawyer, Vivian Thoreen, acknowledged Britney’s “suffering” during a court statement in June, saying he is “sorry” to see her “in so much pain” as he “loves his daughter,” as per E! News. During the recent hearing, Britney even expressed that if she couldn’t end the conservatorship altogether, she at least “wanted to remove her father completely out from the conservatorship”. (ANI)