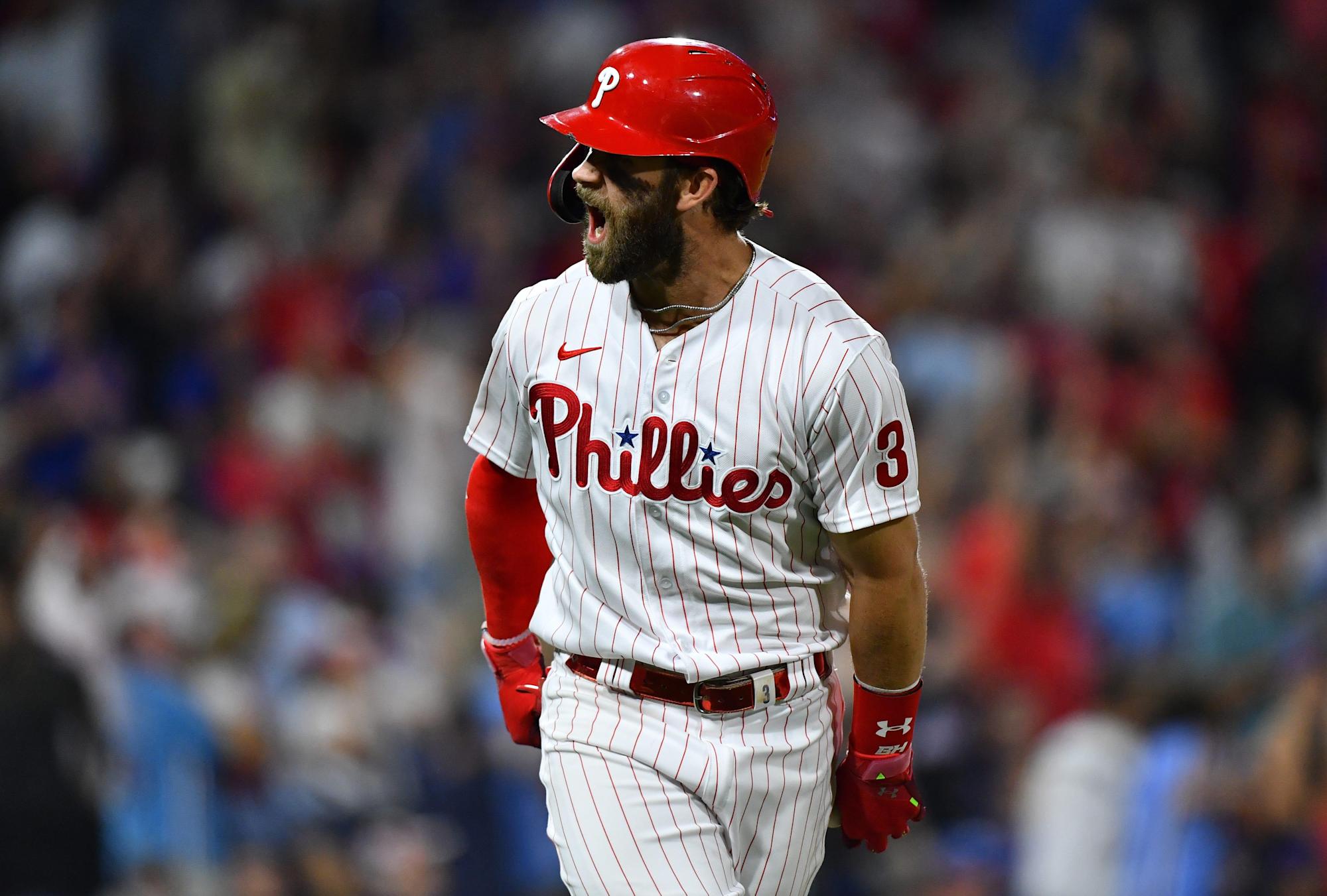 PHILADELPHIA – After having the run of South Broad Street during an oft-glorious summer, the Philadelphia Phillies must make room for one of their neighbors Thursday evening. The Eagles are back, opening their exhibition schedule against the cross-state Steelers, and once again the tones of “Fly, Eagles Fly” will dominate the sports complex.

In recent years, a grimmer theme unfolded that time of year over at Citizens Bank Park.

For the fourth consecutive year, the Phillies have arrived at this juncture of the season in playoff position, a recent eight-game winning streak stoking the faithful and pushing the club atop the National League East. In seasons past, the good times proved unsustainable: The Phillies, often betrayed by a putrid bullpen and September swoons from core performers, were pulled, almost magnetically, to the .500 mark or below, out of the playoffs and wondering what missing piece might have made a difference.

Might 2021 be any different for a franchise seeking its first playoff berth since the semi-dynastic, World Series-winning gang was escorted from the 2011 playoffs?

We will find out for certain over the final 30% of the schedule – a 48-game finishing kick during which the Mets and Braves must be held at bay – but there are reasons to believe:

MVP and Cy Young-caliber seasons from a $330 million outfielder and $117 million ace. Trade-deadline reinforcements for the pitching staff. A bullpen, perhaps, that may hum along efficiently rather than implode, like a Ford Pinto, on impact.

At 59-55, and now in a dead heat with the Braves in the East, the Phillies believe there’s no reason to fear what’s around the corner.

“It’s kind of cheesy,” admits reliever Archie Bradley, “but we’re all kind of pulling on the same rope right now. We have an underlying goal to win this division and we’re recognizing times in the game to capitalize and doing it.

“We’ve had what I feel like is a true coming together of everyone.”

An odd mix has coalesced, but despite an imperfectly-forged foundation, this may be their best window yet.

These Phillies were acquired over three front-office regimes, from Ruben Amaro Jr. to Matt Klentak to 65-year-old Dave Dombrowski, hired in December to helm baseball operations by owner John Middleton. Amaro pivoted from chasing one more World Series title with the Chase Utley-Ryan Howard-Jimmy Rollins group to an overdue rebuild, Klentak taking the baton and preaching patience, with all the trappings of a modern, analytics-driven approach.

Seven consecutive non-winning seasons have a way of changing plans, though, and when Middleton committed $330 million to Bryce Harper in March 2019, it was on. Eighteen months later, pitcher Zack Wheeler defected from the Mets on a $117 million deal. Then Dombrowski, with significant lobbying from Harper and others, brought back All-Star catcher J.T. Realmuto – acquired by Klentak in trade from the Marlins – on a $105 million, five-year deal.

Three nine-figure contracts, all for players poached from division rivals, makes for a unique nucleus. Throw in All-Star righty Aaron Nola and first baseman Rhys Hoskins – drafted by Amaro’s people back in 2014 – and the Phillies are a soup concocted from various stocks.

The mix can be off: Philadelphia is perpetually an arm or two short, due in large part to subpar drafting and developing young pitchers. On the other hand, you could argue the Phillies on hand are in their prime.

Wheeler, 31, has tossed two shutouts, leads the NL in innings (156) and strikeouts (181) and, should he merely keep showing up each fifth day in such form, will battle the Dodgers’ Walker Buehler for his first Cy Young Award.

They are seasoned but plenty spry.

“The fact they are on the younger side of guys who have four or five, seven years in the big leagues, helps them physically,” says manager Joe Girardi. “It’s what you want. And they’re playing like that.”

Along with the significant lucre, Wheeler factored all that into his decision to head south from Queens to Philly after the 2019 season.

“The core here – I wanted to join that,” he says. “J.T.’s the best catcher in the game. I wanted to throw to him. We’ve got the best right fielder in the game, I think. We’re all young – younger; I guess we’re getting a little older, baseball-wise – but we’ve been around a while. We can sort of help the younger guys through situations – game situations or off the field, we’re always here and available.

“Nobody’s a superstar or too big for the team, the game.”

‘This game’s not easy’

Third baseman Alec Bohm appreciates that. The third overall pick in 2018, Bohm had just 165 minor-league games under his belt when he was summoned to Philly during the pandemic-wracked 2020 season. He produced an .881 OPS and was Rookie of the Year runner-up.

Yet 44 games did not afford him the chance to struggle. This year has changed that.

Bohm batted just .209 with just 11 extra-base hits in his first 57 games while struggling at third. With Hoskins on the injured list with a minor groin injury, Bohm started at first Wednesday night against the Dodgers and essentially cost them the game, misplaying two balls that directly led to four runs in a 8-2 loss. Girardi double-switched him out of the game for the second time in a week.

Works in progress are challenging with a team desperate to win now.

“This game’s not easy,” says Bohm. “It will beat you up and it’s not forgiving and the ball will find you and you’re going to make mistakes. Everybody makes errors. Everybody will end up going 0 for 20. It’s baseball. You stay upbeat, and get through it and find a way to fight out of it faster than the others.

“That’s the difference. And that’s what I’m trying to figure out.”

The Phillies need Bohm’s bat, but in adding groundball pitcher Kyle Gibson at the deadline, increased the likelihood the ball would find him, as it did Wednesday.

“He’s going to get better and he’s not going to have a choice, with the work we’re going to do with him. He’s had to learn at a fast pace.”

Same as it ever was?

The 2019 Phillies also were 59-55 at this juncture; they were tied with Milwaukee for the second wild-card spot.

Last year, with 30% of the 60-game pandemic season to go, they were 22-20, 2 ½ games out of first, and in second place during an expanded playoff season in which second guaranteed a playoff spot.

That bullpen was the worst of the worst, finishing 30th in the majors with a 7.06 ERA and tied for first in blown saves.

Over these four seasons, the Phillies ‘pen has never finished in the upper half of the NL in almost every meaningful metric. This year, their 4.57 mark ranks 10th in the NL and 20th in the majors.

Yet the trade-deadline acquisition of closer Ian Kennedy added crucial definition to the bullpen, moving struggling ninth-inning guy Hector Neris to a more comfortable role while Bradley and J.D. Hammer settled into set-up spots. Meanwhile, occasional closer Ranger Suarez was stretched out to fill a hole in the ever-shifting rotation.

It also prompted the unit to stop chasing the past.

“I wanted to come in here and change this bullpen around,” says Bradley, who was signed to a one-year, $6 million deal and has posted a 2.67 ERA. “But it’s not just one guy. This last month, we’ve really come together as a ‘pen. We defined our roles. And together, we dropped that standard of, ‘All right, we’re going to fix the ‘pen.’ It’s like no, we’re going to win today.

“We’re going to focus on today and not focus on trying to fix what’s been going wrong here the last few years. Singular focus.”

The best bullpen days are the ones that require no work, and Wheeler has afforded them three of those. His shutout of the Mets – he admitted to relishing that a little more – capped that eight-game win streak that catapulted Philly atop the division.

Now, he is poised to snag the NL Cy Young that former teammate Jacob deGrom twice claimed. It would cap a stirring climb uphill for Wheeler, who missed two seasons after 2015 Tommy John surgery.

Eventually, he learned to command his fastball, which allowed him to buttress his off-speed pitch. And in his down time, Wheeler watched – and learned.

“You watch Scherzer, you watch Kershaw, you watch deGrom – all these great pitchers, they go right after guys,” says Wheeler, whose fastball routinely runs up to 98 mph, making his slider-changeup offerings devastating.

They usually don’t. Opponents are batting .212 against him, and Wheeler’s 0.99 WHIP comes with a major league-leading innings pitched total. If anyone can be a difference-maker into October, it’s him.

If not, well, the Phillies will try again. For now, they still have a golden opportunity to finish what they couldn’t.

And maybe this imperfect team will relegate football season to second fiddle a little longer in South Philly, pushing away memories of past failures.

“Everybody’s here ready to play every day. It may not always show,” says Wheeler. “We may make a few errors in a game, or a bad game turns into a really bad game. But it’s baseball. It happens. At the same time, we’re back the next day, ready to win.

“That’s the key for a winning team. Ready to erase that.”