Sonnen has stayed loyal to his MMA roots and has predicted a win for Belfort. Speaking on his YouTube channel, Chael Sonnen stated the following:

“Speaking of Vitor (Belfort) and Oscar De La Hoya, you want an early prediction from me? I think Vitor beats him. I think Vitor is going to walk over there and beat him.”

Chael Sonnen has based his pick on two primary reasons. The first being his confidence in Belfort’s boxing skills. We recently saw Ben Askren attempt to crossover into boxing from MMA. However, even in his prime, Askren was a wrestler first and foremost. His lack of boxing acumen showed as he was knocked out in one round.

However, Sonnen does not believe that will be the case in this fight. He stated the following:

“Vitor Belfort and his hands, I believe in them. I really do.. I wouldn’t argue that Vitor’s a better boxer than Oscar De La Hoya. I’m not insane.”

Chael Sonnen’s second reason for picking Belfort was due to the fact that De La Hoya has been absent from any kind of combat sport since 2008. Alternatively, Belfort last competed in 2018. He also had a fight scheduled to take place in 2020, meaning that he would have been in training at the very least.

“But how good is Oscar still? In all fairness, we only know a couple of things about Oscar. We know he didn’t leave boxing because he was too good at boxing. We know you don’t get better at something by not doing it. We know his numbers up there, I want to say he’s forty eight, if I’m wrong he’s forty nine. I don’t know how bullish I am on the idea that’s taking this as serious as he needs to.” 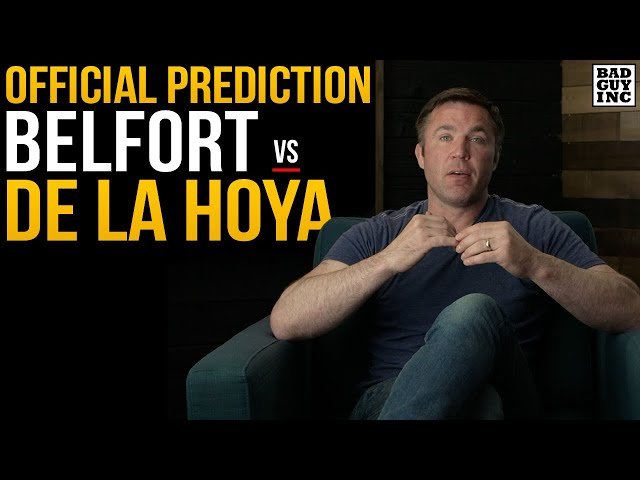 De La Hoya vs Belfort is set to take place under the Triller Fight Club banner this September. The location and venue is currently targeted to be Las Vegas. Triller are yet to make an official announcement on a specific date, or as to what fights will fill the undercard slots.

Will Chael Sonnen’s prediction come true? Or will De La Hoya prove him wrong? Sound off in the comments!