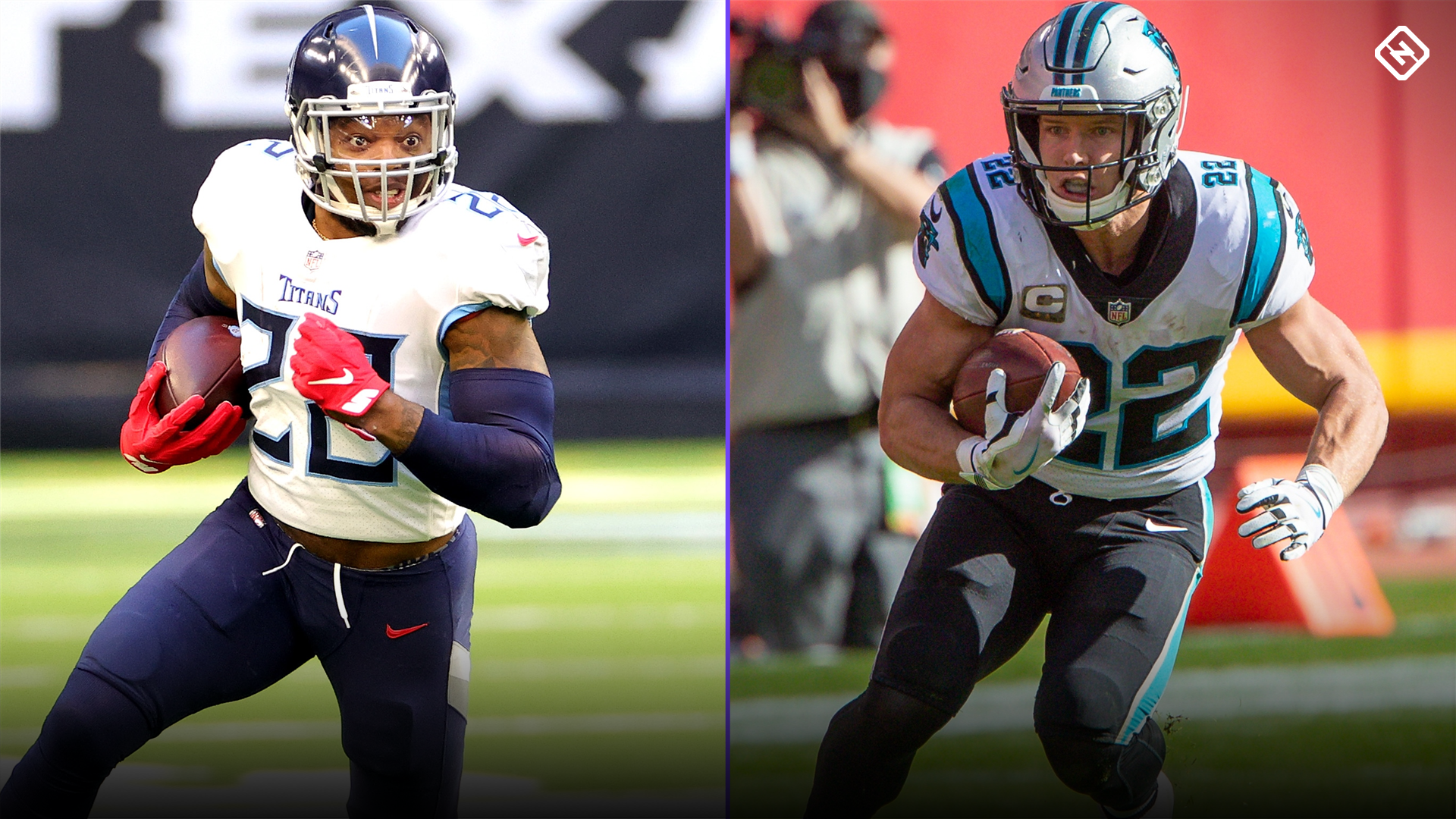 Derrick Henry and Christian McCaffrey both warrant considerations as the No. 1 overall pick in standard-league fantasy football drafts. In PPR, of course, McCaffrey easily edges Henry (though Dalvin Cook and Alvin Kamara are also in the mix). McCaffrey finished ’19 as the top dog in standard, while Henry sat comfortably at the top in ’20. While they’re both top-tier options, they earn their living in very different ways, and fantasy owners might be having a tough time figuring out who should top the RB rankings on their cheat sheets in 2021.

Below, we’ll compare the two (plus Kamara and Cook) and explain what might set them apart from the pack. It’s splitting hairs here, but when you’re on the clock with the No. 1 pick, you’ll have to make the crucial decision.

Who Should Be The No. 1 Overall Pick In Fantasy Drafts: Christian McCaffrey or Derrick Henry?

The case for McCaffrey

In 2019, McCaffrey was RB1 across standard and PPR formats, netting the second-best PPR season by an RB in NFL history (471.2 fantasy points). Four. Seven. One. In standard leagues, he produced 355.2 points, nearly four fantasy points per game (FPPG) ahead of No. 2, Derrick Henry. He’s a hybrid running back/receiver, and he’s been a shoo-in for 20-plus touches a game. The efficiency will be there, but even when it’s not, Carolina still feeds him the rock. In ’19 he accumulated 403 touches (25.19 per game) for north of 2,300 yards from scrimmage.

Sam Darnold is under center for the Panthers this year. What do we equate with Sam Darnold? Bad quarterback play. What helps bad quarterbacks get easy completions? Running back targets. McCaffrey is not only an elite dump-off target, but he’s also a true focal point in the passing offense, with plays drawn up specifically for him on a regular basis.

The case against McCaffrey

Last season, McCaffrey dealt with high-ankle, shoulder, and glute strains, limiting him to just three games. Is this a sign the Panthers may pull back the reigns on his touches a bit? It surely seems so, particularly in the early part of the season. Also, the Panthers now have a solid WR corps, which should mean more open receivers. As a domino effect, the dump-down frequency may see a slight dip.

Carolina also made sure to address the backup running back situation after the departure of Mike Davis. In the fourth round of the 2021 NFL Draft, they selected highly productive college RB Chuba Hubbard out of Oklahoma State. No, we’re not insinuating Hubbard is anywhere close to a threat to CMC’s job, but perhaps Carolina plans to spell him a little bit more, saving some of his bumps and bruises. It would be a smart move to start McCaffrey off with a smaller workload, letting him acclimate back after an injury-riddled season. Even if that’s the case, he’s still an elite option at the position. In 2021, we might see more games with borderline 20 touches, as opposed to knocking on the door of 30.

The case for Henry

He’s going to get the ball early and often (378 carries in ’20). One of the best things about Henry is he heats up when it matters most for your fantasy team. In September he averaged a mere 3.9 yards/carry. As we approach the colder months, with the defenses getting worn down, he elevates his game. In December, he was netting 5.9 yards/carry. This has been a common theme over the course of his career and certainly was during his 2,000-yard rushing season. Lastly, he doesn’t carry the same injury history around with him as the premier backs in the league. Think McCaffrey, Dalvin Cook, Saquon Barkley. He’s missed a grand total of one game since he became the full-time starter in Tennessee.

The case against Henry

The obvious negative for Henry is his lack of receiving skills and opportunities. Yes, we’re not discussing PPR here (for the record, we have him ranked fifth overall in full-point PPR formats), but his non-existent receiving role leaves extra yards on the table. If he had a strong receiving acumen, he’d be the easy choice for No. 1 across all formats. He must have a significant grip of the rushing title and continue to sit near the top of the rushing touchdown list to claim the No. 1 nod once again. It’s not that he can’t do it, but he has to continue to play at the highest level in order to pull it off. Can he really continue that, and when will the injury demon finally reveal its ugly head after 681 carries the past two seasons?

As our rankings show, we give Henry the nod as the No. 1 standard-league RB. Yes, the case against Henry presents some obstacles and worries about his future fantasy prospects, but how can we assume he’ll slow down or get injured if we haven’t seen it? Remember, although Henry has seen a huge workload in the past two seasons, he’s only been the clear-cut workhorse in the offense for just those two seasons. He entered the league at the same time as Ezekiel Elliott, yet has 396 fewer career touches (about a whole season’s worth). It’s not quite time for him to be run into the ground. Also, he’s 6-3, 247 pounds. That kind of size can take more of a pounding.

With McCaffrey’s injury concern and size (5-11, 205 pounds), he might not see quite as much work as his unbelievable 2019. Henry’s workload has zero doubts. There’s not a scenario in which another Titans RB will eat into any significant amount of carries. Can we confidently say the same about McCaffrey coming off an injury-plagued season? In PPR, McCaffrey takes the crown. For our money, roll with King Henry in standard.

Are any other RBs worthy of the No. 1 overall pick?

Cook is certainly a consideration for the No. 1 pick, but his inability to stay on the field has kept him out of the No. 1 spot in the past. Over the course of his four-year career, he’s missed 21 of 64 possible games. To be fair, he’s missed just four games total the past two years, but between the injury worries and the relatively mediocre receiving totals (44 catches last year), it’s tough to smash the draft button on him at No. 1 over guys like Henry, McCaffrey, or even Alvin Kamara in PPR.

There will be a ton of change in the New Orleans offense in 2021. With Michael Thomas out indefinitely with an ankle injury (in addition to publicly feuding with the team), Kamara could reasonably lead the Saints in receptions and receiving yards. He could also join the 1,000/1,000 club with rushing and receiving. Or, the Saints’ offense could stink. Yes, he’s set to be even more of a focal point this season, but if the offense is stagnant, his fantasy production could be, too. A bad offense means fewer scoring opportunities and more loaded boxes. In PPR, he rivals McCaffrey for No. 1 pick consideration after catching at least 81 passes in all four seasons, but with his overall efficiency in question, be wary of him going in the top spot.