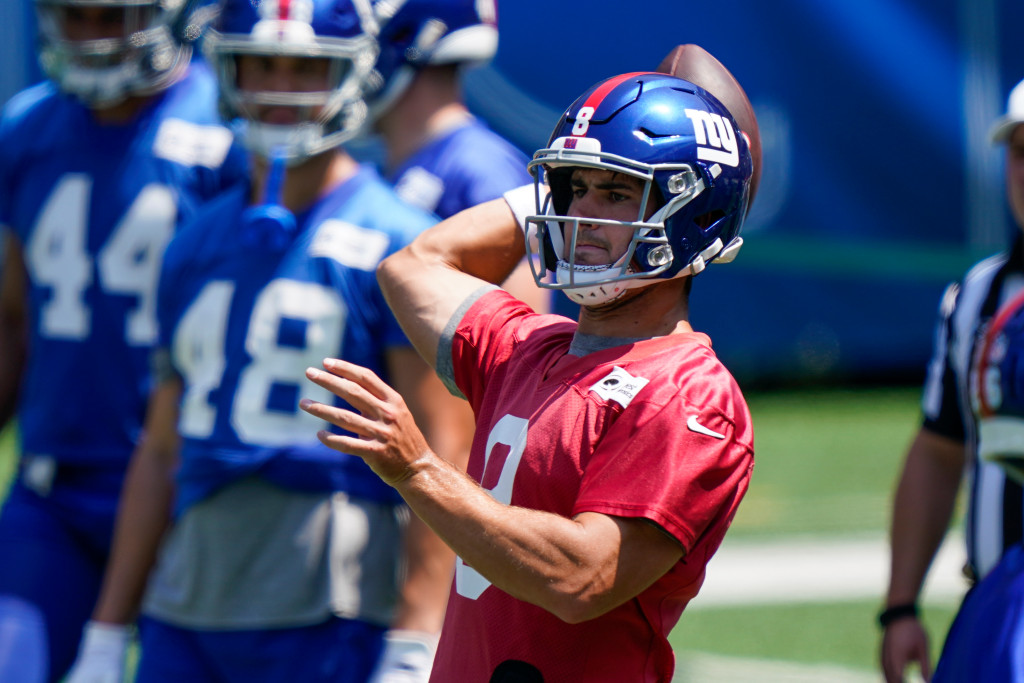 For the first time in his career, Daniel Jones will be a healthy scratch from an NFL game.

Jones won’t play for the Giants in Saturday’s preseason opener against the Jets as coach Joe Judge tries to protect the third-year quarterback from unnecessary injury risk. Veteran Mike Glennon and developmental third-stringer Clayton Thorson will be under center.

“That’s really not up to me,” Jones said when asked how much game action he needs to get tuned up for Week 1. “My job is to be ready.”

With one fewer preseason game on the schedule this year, every NFL coach is taking a different approach. The Chargers won’t play second-year quarterback Justin Herbert in any preseason games. The Jets will play rookie Zach Wilson for at least the first quarter against the Giants. Some teams will sit the starter this week and play him on a limited basis down the road.

Jones, who has missed four career regular-season starts due to injury, played all four preseason games in 2019 when he was still the rookie backup to Eli Manning. All 2020 preseason games were canceled because of COVID-19. Jones’ status for Aug. 21 against the Browns is unknown, but it sounds as if he will play Aug. 29 against the Patriots.

“Right now our plan is to treat that as a traditional Game 3 where we play [starters] maybe more of a full half,” Judge said. “At that point, the units have kind of established themselves. Nothing will be final, but it will be an opportunity to go, ‘Hey, get those guys together for an extended period of time.’”

Games offer a different look than practice, where defenses get familiar with plays and use tendencies to be disruptive. A fan-filmed video of Jones throwing right to the defense went social media viral Thursday because the offensive line missed a block, the receiver cut off his route and an easy interception was dropped.

“I think there are certain situations that maybe we treat a little differently, and you’re always learning in practice. That’s the most important thing,” Jones said. “You certainly want to treat it like a game and get in the habit of reading defenses and putting the ball where it needs to be.”

It appears the starting offensive line — Andrew Thomas, Kenny Wiggins (filling in for the injured Shane Lemieux), Nick Gates, Will Hernandez and Matt Peart — will play, though Judge was noncommittal. Considering Wiggins is the only one older than 25 years old, Hernandez is new to the right side and Peart is a first-year full-time starter, additional experience should be beneficial.

“We’ve got to keep pushing them forward,” Judge said. “In terms of when we get closer to the season, there is going to be a lot of things between now and then that change.”

If Judge is hinting at reinforcements on the way, it shouldn’t be a surprise given that two projected veteran backups — Zach Fulton and Joe Looney — retired and another, Jonotthan Harrison, is sidelined by injury.

Leonard Williams, who played 4 1/2 seasons in front of Jets fans and four pre-pandemic games in front of Giants fans, took the diplomatic route when asked to compare the crowds at MetLife Stadium. Saturday is a Giants home game.

“I’m sure every fan base is different,” he said. “Honestly, sometimes when I get into my flow out there, I don’t really hear the crowd, so it’s hard to pay attention.”