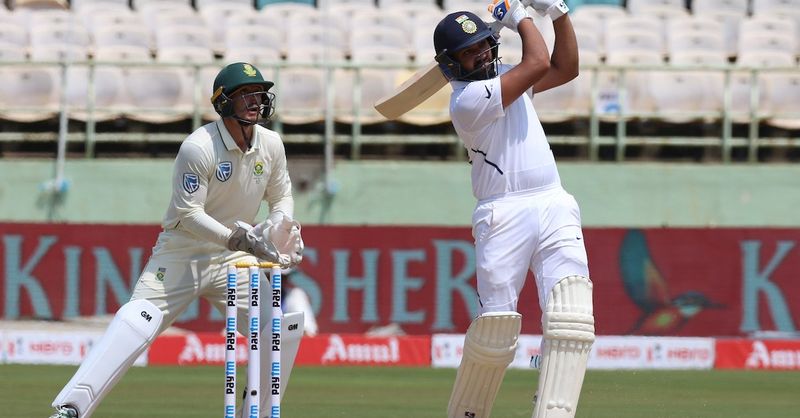 Rohit Sharma has reckoned that his knock of 83 against England at Lord’s was the most challenging innings he has played in the longest format. The 34-year-old, along with centurion KL Rahul, built a gritty opening partnership of 126 runs in the first innings of the second Test against England.

Indian opener Rohit Sharma has been a batting giant in ODIs and T20Is. The Indian opener has always gone under pump for his performances in Test cricket as he failed many a time to score runs while playing red ball cricket. When it comes to overseas conditions, Rohit always found it difficult to get big runs under his belt. This is clearly visible in his numbers as Rohit’s Test average drops from 79.52 runs at home to a sub par 29.08 in away conditions. His highest score overseas was 79 against Sri Lanka in Colombo until he bettered in with his 83 runs in the first innings of the second Test at Lord’s.

The Mumbai Indians skipper scored 83 runs with 11 boundaries and a six by adopting a calm approach, curbing his natural attacking game. The opener was dismissed by James Anderson on 83 to miss his first century overseas. The 34-year-old believes that his knock yesterday was the most challenging innings of his overseas career.

“I wouldn’t say the best because as long as you are playing. There will be a lot of opportunities that you will be having. But yes certainly challenging, the most challenging innings I have played. I felt very good, I was happy with the way we started off. Unfortunate dismissal but I couldn’t have done anything to that,” said Rohit, reported TOI.

The Nagpur born cricketer explained his restrained approach by stating that overseas conditions have to be respected. He went on to add that the Men in Blue know their exact role in the lineup since the Australia tour and it has led to the side performing well with the willow. That, however, did not stop the Indian star from punishing bad balls which was evident when he hit Sam Curran for four boundaries in a single over.

“That’s the challenge of Test cricket, you may have lots of shots in your book but when the conditions are against you, you have to keep talking to yourself and cut down unnecessary shots especially with the new ball,” Rohit explained.

Rohit Sharma along with KL Rahul, who scored an unbeaten century in the first Innings, put up a 126 run partnership for the first wicket at Lord’s. Even though England claimed three wickets by stumps on Day 1, India ended up with 276 runs on the board to take charge of the second Test of the five match series.