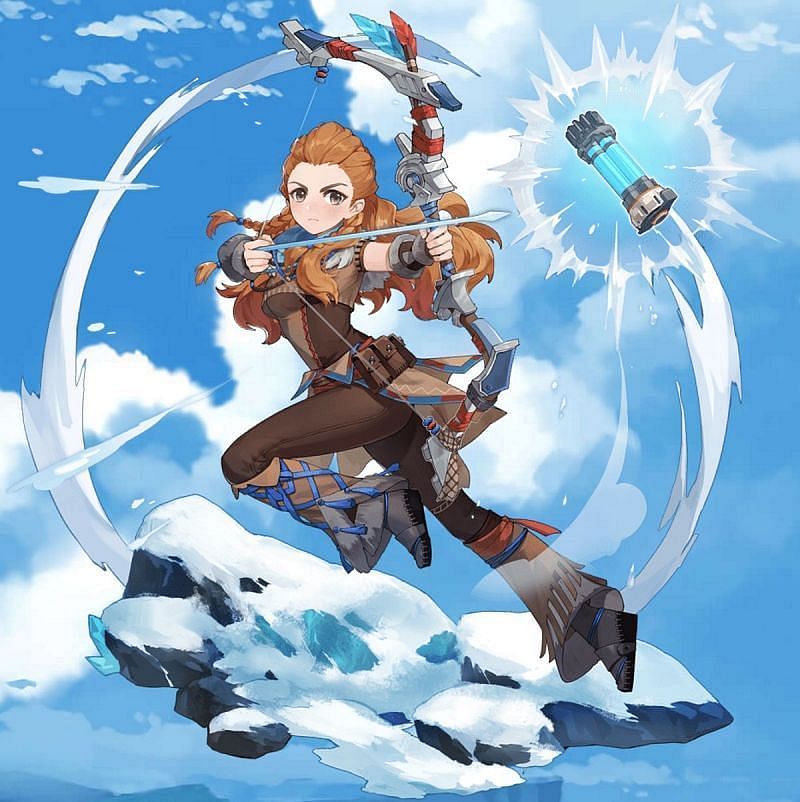 Aloy is a free 5-star Cryo Bow user that many Genshin Impact fans are looking forward to; fortunately, the leaks provide some interesting details about her.

Genshin Impact players will be able to get their free copy of Aloy if they’re Adventure Rank 20+. It’s that simple. Hence, it’s far more useful to know what her skillset is and what she does, given that the vast majority of the playerbase will have access to her.

She has an interesting kit for a 5-star freebie, especially for somebody who isn’t native to Genshin Impact. She’s originally the main protagonist from the Horizon Zero Dawn series, which also makes her the first playable crossover character in Genshin Impact.

Everything known about Aloy via Genshin Impact leaks

Since Aloy is a free unit and does not show up in any banner, she lacks a Constellation. Hence, Genshin Impact players don’t have to worry about acquiring multiple copies to use her at her maximum effectiveness. There is no way to increase her Constellation level like there is with the Traveler, either.

Still, Aloy has all of the other skills and ascension materials that some Genshin Impact fans should be familiar with.

Aloy is the first Genshin Impact character to have two completely different release dates based on the platform the player is playing on. For PlayStation users, she will be released in Genshin Impact 2.1 on 1 September 2021.

Aloy’s regular attacks are nothing special for a bow user. However, her Elemental Skill is interesting. She throws a Freeze Bomb, which eventually explodes into several Chillwater Bomblets. These smaller bombs explode on contact, which deals Cryo AOE DMG.

Whenever a Freeze Bomb or Chillwater Bomblet hits an opponent, their ATK will decrease and Aloy gains a Coil stack (which can happen every 0.1 seconds). Every Coil stack increases Aloy’s Normal Attack DMG, and when she gets four of them, she gains the Rushing Ice buff.

The ATK decrease lasts for six seconds, and the skill’s cooldown is 20 seconds. Rushing Ice lasts for 10 seconds.

Aloy’s Elemental Burst is incredibly simplistic, according to the Genshin Impact leaks. It’s essentially just Cryo DMG over a wide area. It has an impressive range and a low Energy Cost of 40. The cooldown is also only 12 seconds.

There is no gimmick associated with this Elemental Burst, which makes it one of the simplest in the game.

Aloy’s first Passive Talent makes it so that animals won’t be scared when the player approaches them (so long as Aloy is in the party). This applies to all animals who drop Fowl, Raw Meat, or Chilled Meat.

Her second Passive Talent makes it so her ATK is increased by 16% when she receives the Coil buff, and nearby allies get 8% extra ATK. The buff lasts for 10 seconds.

Aloy’s final Passive Talent increases her Cryo DMG bonus by 3.5% every second whilst she is in the Rushing Ice state. The maximum bonus achieved by this effect is 35%.

In total, a player needs the following to max out a single Talent:

The ? item is a new Ascension Material. It resembles a red flower of some kind, with a hint of pyro on it. It is currently unavailable for collection in Genshin Impact.

In total, the player needs the following to max out her level: