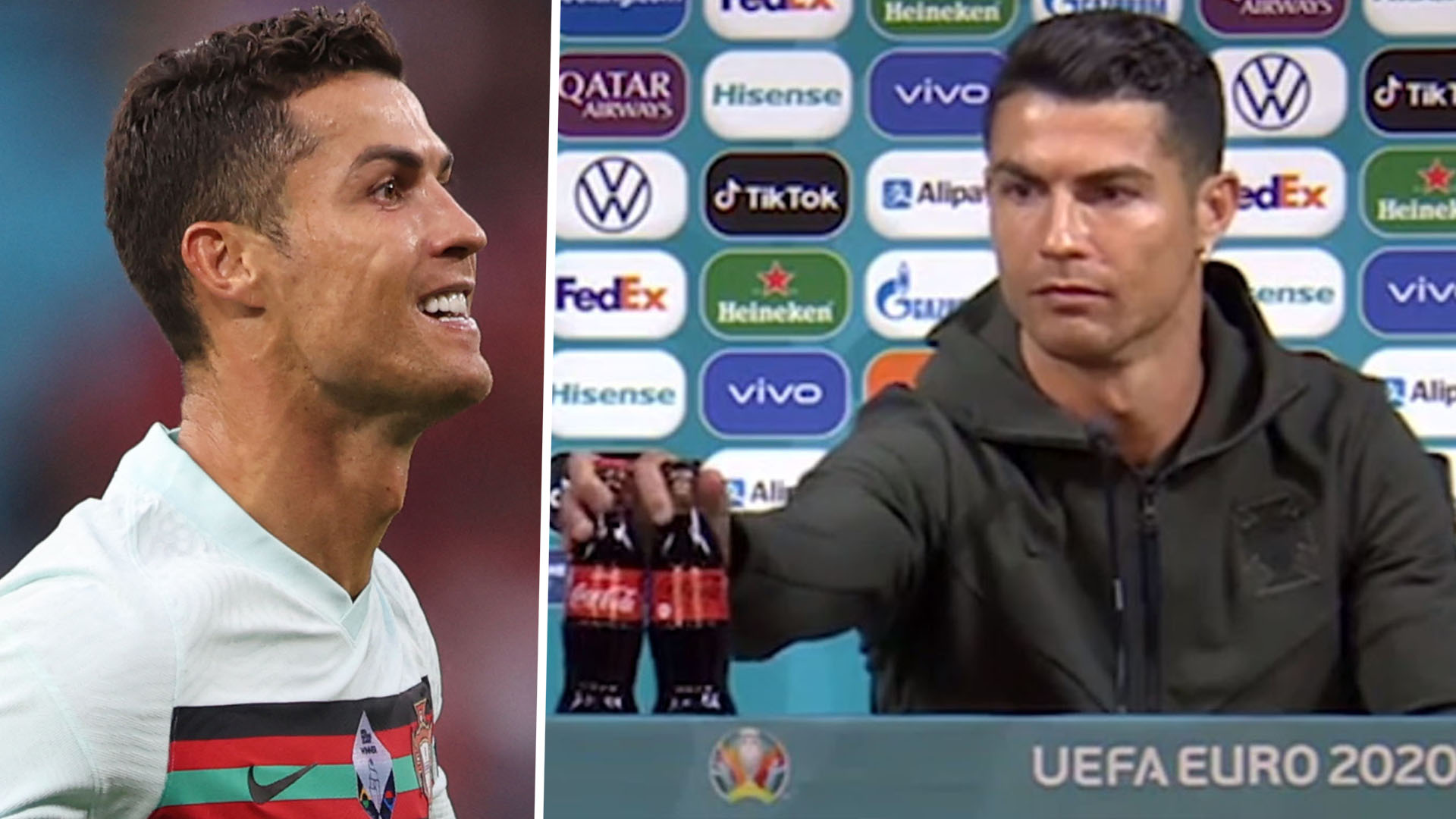 Cristiano Ronaldo’s disdain for Coca-Cola has been one of the major talking points of the European Championship, but why did his actions cause so much controversy? Goal is here to tell you everything you need to know about the incident.

Ronaldo has once again been one of the star attractions at the Euros, scoring three goals in Portugal’s first two group matches to put them within sight of a place in the round of 16.

However, the Juventus superstar’s exploits on the pitch have been overshadowed by a now-infamous show of contempt towards one of the world’s most popular brands in front of the media.

What did Cristiano Ronaldo do?

Ronaldo sat down for his first pre-match press conference of the tournament last Monday before Portugal’s clash with Hungary, and noticed that two bottles of Coca-Cola were sitting directly in front of him.

The 36-year-old promptly removed the soft drinks from the view of the cameras and replaced them with a water bottle, rolling his eyes while muttering with an undertone of disgust “Coca-Cola”.

Ronaldo held up his water bottle before setting it down and said ‘Agua’ – the Portuguese term for water – in an apparent attempt to urge people to drink water instead of Coca-Cola.

What other players have moved bottles at Euro 2020?

Manuel Locatelli took the same stance as Ronaldo prior to Italy’s 3-0 victory against Switzerland in their second Group A fixture last Wednesday, smiling broadly while placing a water bottle at centre stage instead of the customary two Coca-Cola bottles.

France midfielder Paul Pogba, meanwhile, appeared to take aim at another of Euro 2020’s main sponsors when he removed a Heineken bottle from his view at a media event.

The Manchester United ace is known to be a devout Muslim and, therefore, does not drink any alcohol, but was apparently unaware that it was the brewing company’s 0.0 per cent version.

Other players have tried to make light of the situation, including Ukraine’s Andriy Yarmolenko, who made sure that both the Coca-Cola and Heineken bottles were in front of him after a win against North Macedonia and jokingly asked the brands to contact him.

Belgium striker Romelu Lukaku followed Yarmolenko’s lead after winning the man of the match award in his country’s 2-1 triumph against Denmark, asking Coca-Cola to contact Roc Nation – the agency that handles his image rights.

How did Coca-Cola react to Ronaldo?

Coca-Cola’s market value plummeted by £2.8 billion after Ronaldo’s antics, but the company has since released a statement insisting that “everyone is entitled to their drink preferences”.

How have other brands reacted?

Elsewhere, one of Europe’s leading furniture retail companies, IKEA, has attempted to profit from the situation by releasing a new reusable water bottle under the name ‘Cristiano’.

Major water brands have also jumped on the bandwagon, including Evian, who shared the video of Ronaldo removing the Coca-Cola bottles via Twitter with the caption: “Couldn’t have said it better ourselves! #stayhydrated #drinktrue #CR7”.

Even the World Health Organisation (WHO) seized an opportunity for self-promotion, posting a link on social media to one of their articles highlighting the potential health benefits of cutting out sugar from your diet.