YouTube star Rashed Saif Belhasa, popularly known as Money Kicks, uploaded a video to his YouTube channel where he can be seen using UFC champion Francis Ngannou as a punching bag.

The Emirati influencer hit Ngannou with multiple body shots. However, they did not appear to have any effect on ‘The Predator’, who was comfortably drinking coffee while absorbing the blows:

“Oh my god, this guy doesn’t feel anything,” Rashed Saif Belhasa said in the video.

You can watch the humorous clip below:

In the full video uploaded to the YouTube channel Money Kicks, Ngannou spoke about his motivation to compete at the highest level of mixed martial arts:

“My motivation was the dream, my motivation to [do] combat sport was to make a point and prove that I am not less than others because I came from a different background, from a poor family. I deserve a right to dream and I can chase my dream.”

You can the the full interaction in the video below: 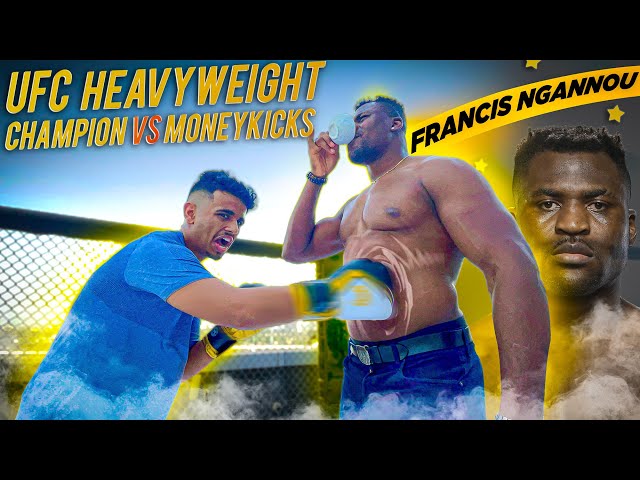 Money Kicks is a Dubai-based YouTube personality who currently has north of three million subscribers on YouTube. The 19-year-old YouTuber is set to participate in the UAE’s first influencer combat event called ‘Social Knockout’.

‘Social Knockout’ will be headlined by a bout between Belhasa and Anas Elshayib. The event will take place on July 30 at the Coca-Cola Arena in Dubai.

There is hardly any fighter in the UFC who possesses more devastating power in their hands than the current UFC champion Francis Ngannou. The most recent display of the 34-year-old’s Herculian strength came at UFC 260 when he knocked out Stipe Miocic in the second round. By doing so, Ngannou also achieved his dream of becoming a UFC champion.