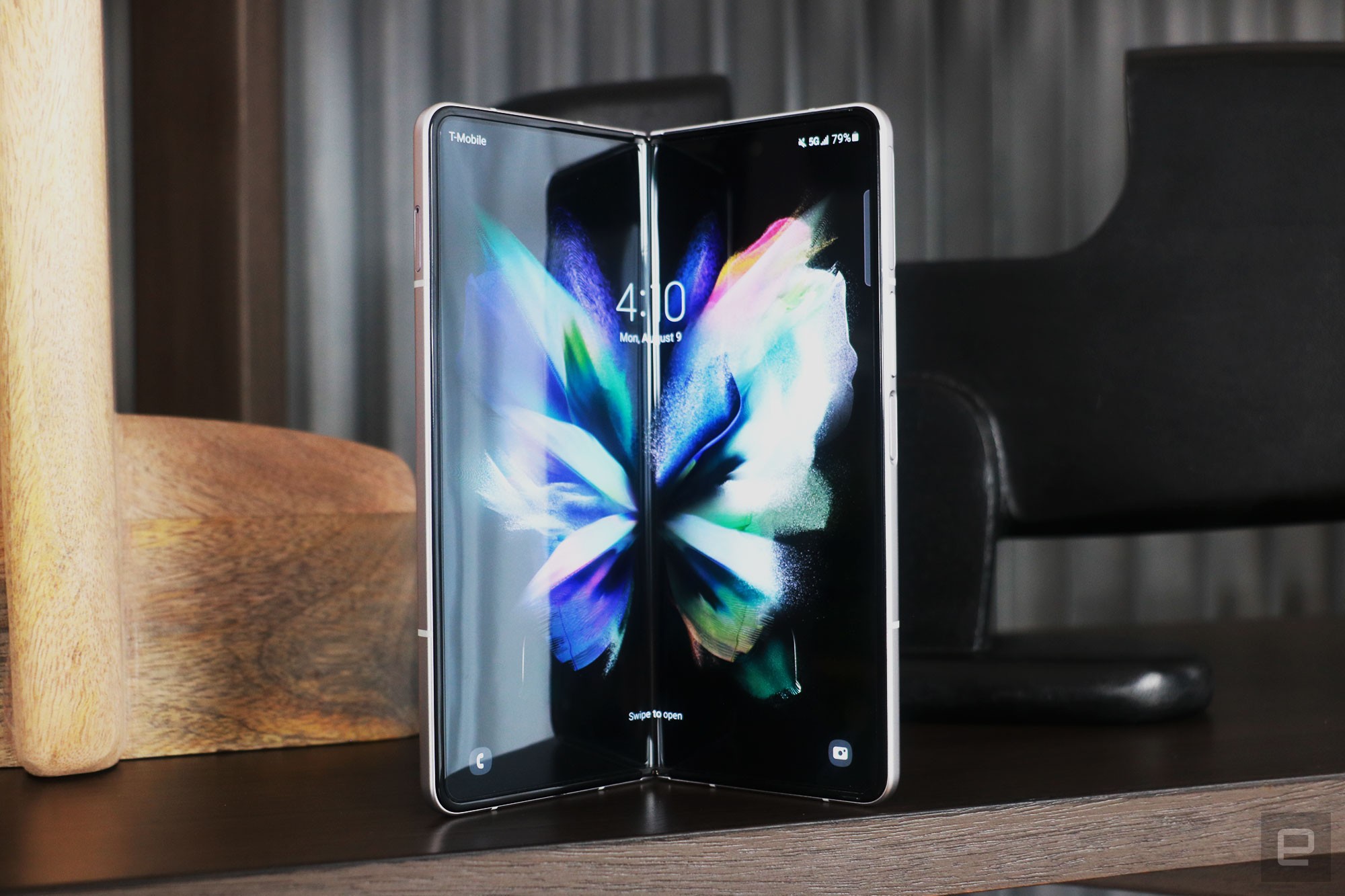 It’s hard to believe that in just a matter of years, foldable devices have gone from the stuff of science fiction to actual usable daily drivers. Here we are today, checking out the third generation of Samsung’s foldables, which the company just launched at its Unpacked event. The Fold 3 is the bigger, more premium of the new pair of bendy offerings, and the Fold series has been around longer than any other folding phone. Since launching the original, Samsung has worked to improve durability and software, which continue to be the two biggest challenges for foldables.

The Z Fold 3 is also the first of its kind to support Samsung’s S Pen, meaning you can write or draw on the larger canvas without breaking the screen.

In addition to stylus support, the Z Fold 3 features water resistance, a new under display camera in the larger screen and a stronger build that Samsung says brings an 80-percent increase in durability. Best of all, it starts at a cheaper $1,800. At a socially distanced preview event in New York, I was able to check out the Z Fold 3 and am so far pleased with what I’ve seen.

Given my limited time with the device, I focused on checking out things that are new, starting with the $50 S Pen Fold Edition and $100 S Pen Pro. For these versions, Samsung made the nib rounder than on older styli, so they’re less likely to tear into the screen. If you apply too much force with the pen, its nib will retract. For those who are concerned that the nib might be too sensitive and slide back into its housing at the slightest touch, I can say that it took a fair amount of effort for that to happen during my hands-on.

Though the 1.5mm nib is rounder and more than twice as thick as older S Pens, I didn’t find it too large and it was still very precise. I was able to draw fine lines and sketch thicker ones by applying more force, thanks to the 4,096 levels of pressure sensitivity.

Samsung said the durability and latency on this screen are better than any other pen-compatible device it offers, and while I can’t make a direct comparison yet, the stylus did feel responsive and fluid in my brief preview. You can spend a little more to get the S Pen Pro, which also works with the Fold 3. It’s bigger, longer and supports Bluetooth for remote controls. Unlike the Fold Edition, the Pro model needs power and has a USB-C slot at the top for charging.

You can only use either S Pen on the internal screen, by the way — the cover display does not support pen input. There’s also no slot for the stylus so you’ll have to find a way to make sure you don’t misplace it.

Multitasking software and under display camera

With the unfolded display, you can use multiple apps at once. The 22.5:18 aspect ratio is uncommon, which is why on previous Folds, many apps like Instagram and Netflix didn’t completely fill the screen and were awkwardly flanked by empty space.

Samsung has worked on a few experimental features to make Android apps work better on the roomier canvas. Under Labs in settings, you’ll find options to choose 16:9, 4:3 or fullscreen as the default aspect ratios that apps launch in. You can also enable Multi Window for all apps, which allows them to open in floating panels or split screen, even if they weren’t designed for those layouts. There are also options to auto rotate apps and use a Flex mode panel that makes better use of the screen space when the system detects that the Fold is half-open.

At my demo session, I launched the Camera app on the Fold 3 and it expanded to take up the whole screen when I opened the device all the way till the hinge clicked in place. When I folded it slightly, the app split in half, with thumbnails of photos in my camera roll on the left side and the viewfinder and controls on the right. As I snapped more pictures, they quickly showed up on the carousel on the left. I was impressed with how responsive the system was — the app switched between Flex and fullscreen modes with no delay.

There aren’t many apps that support Flex Mode at the moment, but Samsung said it’s working with developers to encourage adoption. One more thing the company did to make multitasking on the Fold 3 easier is add an option to pin the Edge panel on the side to get a taskbar-like experience a la Windows or Chrome. I can’t vouch for how useful this will be in the real world yet but I like the idea in theory.

To make the larger screen feel more immersive, Samsung used a new Under Display Camera (UDC) on the Fold 3 that camouflages the 4-megapixel sensor under some pixels. At least, that’s the theory. I was confused at first when I looked at the Fold 3’s main screen with a dark wallpaper and could clearly see the camera. Then I opened Google Maps and the small dark circle that’s the sensor disappeared under the blues and greens of the world. Well, sort of. There was still a ring of pixelation, but it was only obvious because I was looking for it.

The distortion is there because that part of the display has spaces between its pixels to let light through to the sensor underneath. It was noticeable in Maps, but less so in Chrome, where the top row of the screen was more evenly colored. I didn’t find it too distracting when I jumped between apps or browsed the Stock Market Pioneer website, and I wouldn’t be surprised if I got used to it over time.

The sample photos I got with the UDC were decent, although I’d still prefer using the main sensors on the other side of the Fold 3 for selfies or landscapes. This under-screen option is mostly there for video calls.

Software and a UDC aren’t the only improvements to the Fold 3’s screens. Both the 7.6-inch interior display and the 6.2-inch external one now support adaptive 120Hz refresh rates. For the cover screen, that’s twice what it was before. The front panel is still somewhat low-res at 2,268 x 832, while the bigger one inside is 2,208 x 1,768. At least they’re both AMOLEDs. That means colors look richer, blacks are deeper and contrast ratios are higher than on LCD smartphones.

To support the S Pen, Samsung also redid the Fold 3’s display stack and added a Wacom layer. While it did that, it also used a new stretchable PET5 (Polyethylene terephthalate) material in the Fold 3’s factory-installed screen protector. Compared to its previous foldables, Samsung claims this screen is 80 percent more durable.

The Fold 3 also features a stronger build than previous versions, and for the first time since Samsung started selling foldables, this year’s Z-series phones are rated IPX8 for water resistance. I didn’t get to test this at our demo, but I appreciate the peace of mind that will give me when I inevitably get caught in the rain or accidentally spill water all over a review unit.

The company also used something it calls “Armor Aluminum” in the Fold 3’s frame and hinge. That’s “the strongest aluminum ever used on a Galaxy smartphone,” Samsung said. It also covered the Fold 3 in Gorilla Glass Victus, which it said is 50 percent hardier than what it used on its older devices. Again, I didn’t want to drop or scratch the demo unit under the watchful eyes of Samsung reps at my preview, so I can’t say how well these will withstand the bumps of daily life yet. But the hinge did feel sturdy as I opened and shut the device repeatedly. Plus, as I pushed my thumb into the middle of the edge to close the Fold 3, I didn’t feel like I was going to damage it.

Although it made the device more durable, Samsung was still able to shave off a few grams and millimeters. The Fold 3 weighs 271 grams (0.6 pounds) and measures 6.4mm (0.25 inches) thick, which is thinner and lighter than the Z Fold 2 (282 grams, 6.9mm). These are subtle enough differences that the new Fold doesn’t feel much smaller than its predecessor, but even an 11-gram weight loss can make it easier to use the device for longer.

A more noticeable change is the new slate of colors. The Fold 3 is available in silver, green or black, and my favorite of these is the green. It’s a muted forest green, unlike the pastel hue on the iPhone 12 or the understated jade of the Pixel 5. Compared to these shades, the Fold 3’s looked the classiest.

Three generations in, Samsung has clearly learned a lot and the Z Fold 3, at least based on this preview, feels very refined. Plus, its lower starting price of $1,800 is more palatable than the Fold 2’s $2,000. But does that mean Samsung has perfected its foldable formula, and is the Fold 3 ready for the average consumer? Even at its new price, it’s probably still too expensive for most people. For early adopters curious about things like battery life and camera performance, I can’t gauge these till I can test the Fold 3 out in the real world. But for the first time since the original Fold, I can see a future where foldable phones will be embraced by a mainstream audience.

Follow all of the news from Samsung’s Galaxy Unpacked event right here!