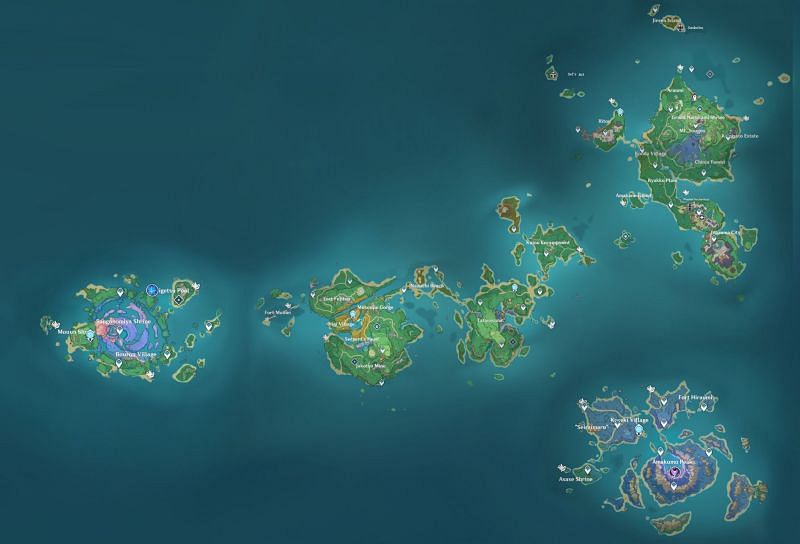 According to leaks, two new Inazuma islands are coming to Genshin Impact in version 2.1.

Genshin Impact initially released three areas in Inazuma in version 2.0, and will likely add Watatsumi Island and Seirai Island in 2.1. It’s safe to assume the Inazuma storyline will continue with events on these two islands.

Now, because of the leakers, players may have a little more insight into these new regions. The full 2.1 Inazuma map has been revealed, with Watatsumi and Seirai Island included.

Thanks to leakers, Watatsumi and Seirai Island are now mapped out and located in Inazuma. If the leaked map is accurate, Watatsumi Island will be found to the west of Yashiori Island. Meanwhile, Genshin Impact players may find Seirai Island south of Narukami Island and Kannazuka.

Both new islands are about the same size as the current Inazuma regions on the leaked map. Watatsumi and Seirai are, however, much more water-dominated.

The leaked Watatsumi map shows pink and purple terrain in a spiral pattern over the inner sea. It’s worth speculating that the official concept art shown above might be a hint into what this area looks like up-close.

At the center of Watatsumi, Genshin Impact players will find the Sangonomiya Shrine, which will surely be an important place in Inazuma. In this purple area, the shrine will be surrounded by mountains and waterfalls.

Watatsumi and the Raiden Shogun are constantly at odds, and the Traveler will certainly become more involved in this conflict. The Traveler has recently joined Kokomi’s resistance, based at the Sangonomiya Shrine, meaning the island may be crucial to the overarching story of Inazuma.

As players traverse Watatsumi island, they will be surrounded by an abundance of distinctly-colored plantlife. Based on what’s been revealed, Watatsumi may have a stunning and unique design.

Now, it’s only a matter of time until this island is open for exploration.

Seirai is known for having suffered a disaster, which now causes a consistent thunderstorm in the island’s center. Because of this, it’s safe to say the storm surrounds the large island on the leaked Seirai map.

Seem like 2.1 will have Seirai Island too.
Found it on some Russian Telegram Channel (Russian dataminers let’s go!). pic.twitter.com/I3Itu0U0lI

The thunderstorm will surely be an obstacle to exploration in Seirai Island. An image of the storm was also leaked in the Wangsheng funeral Parlor Discord. However, it’s unclear whether this is from a future cut-scene or a screenshot from the player’s perspective.

If the leaks are accurate, Genshin Impact players will have plenty of content to experience on Watatsumi and Seirai Island. Version 2.1 will be released at the start of September, so players won’t have to wait much longer for new chests, quests, and added features.