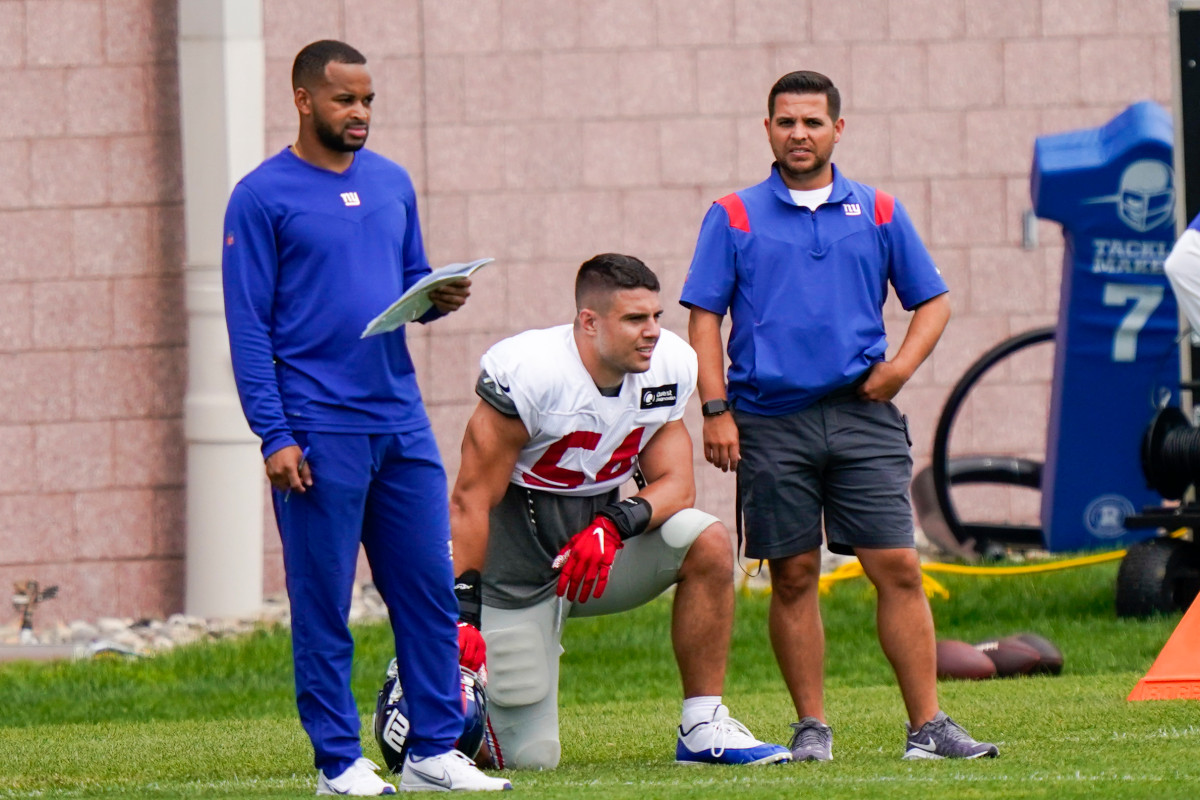 Blake Martinez isn’t certain who will be starting alongside him at inside linebacker in the Giants’ 3-4 scheme this season, but the key 2020 free-agent signing enters his second season in New York as one of the most trusted mainstays returning to the team’s defense.

Martinez, who opened camp on the COVID-19 injured list before returning to practice last weekend, started all 16 games last season and finished third in the NFL with 151 tackles, including 86 solo stops after signing a three-year deal worth $30.7 million.

With the addition of Martinez and others, the Giants improved from 25th in the NFL in yards allowed in 2019 to 12th last season under defensive coordinator Patrick Graham, and from 30th to ninth in points allowed at 22.3 per game.

“Obviously last year was last year, and this is a new year, new group, new guys, kind of a new chemistry and things like that,” Martinez said before the Giants practiced in front of fans Wednesday night at MetLife Stadium. “Overall, I can just speak for this training camp and what I’ve been a part of throughout these practices.

“This group has a lot of potential, but it’s all about putting that work in every single day, working together, becoming a full unit, all working in unison, making all the checks and being in position to make the plays.”

The Giants released their most recent depth chart Wednesday, and it listed second-year linebacker Tae Crowder as the other starter on the inside with Devante Downs behind him. Five-year veteran Reggie Ragland, signed as a free agent from the Lions, is listed behind Martinez.

“That’s the thing, no matter what, I go out there every day and say, ‘I want to be the guy out there.’ It’s not, ‘I’m already the guy.’ So I think throughout the group we all have that same thought process and put in the work every single day to make each other better. It’s an iron sharpens iron type of thing,” Martinez said. “It’s going to make for an awesome training camp.

“Like I said, iron sharpens iron and I think each and every one of us, whoever ends up out there for Week 1 is going to be ready to go.”

Head coach Joe Judge also used the iron analogy this week when he said that he often has Martinez line up against rehabbing star running back Saquon Barkley in certain drills because he trusts the six-year veteran linebacker “can work with respect and what they’re going to do against each other” as Barkley attempts to get healthy and regain his pre-injury form.

“It’s just two guys that we trust that Saquon can execute the technique, build in his rehab, get in a football movement. And Blake can work what he’s going to do, and he also knows that he’s not going to do anything and make a mistake that maybe someone else would make,” Judge said. “I’m not accusing any one of our players, but sometimes you may get someone who’s maybe a little outside their lane and we want to make sure we keep them safe.”

The 27-year-old Martinez said that he “for sure” views the Barkley assignment as a sign of respect from the coaching staff, both for his ability and his team-first approach.

“It kind of goes back to the ‘iron sharpens iron’ type of thing, but also with Saquon coming back, with his injury, I think the coaches trust me and know we’re going to get the work in that’s needed,” Martinez said. “But no kind of funny business or anything out of control is going to happen during those drills.”