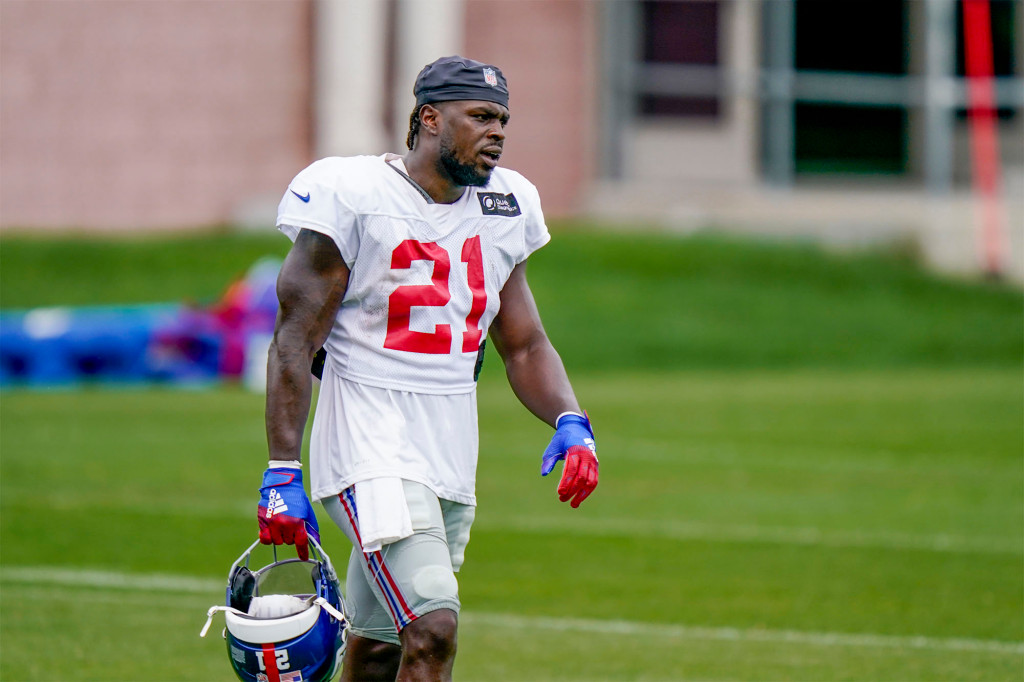 It would be a shame if the Giants cannot find a way to keep Jabrill Peppers.

There will be other marquee mouths to feed following this season for general manager Dave Gettleman and coach Joe Judge, not the least of whose belongs to Saquon Barkley, with Daniel Jones eying a pot of gold at the end of the Big Blue rainbow, and a squeezed salary cap dilemma in 2022 ($1,748,533 in space as of now).

Peppers will be playing on his fifth-year option this season and the safety room is crowded with Logan Ryan and 2020 second-rounder Xavier McKinney … and I say to hell with any numbers game.

Figure out a way to keep this guy.

How many boxes does a guy have to check?

Along with 2019 first-round DT Dexter Lawrence, Peppers has helped absolve Gettleman of blame at this juncture for the controversial Odell Beckham Jr. trade and the departure of Landon Collins.

Peppers is a pepper pot who has emerged as the emotional leader of Patrick Graham’s defense.

“It’s one of those things where I could be myself, show my emotion, and some guys tend to rally around it,” Peppers told The Post recently.

I asked Peppers if he picks his spots.

“It just kinda happens organically,” he began, “I don’t think like, ‘Oh, I gotta say this now.’ It’s just, if something happens, I feel it, I could say it. It’s not something I think about. Some guys have to choose their spot, and think about it, to me it just comes naturally.”

What would I hear from you on the field?

“It depends on the situation,” he said. “If we’re coming out hot and we’re making a lot of plays, you might hear something like, ‘Let’s keep it up, let’s keep up the intensity, we need more.’ [If] it’s just kinda sluggish … I might say, ‘Let’s pick it up, D. Come on, y’all.’ Try to make a play, get animated, try to bring the juice a little bit.”

For Big Blue, the juice is always worth the squeeze.

“Whether he’s tired, whether he’s having a bad day or not, he’s bringing guys up with him,” Leonard Williams said, “and that’s what makes him such a good leader. He’s not focused on just having a good day on his own, he’s focused on making sure other people are matching his energy and bringing the same intensity to practice every day.”

Peppers came out into an empty MetLife Stadium for practice on Thursday waving his arms as if to implore a packed house of Giants fans.

“He’s bouncing around, hopping around … we always say he’s on like energy drinks — Red Bulls, coffee, all type of stuff all day,” Williams said. “He just brings intensity, whether it’s just his body language or what he’s saying verbally. He just brings it. … Having him back there and feeling his presence at all times definitely gets guys going.”

Asked if Peppers is the most talkative Giant on defense, Adoree’ Jackson smiled and said: “I give him that award.”

Peppers was asked if he has been this way since his East Orange pee-wee days. “Absolutely,” he said. “Absolutely. Absolutely.”

“When I got here, I just wanted to make it my due diligence to make the coach look good, the GM look good because they believed in me,” Peppers said. “That’s been my mindset ever since.”

His contract situation isn’t at the forefront of his mind.

“I’m not really thinking about that,” Peppers reiterated. “I love being here, I’m a Jersey guy, I love this organization, they believed in me, and it’s been my due diligence to make them look good. All that contract stuff, I’m not really worried about. I’m worried about being the best player on the field, the best person off the field. If I do what I have to do, take care of everything on the field, everything else will take care of itself.”

Ask him why he loves being a Giant, and he tells you: “Just everything this organization embodies — the tradition, hard-nosed, hard-working, blue-collar bunch, and I just want to be a part of the tradition here, man. It’s been a lot of great players that came before me, and I’m just trying to make ’em proud and do my due diligence to make the whole New York-New Jersey proud.”