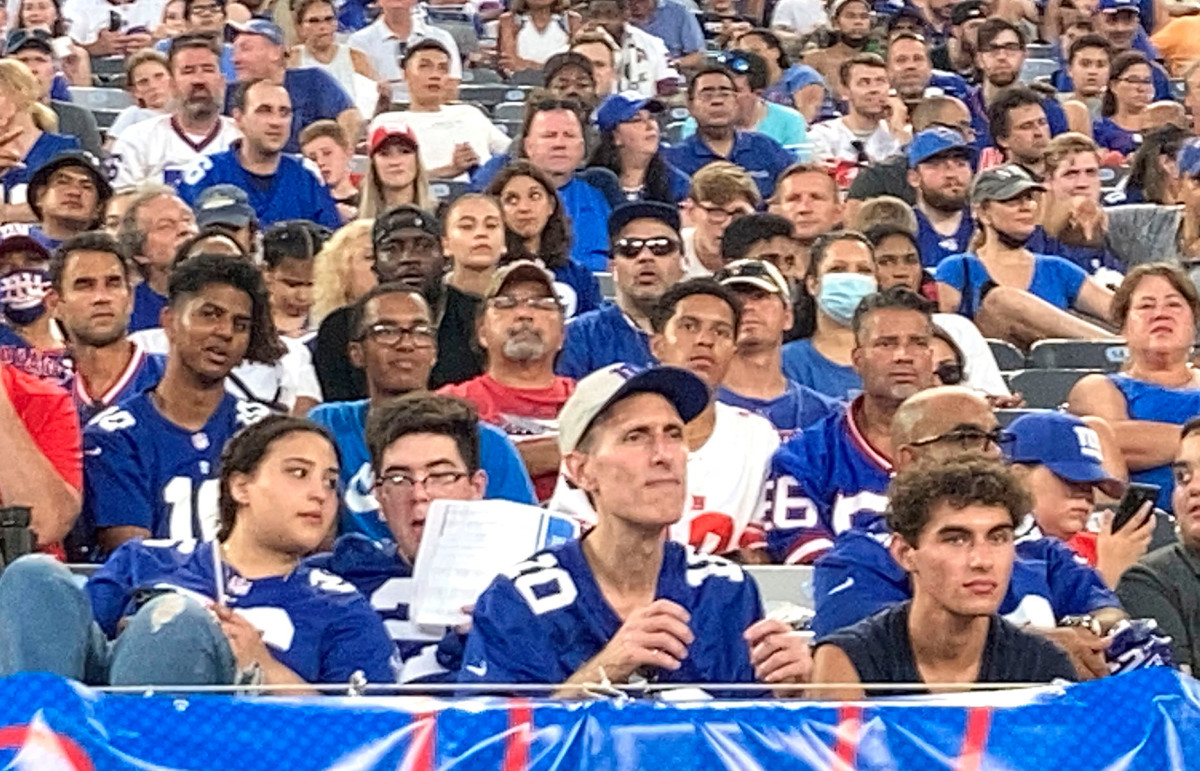 When it comes to the Giants, MetLife Stadium and the so-far unholy alliance that exists between team and home, the best part of Wednesday night’s Fan Fest event was that no one was keeping score.

It is better for the Giants that way.

The surest way to know Joe Judge is going to be a big success with the Giants is by what his team achieves when it plays directly in front of its fans. His debut season as head coach should come with readily attachable asterisks, especially suited for the 3-5 record Judge attained at MetLife. The global pandemic kept all 82,500 gray seats unoccupied all season and so there were no cheers, no boos, no Cowboys or Eagles supporters infiltrating the scene, no December no-shows alerting co-owner John Mara that the paying customers have gone from hopeful to disgusted to apathetic.

The Giants this summer kept their training camp closed. They should have worked harder — yes, even amid the ever-changing COVID-19 landscape — to put up a few bleachers to allow a few thousand fans to watch them work.

For this event, they gave out 50,000 free tickets. According to the Giants, just under 29,000 showed up for a two-hour practice — Judge wisely made sure this one was in full pads and not one of those scaled-down “Pro Bowl jog’’ sessions. There were autographs from Super Bowl heroes O.J. Anderson, Ahmad Bradshaw and Mario Manningham. There were parking lots with vehicles and footballs tossed around the blacktop through the humid air.

“That’s been circled on my calendar,’’ tight end Evan Engram said. “I do miss the fans at training camp every day like in the past. Just being back in the atmosphere and kind of getting a taste of what it’s going to be like come September 12.’’

On that day, the Giants open their regular season at MetLife Stadium against the Broncos, and if that is not a game to finally start establishing some home-field advantage, what is? In 11 seasons playing at MetLife, the Giants have a winning record in two of them: 2012 and 2016. They are 39-49 all-time in the regular season at MetLife — 9-23 in the past four years. Rather than being a kick-ass team at home, they are a kicked-ass team at home.

Judge embraces Giants history, but is not going to be saddled with this.

“In terms of anything that’s happened in the past, it’s not relevant to any game we’re gonna play this year,’’ Judge said.

Before this open practice, the last time the Giants took the field with their fans in attendance was 592 days ago. It was Dec. 29, 2019, and, naturally, they lost, turning someone named Boston Scott into a scoring machine in a 34-17 tank-job against the hated Eagles — Pat Shurmur’s final game as head coach.

No one loved the shiny newish building when it opened for the 2010 season. It sits off exit 19W on the New Jersey Turnpike — in the parking lot where old Giants Stadium once stood — as a sort of punch line, those massive silver Venetian blinds — the official designation is “louvers’’ — inspiring little in the way of grand design to excite the masses. Yet no one would have cared much about the lack of inspiring aesthetics if the product wasn’t so lousy.

Judge coached last season to an empty theater. It was all so disorienting. The home team ran through the tunnel, barged through the smoke, heard the blaring music and then — nothing.

“You kind of got numb to it after a while,’’ defensive lineman Dexter Lawrence said.

At least what transpired Wednesday night whetted appetites. Logan Ryan, a Jersey native, bounced onto the field and exhorted the crowd. Kenny Golladay played catch with fans in the stands. Lawrence tossed the ball to a fan wearing an Eagles jersey and then playfully motioned for that fan to leave. An “Eagles suck’’ chant ensured, on cue.

Daniel Jones got a nice ovation. Eli Manning, wearing sunglasses, golf shirt and khakis, got a bigger ovation. Leonard Williams, fooling around with the other defensive linemen, caught a pass in the corner of the end zone and then went Hulk Hogan to the fans, who loved it.

Judge had a fun competition scheduled to end the practice — offensive and defensive linemen fielding punts — but it was shelved because of lighting moving into the area. Players before exiting tossed T-shirts into the stands — Leonard Williams was particularly engaging with fans — and Judge, clearly energized, called the evening “unbelievable … outstanding.’’

After a one-year hiatus, the honor returns for real. To take the Giants seriously, they have to start turning their house into a home.