The 23-year-old Bellator lightweight prospect expressed his respect for the 32-year-old retired MMA megastar, who is his older cousin.

During an interview with MMA Fighting’s Mike Heck, Usman was asked about his opinion on Khabib as a coach. Usman praised the former 155-pound champ and explained why having ‘The Eagle’ in his corner has proven to be tremendously beneficial to him. Usman, via a translator, stated:

“Yeah, to be honest, Khabib is the best corner for me because I grew up with him. He saw how I grew up. I started training with him. He trained me from the beginning.”

He added that Khabib Nurmagomedov knows everything about him. Usman noted that his cousin knows when he gets tired, when he’s not going to get tired, what he can do, what he doesn’t know how to do, and so on and so forth. Usman credited Khabib for always giving him the best advice.

In response to being asked whether he feels Khabib Nurmagomedov is the Coach of the Year, the Moscow-based lightweight simply said, “Of course.” 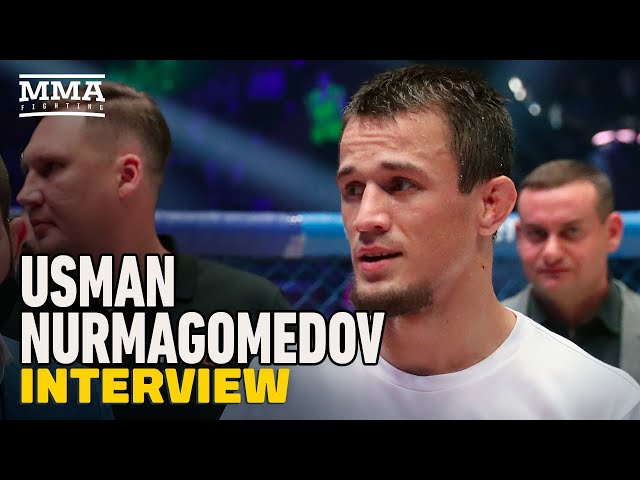 Abdulmanap passed away in July 2020 but left behind an indelible mark on the sport of MMA. The fighters he’s trained, including top-tier UFC stars such as Khabib and Islam Makhachev, have helped bring home several accolades to Dagestan.

Khabib Nurmagomedov retired from the sport of MMA after his win over Justin Gaethje in October 2020. Khabib revealed that his mother didn’t want him to continue his fighting career without his father by his side. As a result, Khabib competed one last time after his father’s passing before hanging up his gloves.

Meanwhile, Usman Nurmagomedov’s most recent fight was a unanimous decision win over Mike Hamel at Bellator 255 in April of this year.

Usman is scheduled to fight Manny Muro in a lightweight bout at Bellator 263 at The Forum in Inglewood, California later today.