Despite retiring from MMA in 2020, former UFC double champ Henry Cejudo remains vocal within the MMA community. ‘Triple C’ recently gave his thoughts on who will come out on top in the upcoming UFC 264 headlining trilogy fight between Conor McGregor and Dustin Poirier.

Both McGregor and Poirier have a win apiece. But it was ‘The Diamond’ who most recently came out on top, picking up a technical knockout victory over McGregor in January 2021. Cejudo does not believe the trilogy fight will be much different from the last.

In a recent interview on the Real Quick with Mike Swick podcast, Henry Cejudo was asked who he believes will come out on top in this much anticipated lightweight rubber match. Cejudo said:

Henry Cejudo believes Conor McGregor has nothing new to offer. According to him, ‘The Notorious’ has shown a broad range of personalities since joining the UFC; a brash, confrontational side, and other times a ‘nice’ attitude. However, Cejudo did acknowledge the Irishman’s past success.

“Conor McGregor showed his cards. Conor McGregor, him trying to pull that nice guy role. I mean it’s ok. I think that partially what made Conor McGregor so great is the fact that he could s*** talk and he could get into somebody’s mind and next thing you know he’s doing exactly what he would say,” said Henry Cejudo. 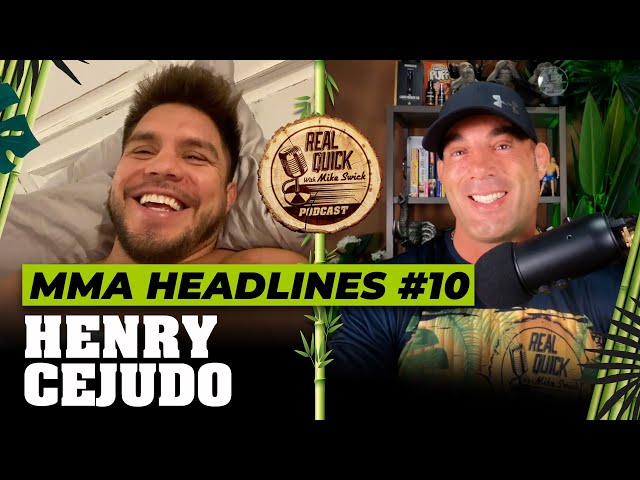 Similar to McGregor, Henry Cejudo was known for being incredibly outspoken in an attempt to get inside his opponents’ heads. The fact that McGregor has gone away from this kind of mental warfare appears to have made ‘Triple C’ lose faith in the Irishman.

Speaking about this change in McGregor’s attitude, Henry Cejudo said:

“But now, since he became this good guy, and now that people saw that the calf kick has been working, and they can see how effective it’s been. It’s not going to go good for Conor in my eyes. I think it’s going to go the same way. Poirier’s going to stop him again.”

Henry Cenjudo went on to reiterate that he sees Poirier as the clear favorite in this fight. Notably, he does not appear to take Poirier’s fighting ability into consideration, simply basing his pick off McGregor’s change in mentality.

“Poirier’s going to stop him again just because of those facts. He lost his groove, he lost his- his icebox got wet, you know what I’m saying. Like that Chris Brown song. It really did, man. Because that was part of the swagger, when you lose that, I mean you can come back to it but then it’s no the same to the other person. It’ll be the same to you, but it’s not gonna be the same to your opponent.”