Jose Aldo has explained why he believes Conor McGregor can return and win another UFC championship, despite his recent setbacks.

Ahead of his fight with Pedro Munhoz this weekend, the Brazilian explained his recent comments towards his former featherweight rival.

During UFC 265 media day, Aldo said he could never doubt an athlete that’s been as successful as Conor McGregor has. 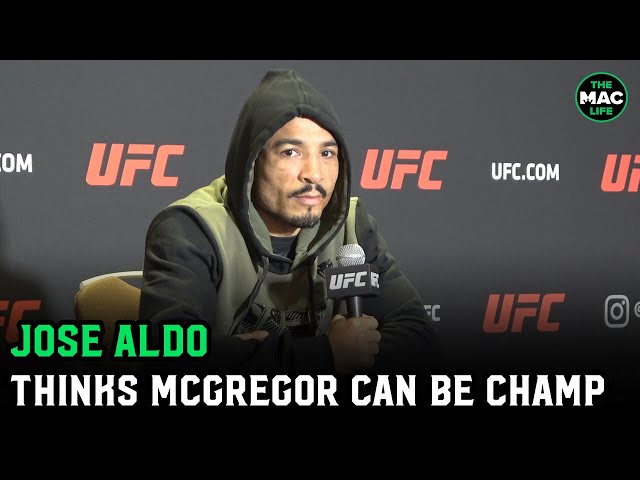 Aldo and McGregor have a history with each other in the UFC. The pair crossed paths at UFC 194 in one of the most highly anticipated title fights in UFC history. In just 13 seconds, the fight was over.

The Irishman caught Aldo with his infamous counter-left strike and knocked out ‘Junior’ in a brutal manner to win the UFC featherweight title.

But despite the previous bad blood between the two men, Aldo has clearly shown his respect towards McGregor, who also did the same immediately after their fight a few years ago.

Aldo is now focused on his career at bantamweight and will be fighting fellow Brazilian fighter Pedro Munhoz in the UFC 265 co-main event on August 7.

At the UFC 264 pay-per-view, Conor McGregor suffered a gruesome leg injury in his trilogy fight against Dustin Poirier.

The pair fought in an explosive third fight that saw McGregor even attempt a submission against ‘The Diamond’.

But eventually it was Poirier who secured the victory and got his hand raised for the second time against the former two-division champ.

McGregor is currently recovering from his broken leg and will hope to get back into the octagon at some point in 2022.