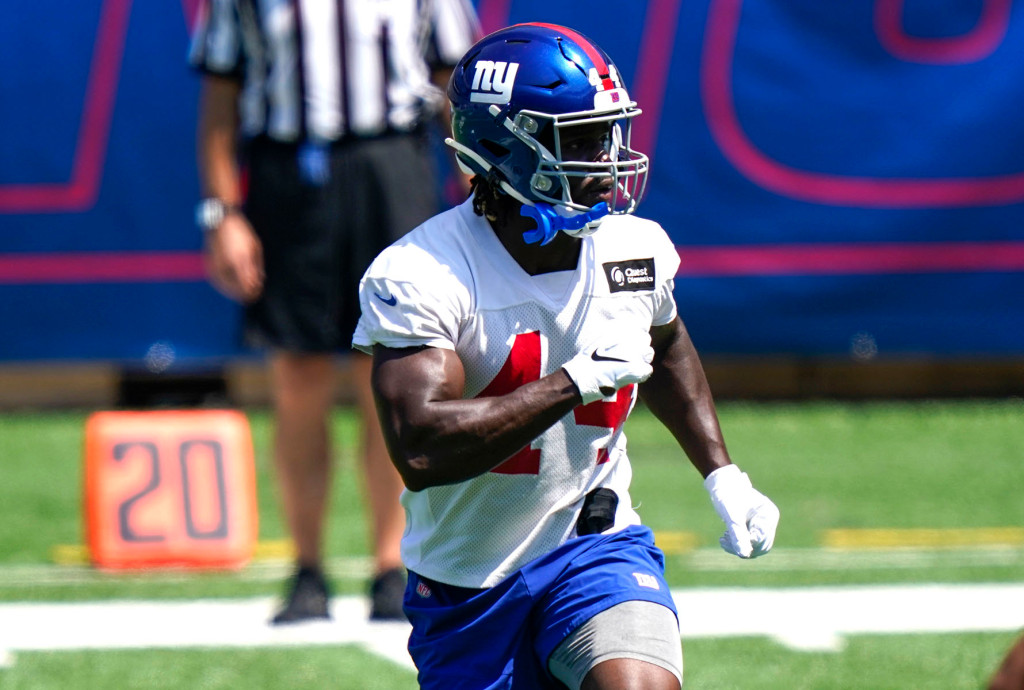 The emphasis his family’s Nigerian culture places on generation-to-generation storytelling matches up to a lasting piece of advice Ifeadi Odenigbo received in college.

So, the new Giants pass-rusher understands exactly how to see this next phase of his NFL career.

“I remember someone saying, ‘Think of your life as you are the narrator of your own story,’ ” Odenigbo said. “So, I just want to keep building. New beginnings, new team, new chapter.”

That’s not all that’s new to Odenigbo, who also is learning how to play as a stand-up outside linebacker in a 3-4 defense after success as a hand-in-the-dirt 4-3 defensive end with the Vikings. The biggest difference is in pass-coverage responsibilities against a tight end or running back.

“The type of coaching I’ve had is just like: How does the offensive tackle set? Is he an outside hand-puncher? Does he have inside hand placement?” Odenigbo said. “One thing I’m excited about in this defense is just learning the differences between man coverage and zone coverage, where my help is, when I can take a calculated risk.”

Just about the only thing familiar for Odenigbo is living in the shadow of New York. Or maybe it’s new again because, while he was born in Bayonne to a mother who worked in Jersey City, he was raised in Ohio.

“I’ve said I was the Prodigal Son,” Odenigbo said. “Little did I know it was 30 minutes from MetLife Stadium.”

Every so often, the 27-year-old Odenigbo looks at the names and tries to picture the faces in his recruiting class at Northwestern or his 2017 NFL Draft class. What does he notice? It’s time to become more versatile.

“It starts shrinking and shrinking — guys have gotten injured — and you get to the point where any day could be my last day,” Odenigbo said. “I talk to a couple guys in the league right now and we’re like, ‘What happened to this guy?’ It just brings to notice that this can end quickly. You never know what’s going to happen. I just don’t want to have any regrets.”

After he was released three times in 2017-18, Odenigbo broke out with seven sacks in 2019 — and half that total in 2020. While the Giants are hoping for a repeat of two years ago, the truth is either number is higher than any edge rusher returning to the team. If Odenigbo can generate outside pressure, it only can help defensive tackles Leonard Williams and Dexter Lawrence build off their totals of 11.5 and four sacks, respectively.

“The sacks will come, for the most part,” Odenigbo said. “I just have to do my job and take it one day at a time. That’s when I’ve seen the most success in my career.”

Odenigbo was back on the practice field Thursday after missing a day for a non-football issue. He should get plenty of opportunities Saturday against the Jets, with Lorenzo Carter ruled out and Elerson Smith, Oshane Ximines and Ryan Anderson all in the infancy of training camp after recovering from injuries.

“He’s a high-motor guy who’s got some good speed and power,” coach Joe Judge said. “He has really good measure on a tackle. He can really dip and crank, and turn that edge and make a play. Definitely a guy who goes 100 percent all the time.”

Before signing his one-year, $2.5 million contract, Odenigbo called former Northwestern teammate Dean Lowry, who played under Giants defensive coordinator Patrick Graham with the Packers. The feedback indicated he would learn a lot.

Judge admittedly sees Odenigbo as a situational pass-rusher in nickel and dime more than a potential every-down starter. Even in sub packages, Odenigbo must do more than he did with the Vikings, where he only played 13 snaps in coverage last season, according to Pro Football Focus.

“Learning a concept like this is good. I’m to the point where the more you can do, the longer you can prolong your career,” Odenigbo said. “I just want to be a dependable guy. One thing about these coaches is they know your strengths and weaknesses, and they can carve you a niche once you put the work in.”