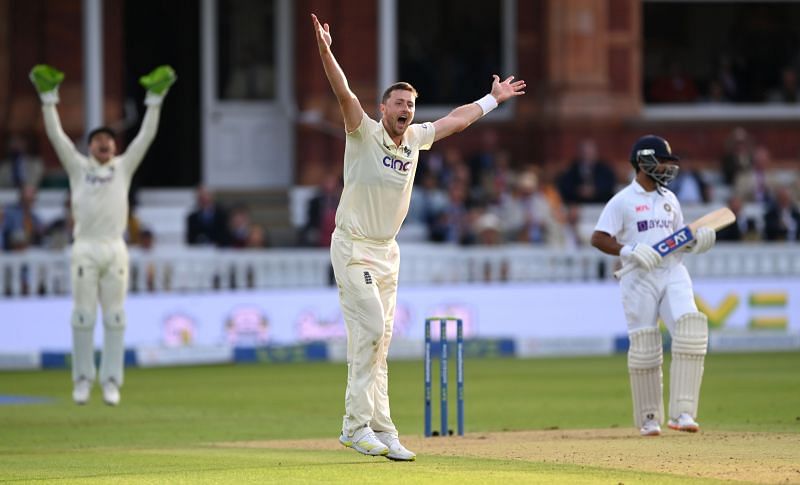 Although Team India dominated the opening day’s play against England at Lord’s, former English pacer Steve Harmison feels that the visitors haven’t run away with the game yet. According to Harmison, England’s bowlers did well under the conditions and quick wickets on Day 2 can bring them back in the game.

India ended Day 1 of the Lord’s Test at 276 for 3 with KL Rahul unbeaten on 127. Rahul featured in an opening stand of 126 with Rohit Sharma (83) as India batted first after losing the toss.

Speaking to ESPN Cricinfo, Harmison credited England’s bowlers for a good all-round effort but conceded that Rahul was too good on the day. He said:

“It was a fantastic day of Test match cricket. India haven’t completely run away with it – 276 for 3 in 90 overs. England stuck to their task well, bowling against a very good player. I think KL Rahul showed big guts and determination against the short ball. He showed a lot of patience against the ball that moved a little bit. There was a huge amount of class in his extra cover drives and his back foot punch.”

“He had an element of luck. England bowled some good balls in the right areas. Rahul played and missed a few times. But he deserved that hundred and deserves his name on that honour’s board. He has put India in a fantastic position going into Day 2,” Harmison added.

The 42-year-old former England pacer backed Joe Root’s decision to bowl first, pointing out that it was the correct decision at the time (during the toss) since the conditions were overcast. He opined:

“I thought it was a very good wicket. Ollie Robinson stuck to his task very well – 23 overs. It was a cool day, the ball was doing a little bit. There was no real pace in the surface. Good bowling all-round. I thought England stuck to their task very well.”

“England will need to make early in-roads. That hard work will pay off if England can get early wickets on Day 2. I don’t think it was the wrong decision to bowl first. After the little shower, it was pretty decent conditions to bat. Both captains will be relatively pleased,” Harmison added.

England legend Jimmy Anderson bowled 20 overs on the opening day of the Lord’s Test. The 39-year-old was a doubtful starter for the match due to fitness issues ahead of the game.

“The amount of overs Jimmy Anderson has already bowled, I just hope from England’s point of view, that he doesn’t break down. He has already bowled 20 overs on the first day’s play. He also bowled a long spell in Nottingham. Tomorrow’s (Friday) first hour will be very crucial. India want KL Rahul to continue and Ajinkya Rahane to regain some confidence. If Rahane is in full flow, he can score quickly and put pressure back on the opposition.”

Day one highlights with Hindi commentary 👇

While Anderson and Robinson were the wicket-takers for England on Day 1, Sam Curran and Mark Wood went wicketless, having bowled 18 and 16 overs respectively.