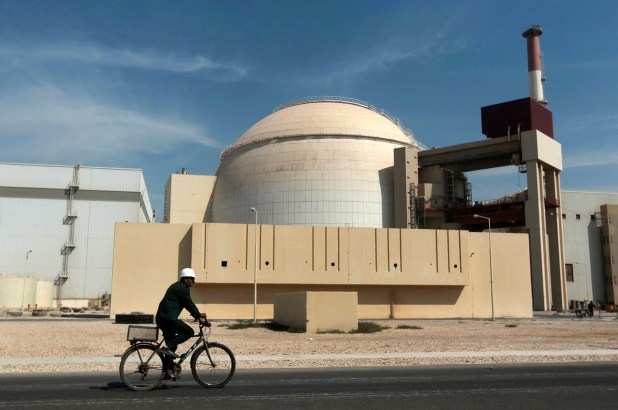 A worker rides a bicycle in front of the reactor building of the Bushehr nuclear power plant, just outside the southern city of Bushehr. Iran’s sole nuclear power plant has undergone a temporary emergency shutdown, state TV reported on Sunday, June 20.
AP

Iran’s lone nuclear power plant was temporarily shut down over an unexplained emergency, according to the authoritarian nation’s state-run media.

It’s the first time Iran has reported an emergency shutdown of the plant, which was built with Russian backing as part of a nonproliferation agreement.

Nuclear officials warned three months ago that US imposed sanctions on Russia, Iran’s nuclear partner, could bring production at the plant to a halt.

Iran has been unable to procure parts and equipment for the plant since the sanctions took hold in 2018.

Bushehr is fueled by Russia-produced uranium. It’s monitored by the United Nations’ International Atomic Energy Agency, which did not comment on reports of the shutdown.

The plant sits near active fault lines and has been previously shaken by temblors, but there has been no significant seismic activity near the port city in recent days.