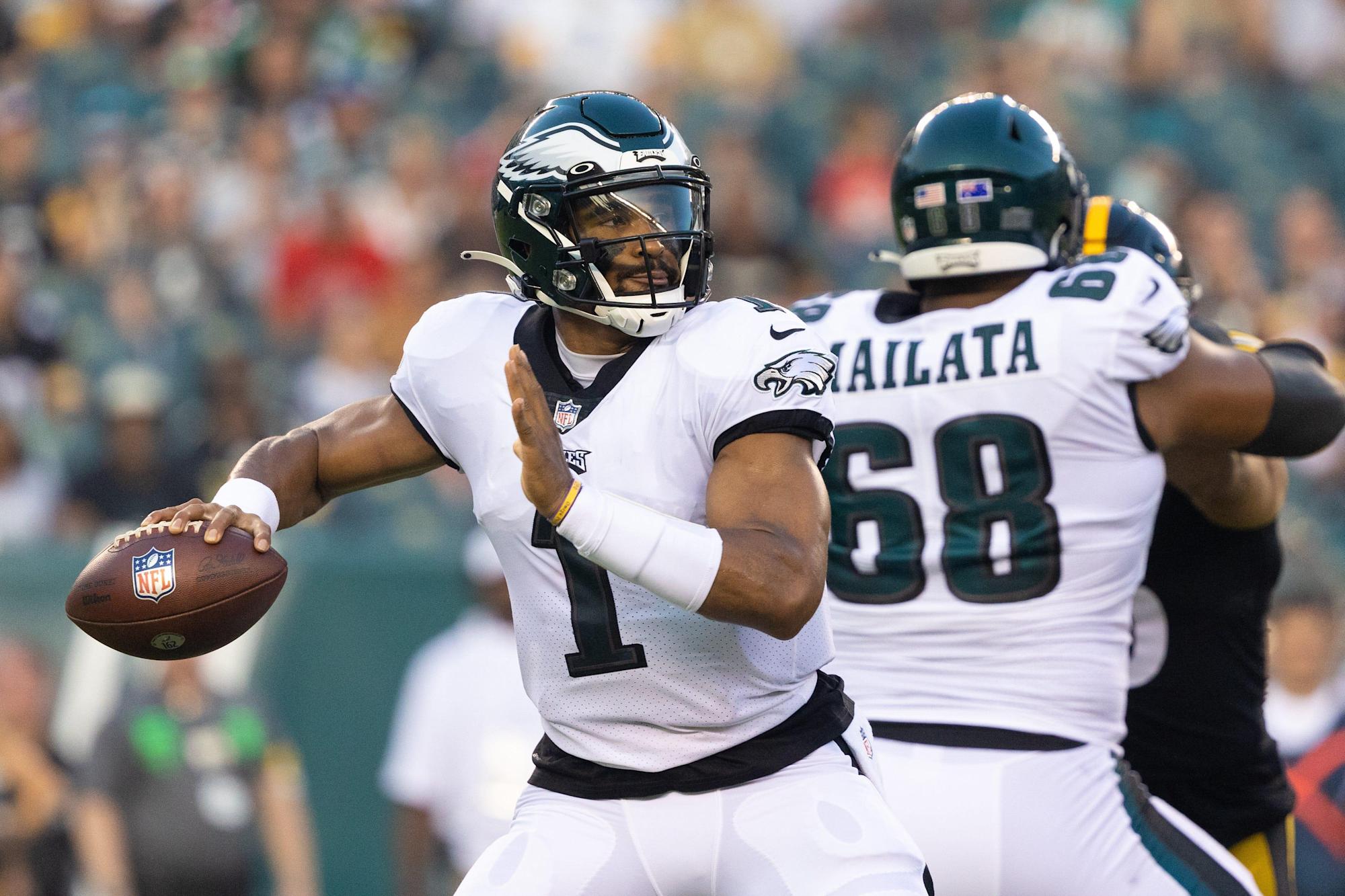 PHILADELPHIA – There wasn’t much gleaned from Jalen Hurts’ debut as the Eagles’ starting quarterback in the preseason opener against the Pittsburgh Steelers on Thursday night.

So Hurts mostly stood in the pocket. For the most part, he did well, or at least better than he looked through two weeks of training camp practices. Hurts played the first two series in the Eagles’ 24-16 loss to the Steelers, completing 3 of 7 passes for 54 yards.

The highlight was a 34-yard completion to Dallas Goedert. The lowlight was when he overthrew a wide-open Quez Watkins deep down the sideline, which would have gone for a 98-yard touchdown.

NFL preseason: One question for all 32 NFL teams to answer

Hurts also had two passes dropped – one by Jalen Reagor and one by Zach Ertz.

“He made a really good check and a great throw to (Goedert) for a big play,” Sirianni said. “He saw what defense was coming, and he checked to the play. A ton of credit to him for that and making a perfect throw there. I thought he went where we wanted the ball to go … He had a couple drops in there. I was really pleased with him.”

The outing was significant for Hurts, who hadn’t gotten hit in an NFL game since the season finale against Washington on Jan. 3.

Hurts completed his first pass over the middle to Ertz, followed by the 34-completion to Goedert. But Reagor and Ertz dropped Hurts’ next two passes, and the Eagles had to settle for a 47-yard field goal.

Hurts got a second series, and again, the results were mixed.

He began it by overthrowing Watkins. When asked what Hurts would like to change on that play, he replied: “I’d like to have a 98-yard touchdown. Simple as that.”

Hurts came right back and hit Ertz for a 13-yard gain. The drive stalled when Hurts, escaping pressure, picked up 4 yards on a third-and-6.

Joe Flacco replaced Hurts after the series and played the rest of the first half as the Eagles built a 16-7 lead. Flacco completed 10 of 17 passes for 178 yards and a touchdown.

That TD was a short pass to Watkins, who burst through the Steelers defense and turned it into a 79-yard touchdown.

“He’s not a secret anymore,” Hurts said about Watkins, the Eagles’ sixth-round pick in 2020.

Sirianni hasn’t officially named Hurts the starting quarterback. But Hurts has taken every first-team rep in practice. And there was nothing Thursday night to indicate that might change.

Watkins has easily been the Eagles’ best wide receiver in training camp, at least as long as DeVonta Smith has been out with a knee injury.

Watkins last week called himself the fastest of the Eagles’ wide receivers. And twice, he showed why.

There was the deep ball in which Watkins got well past his defender, only to have Hurts overthrow him.

Watkins showed his speed again on the next series, when he caught a wide receiver screen from Flacco, burst through a hole and ran past the Steelers’ defense.

Sirianni said Flacco checked to that play to Watkins after seeing the kind of defense the Steelers were in.

“As soon as he checked, I kind of just starting smiling a little bit,” Watkins said.

That was Watkins’ only catch of the night. But really, he should have had two receptions for 177 yards.

Nick Mullens, who started eight games for the 49ers last season, had a rough second half for the Eagles.

His first pass was intercepted. Mullens got another big chance in the fourth quarter following an interception by Elijah Riley that set the Eagles’ up at the Steelers’ 29.

But on third-and-11, Mullens’ pass, intended for Adrian Killins, was intercepted by Lafayette Pitts.

Mullens finished 1-for-5 for 4 yards with the two interceptions.

“No concern,” Sirianni said. “He’s been having a good camp. Gotta learn from the mistakes and get better.”

It was a relatively strong night for the Steelers’ QBs. Mason Rudolph got the start and went 8-for-9 for 77 yards. Dwayne Haskins came on in relief and went 16-for-22 for 161 yards with a touchdown. Joshua Dobbs went 5-for-6 for 30 yards to round out the night, though his one incompletion was an interception.