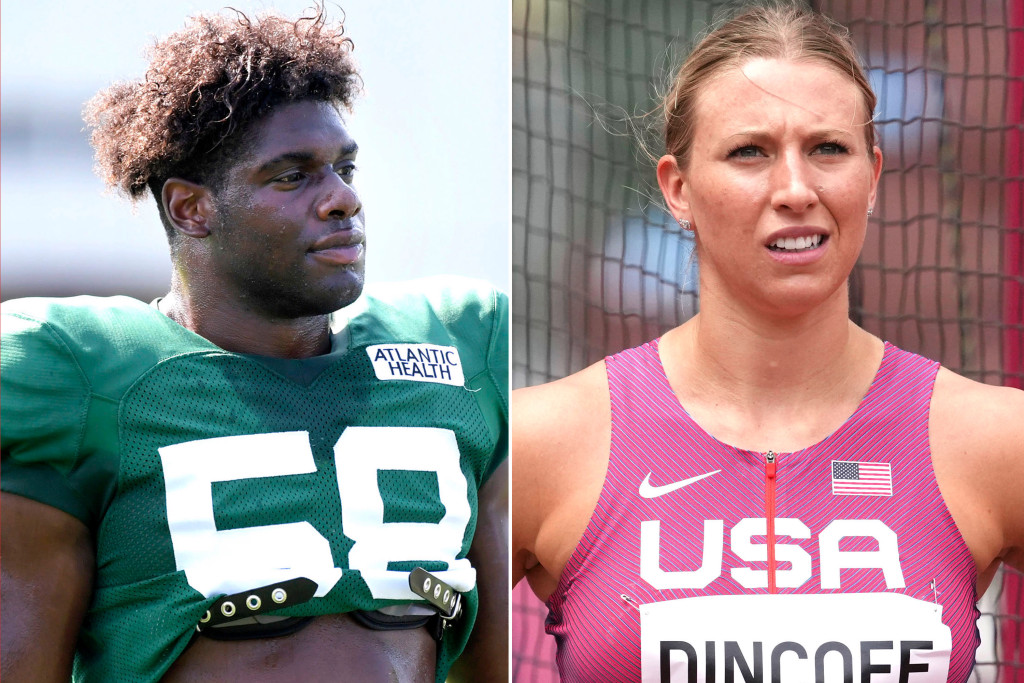 Jets defensive end Carl Lawson had a personal interest in watching the Tokyo Olympics — with his girlfriend, discus thrower Rachel Dincoff, competing for the United States.

Dincoff, who met Lawson while they both attended Auburn, finished 12th in her qualifying group earlier this month.

“It was super-inspiring. Bro, you went to the Olympics. She’s better in her field than I am right now at mine,” Lawson said after practice Thursday in Florham Park. “I’m trying to be an Olympic defensive end.”

Lawson, the Jets’ $45 million free-agent signing, actually has been one of the buzzworthy names of training camp, regularly drawing raves from first-year head coach Robert Saleh for his ability to reach the quarterback.

Lawson recorded 20 sacks over his first four NFL seasons with the Bengals, but the 2017 fourth-rounder didn’t become a starter until last year, making 11 starts in 16 appearances.

“I’m not bashing anything I’ve played before. But it’s kind of like being on chains, and then breaking the chains,” Lawson said. “That’s how I kind of feel in this system. It’s being unleashed.”

Asked why his bull-rush move has been so effective for him, the 265-pounder said it’s about leverage and angles “and being strong as s–t.”

He’s recorded several “sacks” throughout camp, even though Zach Wilson and the other quarterbacks in red jerseys are not allowed to be hit.

Told he’s looked “unstoppable” at times during 11-on-11 drills — often against starting left tackle Mekhi Becton — Lawson said, “There are certain situations where I’ve gotten blocked, but that’s what I’ve been working towards, to be that. I’m improving a lot, learning a lot. I’m excited. Just getting little details, and starting to do things on command. [It’s] starting to go pretty much as I planned. The practice reps have been invaluable.”

In that regard, Lawson compared his improvement with the Keanu Reeves character Neo from “The Matrix” movies. He said his game is being honed by repetition, “where like the next move, he’s just doing it, and that’s kind of what I’m getting to as a player.”

Lawson also believes “the sky’s the limit” for the Jets’ revamped defensive line and pass rush, especially with defensive tackle Quinnen Williams (foot surgery) expected to come off the PUP list and resume practicing next week.

“I’m excited to get him out there so we can get everybody rolling,” Lawson said. “This is a deep, talented group, and I’m excited for him to be able to learn and develop and get the nuance of the scheme just like I have.”

Of course, Lawson’s breakout play already has raised expectations from the team and its fans. He’s looking forward to getting reps in the preseason opener Saturday against the Giants.

“I have my own expectations. I’m the hardest critic on myself, day in and day out. I appreciate it. I want to go play for the fans and want to do the best I can,” Lawson said. “I think this league is about matchups, different body types, different schemes, and I want to be dominant against them all. That’s the player I’m striving to be.”