Kamaru Usman, Colby Covington, and Leon Edwards have been embroiled in a massive dispute recently.

The Englishman has been campaigning for a shot at the UFC welterweight belt for quite some time, and it seems Kamaru Usman’s manager, Ali Abdelaziz, has dropped the hammer on how that fight will play out.

The Egyptian manager extraordinaire took to social media in a bid to offer his two cents on the outcome of the fight that several people have been trying to make for quite some time.

What’s more, Abdelaziz put his money down on a rather decisive win for Kamaru Usman.

Is Kamaru Usman vs. Leon Edwards the fight to make?

While the English southpaw may be coming off a win against one of the most well-known names in the UFC in Nate Diaz, the fight did not unfold the way ‘Rocky’ would have liked it to.

Although Edwards recorded a decisive victory by way of unanimous decision, the dying seconds of the fight saw Edwards getting rocked by a resurgent Diaz.

Admittedly, it was too little too late; however, Diaz’s last-ditch effort at putting the Birmingham native to sleep put the latter’s title hopes in jeopardy.

‘Rocky’ walked into the fight as a viable contender to compete for the title; however, Diaz’s last-minute heroics left a huge indelible stain on the legitimacy of Edwards’ claim to the 170lbs throne.

In the aftermath of the fight, both Kamaru Usman and UFC President Dana White said as much.

While the former only commented on the detrimental effects of Edwards’ performance on his shot at UFC welterweight gold, White touted Colby Covington for a shot at the title ahead of the Englishman.

While many claim that pushing ‘Chaos’ for a shot at the title ahead of Edwards has more to do with business, fans would rather watch a fight unfold between two arch-nemeses over a lackluster thumping of Leon Edwards.

Also Read- “Leon has earned, Colby will sell” – Adam Catterall explains why Colby Covington, not Leon Edwards, is next for Kamaru Usman

Leon Edwards willing to wait for a shot at UFC gold

Although it is not the most convenient turn of events for Leon Edwards, the southpaw has a rather positive outlook on how the title picture is unfolding.

“Let’s say they do give Colby the title shot, I’m not fighting no one else unless it’s a title shot. That’s just it. I’m not gonna start fighting 10, 11, 12 fights and still ain’t got a title shot. I’ve earned my way,” Edwards said, while in conversation with UFC’s John Gooden.

While he understands how “f****d up” it is, Edwards is more than happy to sit on his golden ticket and take on the victor of the rematch between Kamaru Usman and Colby Covington.

If things go down just the way he envisions it, there’s a long wait ahead for Edwards.

Do you think he deserves a shot at welterweight gold yet? Let us know in the comments section! 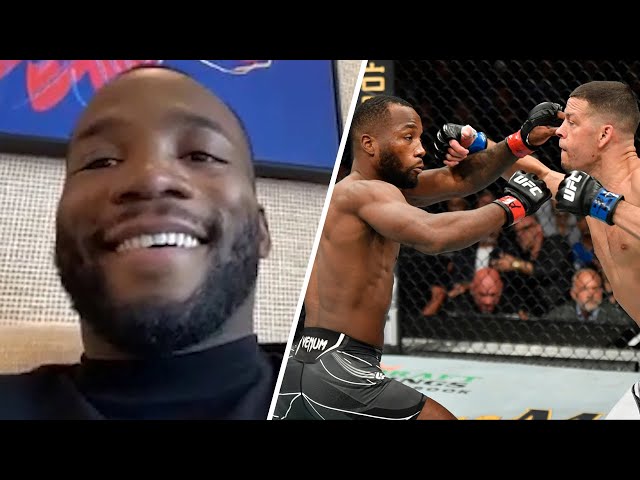