Retired MMA superstar Khabib Nurmagomedov hails from the Dagestan region of Russia. The former UFC lightweight champion is widely regarded as one of the nation’s best fighters and one of the greatest to ever compete in MMA.

During a recent media scrum after an event in Kyrgyzstan held by his Eagle Fighting Championship promotion, Khabib Nurmagomedov answered several questions.

The former champ was asked why a lot of fighters from his team are signed with Bellator and whether it’s because it’s harder to make it to the UFC. ‘The Eagle’ responded by stating:

“Guys, it’s really hard to sign with the UFC, indeed. The UFC doesn’t need anybody – they are very comfortable in all respects. It takes a really special talent to make them sign you, especially when it comes to Russian fighters. They can see our guys are very tough, and when they get there, they just beat everybody.”

Speaking about Gadzhi Rabadanov and his signing with Bellator, which came after Khabib failed to get him into the UFC, ‘The Eagle’ said:

“So, it’s not easy to make it there. For instance, Gadzhi (Rabadanov) had the visa. I would’ve signed him to the UFC if I could. But I failed. But it worked out with Bellator. Same thing with Mehdi (Dakaev). If he gets the visa and goes to the US, I will get him the contract for sure. I don’t have preferences – everyone who fights in this league, everyone who wants to get there will have my assistance. No matter if it’s Malachiev or Rashid Vagabov – I treat everybody the same. Of course, I have got some personal sympathy for some guys, for example – Busurmankul. He represents a whole country – 10,000 people came here to support him. Of course, I’m rooting for him. It’s all clear as day.” (h/t RT Sport MMA) 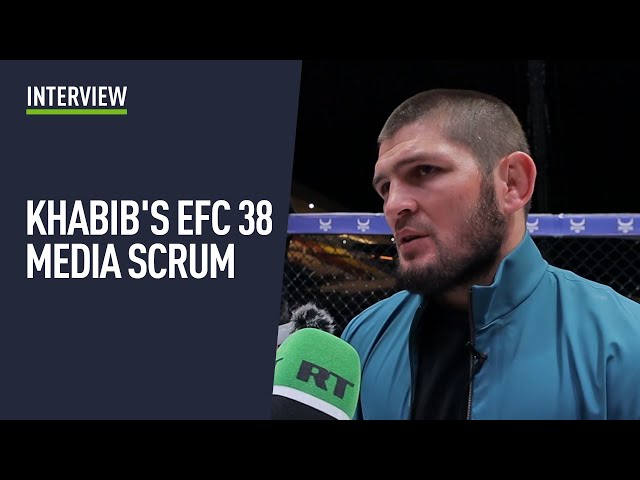 Be it in his native Dagestan or at the American Kickboxing Academy (AKA) in San Jose, California, Khabib Nurmagomedov helps his training partners improve and excel.

‘Coach Khabib’, who’s 7-0 in 2021, has taken on an increased coaching role following his retirement from MMA.