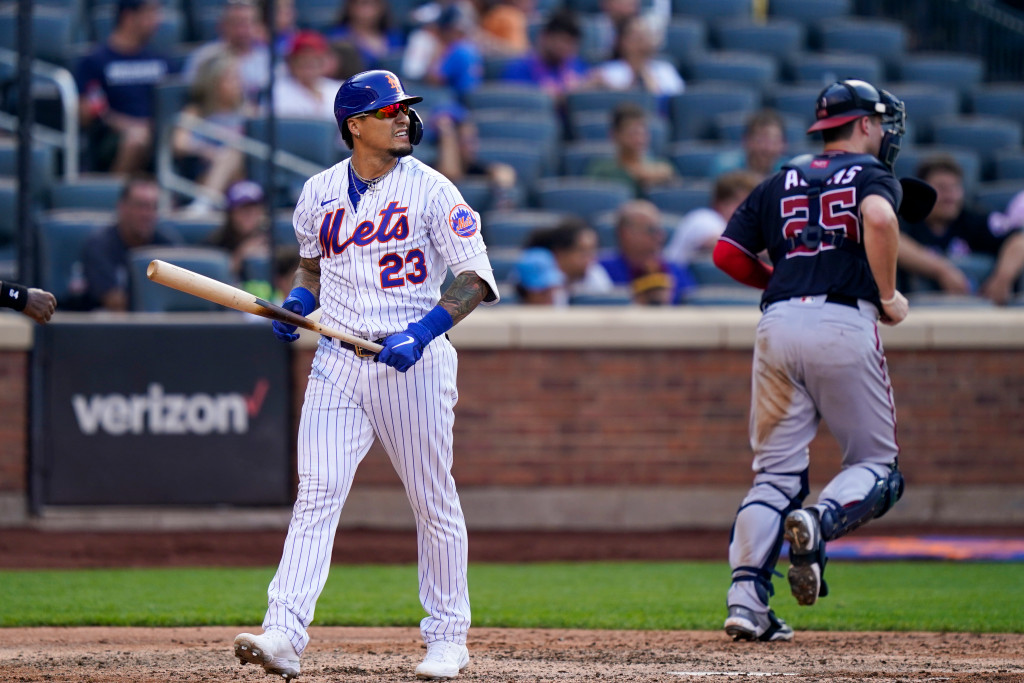 In the three games since Javier Baez left Sunday’s loss with hip and lower-back tightness, the Mets infielder has just one at-bat.

The club’s big trade-deadline acquisition remained out of the lineup for both ends of Thursday’s doubleheader sweep of the Nationals. Though manager Luis Rojas said Baez was available off the bench, his status was still cloudy heading into a big weekend series against the Dodgers.

“To start this game is not the right thing to do,” Rojas said before the twin bill.

Baez’s only action during the Nationals series came Wednesday night, when he struck out on three pitches as a pinch hitter. The Mets used Albert Almora Jr. and Kevin Pillar as pinch hitters Thursday, while Baez stayed on the bench.

“When he swung [Wednesday], he told me he felt good, but still not there,” Rojas said. “For Javy to get two or three at-bats in a game and go out there to play defense and do all those things, I don’t think it will help for the back/hip to get better. The one at-bat getting out there, he can do some damage. He can help the team out and it wouldn’t aggravate the area.”

After having an active day Wednesday, including taking batting practice for the first time since straining his right oblique last month, Francisco Lindor was feeling “good” Thursday, according to Rojas. Lindor had a planned light day Thursday, but is expected to hit on the field again Friday.

“It was a good response out of the day [Wednesday],” Rojas said. “It’s been a really good week for him.”

Jacob deGrom, who returned to the Mets on Wednesday after tending to a family matter, is expected to undergo an MRI exam in the next few days to determine whether he can begin throwing again.

Rojas did not know which day deGrom would get the follow-up exam, but if it comes back clean, he could begin throwing again to build back up for a potential September return. The two-time Cy Young winner last pitched on July 7.

Pete Alonso got hit in the right hand with a 95 mph sinker in Game 1 and jawed at Nationals reliever Andres Machado on his way to first base. But the teams remained in their dugouts and Alonso proved no worse for wear.

Tomas Nido recorded his first career stolen base in Game 1, swiping second in the fourth inning.

In Game 1, the Mets scored four runs in three innings off Nationals spot starter Sean Nolin, the Seaford High School product who was called up for his first MLB appearance since 2015.