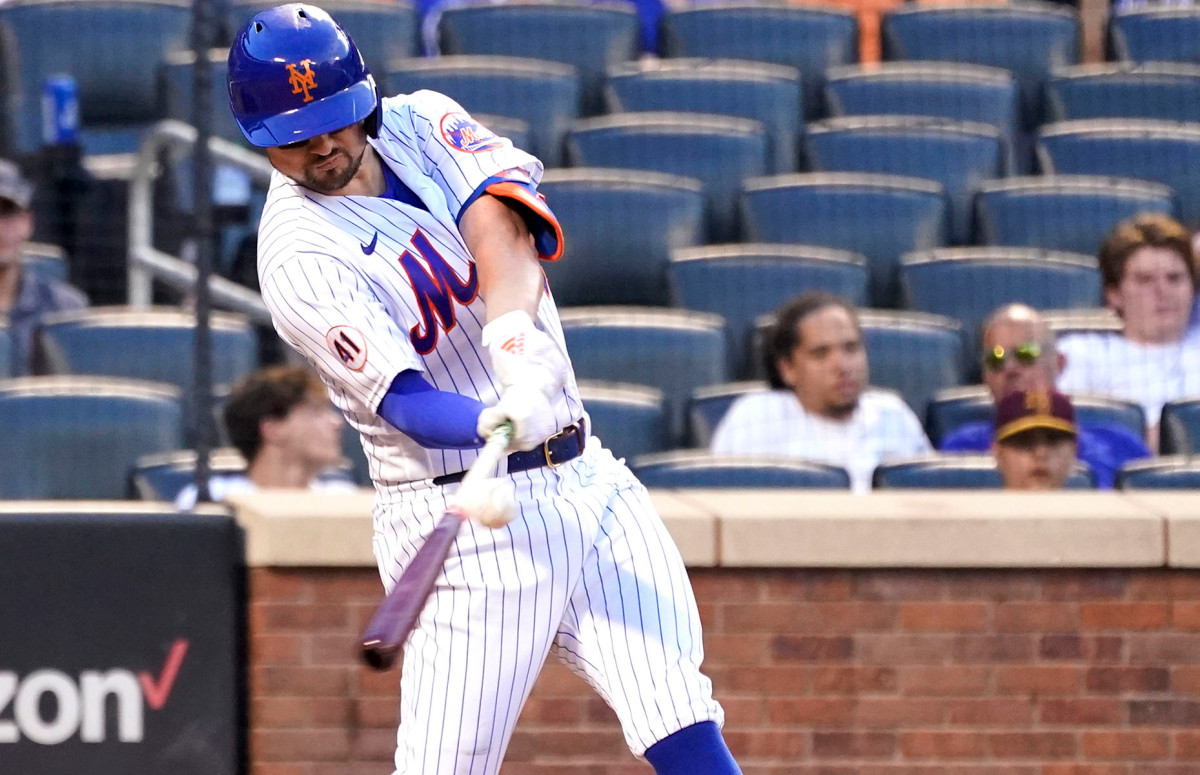 A day after acting general manager Zack Scott called the Mets’ current stretch “unacceptably bad,” they took a step toward rinsing off the stench.

It required some help from a Nationals roster that was dismantled at the trade deadline, but the Mets gladly accepted it as they snapped a four-game losing streak with an 8-7 comeback win Wednesday at Citi Field.

In the resumption of the game that began Tuesday night and was suspended in the second inning, the Mets erased a pair of three-run deficits to win their first game in a week.

Brandon Drury continued to come through in the clutch as a pinch hitter, blooping a single beyond a drawn-in infield in the eighth inning to score Jonathan Villar to put the Mets ahead — capturing their first lead since last Wednesday against the Marlins.

Villar had reached on an error earlier in the inning while trying to put down a sacrifice bunt. Instead, J.D. Davis, who led off with a double, came around to score the tying run as Nationals reliever Mason Thompson’s throw to first was wild. Villar advanced to second on the error and moved to third on James McCann’s swinging bunt.

Edwin Diaz closed out the win in the ninth as the Mets (57-55) won for just the second time in nine games. Marcus Stroman was set to start the nightcap against the Nationals (50-63), who traded away most of their useful pieces in a sell-off at the deadline.

Pete Alonso had narrowly missed out on tying the game in the seventh inning with a shot to left-center field. Instead he settled for an RBI double off the top of the wall, scoring Brandon Nimmo from first to get the Mets within 7-6.

But Alonso was stranded at second as Dominic Smith and Michael Conforto popped up to end the threat.

The suspended game resumed in the top of the second inning, with the Mets trailing 3-1.

Rich Hill, who was originally scheduled to start Thursday for the Mets, instead took the mound Wednesday for the resumption of the suspended game. The 41-year-old inherited a runner on first base, Riley Adams, who immediately moved to second on a sacrifice bunt by pitcher Paolo Espino. Adams came around to score on Victor Robles’ fly ball to left field, which Smith leapt for near the wall but could not catch. It was ruled a double, giving the Nationals a 4-1 lead.

The Mets began their comeback in the third inning off Joe Ross, who was replacing Espino, Tuesday’s starter. Nimmo led off with a double and scored on a single by Jeff McNeil to make it 4-2. Alonso then shot a single through the left side before Smith flew out to deep left-center field, allowing McNeil and Alonso to tag up to third and second, respectively.

Conforto came up next and hit a weak ground ball to first base, but it was enough to score McNeil to close within 4-3.

Davis then tied the game when he roped a two-out double to left field.

Hill had settled in after the second inning but was unable to record an out in the fifth. He issued a leadoff walk to Yadiel Hernandez before giving up a bloop single through the vacated right side to Carter Kieboom. Hill then went 3-0 to Luis Garcia, who got the green light and ripped a two-run double to the gap to put the Nationals up 6-4.

That spelled the end of Hill’s day. Jeurys Familia relieved him and allowed a single up the middle that pushed the Nationals’ lead to 7-4.

The Mets got one run back in the bottom of the fifth. Conforto hit a two-out single to right field, scoring McNeil all the way from first — aided by Juan Soto throwing to second base instead of home — to make it 7-5. Conforto was thrown out in a rundown trying to advance to second, though, ending the inning.