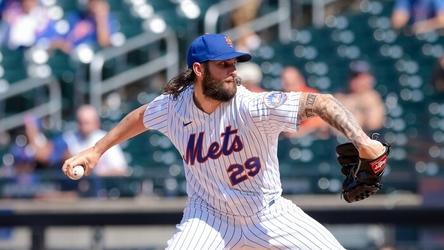 The Mets scored two in the fourth and two in the sixth but allowed three runs in the seventh, which, in the end, set up a walk-off home run for Pete Alonso.

Here are a few takeaways…

Seth Lugo got the final two outs in the fifth, then threw a scoreless sixth inning.

2. Trevor May came on for the save in the seventh, but got only one out before leaving with the based loaded. In an emergency situation, Jeurys Familia came on and got the second out, but threw a pass ball that allowed a run and a single that tied the game at four. The two-run single just evaded the glove of Jeff McNeil, who perhaps could have taken a better angle to the ball.

Familia regrouped to get the third out without allowing the Nationals to get the go-ahead run.

3. In the bottom of the seventh, McNeil grounded out to start, which brought Alonso to the plate. His towering homer (launch angle: 42 degrees) was the Mets’ ninth walk-off win of the season.

4. The Mets got the 4-1 advantage entering the seventh by scoring two in the fourth and sixth. In fourth, Michael Conforto — who went 4-for-6 for the day — lined a double to start the inning, then J.D. Davis drove him in for a 1-0 lead. Jonathan Villar drilled a single, and James McCann got Davis home with a fielder’s choice to make it 2-0.

5. In the sixth, Villar’s two-run home run equaled a 4-1 lead, which looked like it might have clinched the win. It turned out they’d need one more frame to finally earn the sweep.

6. Juan Soto, one of the few quality players left on the Nationals, gave Mets pitching a headache all series. He walked more times (six) than New York got him out (three) and added three hits and a home run.

7. With the win, the Mets now have a three-game winning streak for the first time since June 14-16. It was also their third doubleheader sweep in 12 tries. They’ve split the other nine.

The Mets begin a three-game home series with the Dodgers starting Friday at 7:10 p.m. on SNY.