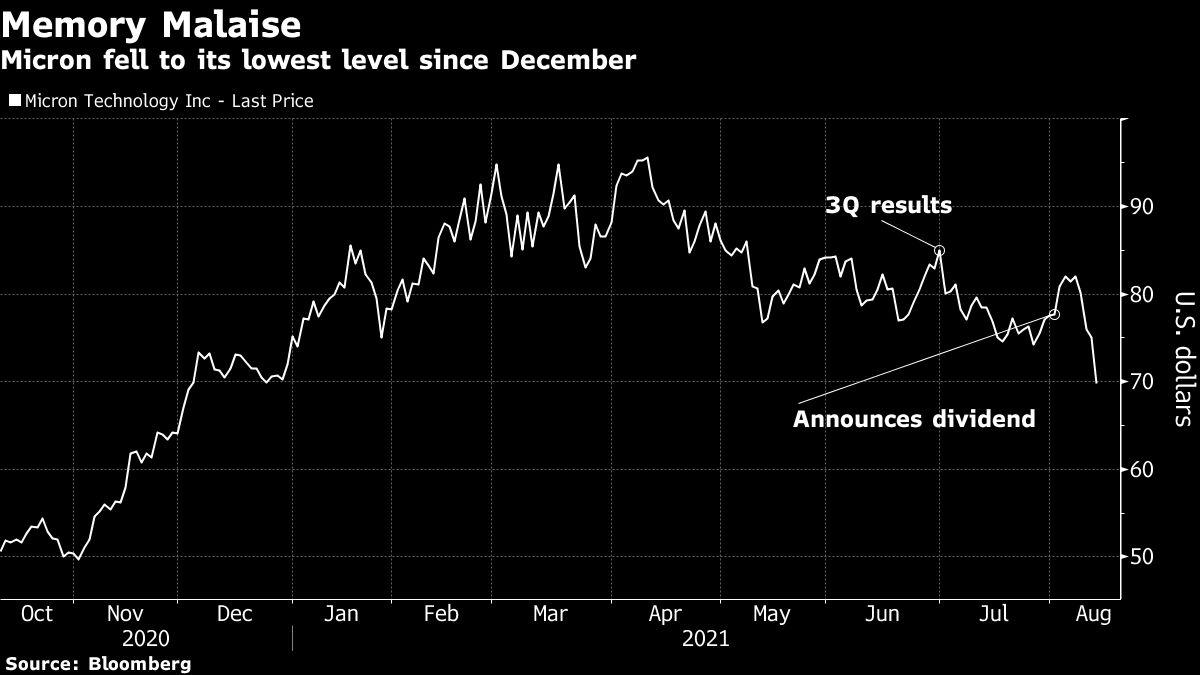 (Bloomberg) — Micron Technology shares tumbled on Thursday, extending a recent decline as concerns mounted over the market for memory-related semiconductors.

The day’s slump came after Morgan Stanley downgraded the stock to equal weight from overweight as a part of a broadly negative call on the market for the DRAM category of memory chips, Micron’s largest product in terms of revenue, according to data compiled by Bloomberg.

“DRAM conditions are losing steam, and our inflection signposts suggest caution from here,” analyst Shawn Kim wrote. The firm wrote that there’s been a change from mid-cycle to late cycle, and that “this phase-change has historically meant a challenging backdrop for forward returns.”

The weakness took Micron to its lowest level since December, with the stock now the fifth-worst performer among components of the Philadelphia Stock Exchange Semiconductor Index. That index is up more than 18% in 2021. Peer company Western Digital also dropped 7.9% on Thursday.

The potential for weakness in memory components has dogged the stock throughout 2021. In late June, Micron’s results and outlook raised concerns that demand could be peaking.

This view is not a consensus on Wall Street, though. Rosenblatt Securities wrote on Thursday that concerns over the DRAM market were “overblown.” Analyst Hans Mosesmann expects the DRAM cycle “will be extended and large,” and wrote that he was still a buyer on Micron shares. He added that Micron’s recent move to implement a dividend is a sign of confidence, as this “is not an exercise done willy-nilly.”

Separately, MKM Partners wrote that the sell-off resulting from Morgan Stanley’s downgrade “will most likely mark a near-term low in the stock.” Dan Forman, the firm’s technology sector specialist, wrote that Micron appears nearly oversold, and that he views the stock as “opportunistic with when pessimism levels are high,” a condition he sees as met by the downgrade.

More than 80% of the firms that cover Micron recommend buying it, while none have the equivalent of a sell rating, according to data compiled by Bloomberg. The average analyst price target is nearly $115, which implies upside of 65% from its current level.

Subscribe now to stay ahead with the most trusted business news source.