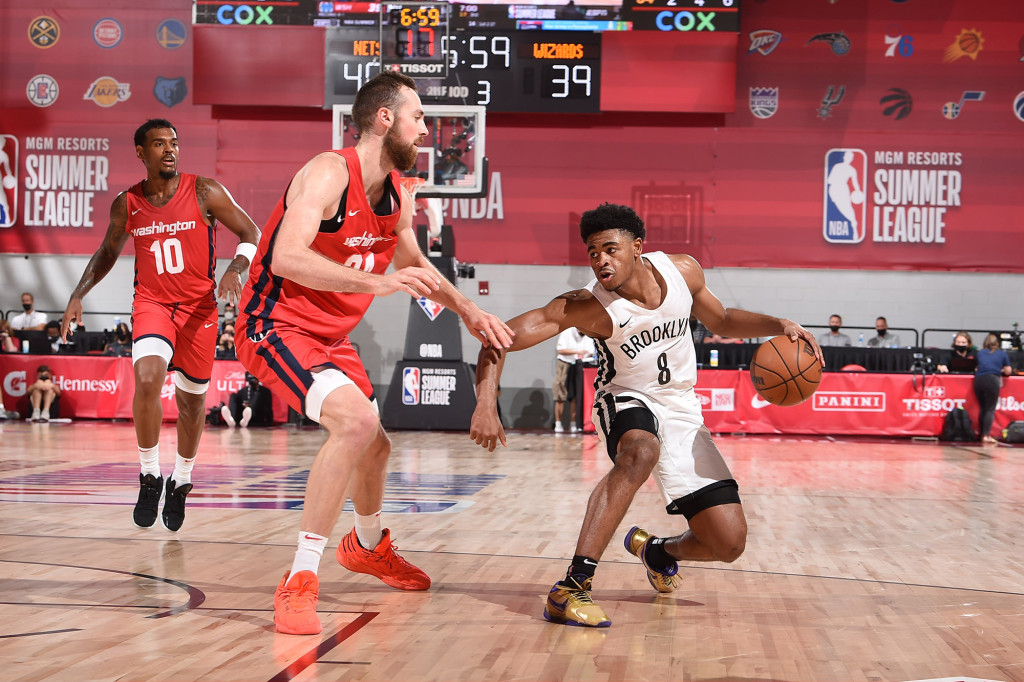 LAS VEGAS — This is what Cam Thomas does.

He gets buckets. He hits winners. And Thursday he hit a 3-pointer to force a second overtime, then topped that with the sudden-death winning trey in the Nets’ thrilling 84-81 summer league victory over the Wizards at Cox Pavilion.

After hitting the winner, Thomas roared in celebration, he was chest-bumped by fellow Nets first-rounder Day’Ron Sharpe and he was fanned by Chris Silva.

“I said ‘I do this.’ Because people always want to doubt me, and doubt my ability to score the ball. It was a great moment because we came back at the last minute,” Thomas said. “We were down five or something, and we came back and won it in double-overtime. I felt like that was a really great moment.”

The Nets had fallen behind by five in overtime, but Thomas drilled a 27-foot step-back 3-pointer with just 6.9 seconds left to knot the score at 81-all.

Then, facing sudden-death in the second OT (the first team to score would win), Thomas handled that too, finishing with a game-high 31 points.

The Nets got the switch they wanted, with 6-foot-7 Corey Kispert on Thomas. He briefly lost the ball, but had the presence of mind to look up — at the shot clock on the far end of the court — and sink a floating 3 off of one foot.

It was the perfect time, stealing a game in which the Nets shuffled their lineup, laid bricks for most of the night, but still stole victory.

“Ultimate gamer, young guy, finds a way,” Ott said. “For a young guy, it’s pretty incredible. … A lot of the day, it was not beautiful. He found a way to carry us.”

Kessler Edwards had a nice two-way game with 14 points and nine rebounds, while Kaiser Gates added nine points and 10 boards. The Nets shot just .321 overall and went 7-for-29 from 3-point range. Washington was just as bad, at .364 overall and 7-for-34 from 3. But the Nets battered the Wizards 58-39 on the boards — and they had Thomas when it mattered.

“There’s only certain types of dudes just have that mentality where they turn it on in clutch time, when it’s time to win. He’s definitely one of those dudes. So he definitely carried us over the top at the end,” said Edwards, no longer surprised after seeing Thomas score 19, 22 and now 31.

“We knew he was a scorer ever since college. So we knew before the first game what he was, and he showed that every single game. So we all know what it is now. So it’s no surprise anymore.”

The legend of the copy machine has come full circle.

Kyle Korver, whose draft rights the Nets sold for cash, part of which went to buying a new copier, has finally joined the team — as a consultant.

The move was reported by The Athletic and confirmed by The Post. Korver will work with the players, while consultant Steve Clifford will work with head coach Steve Nash.