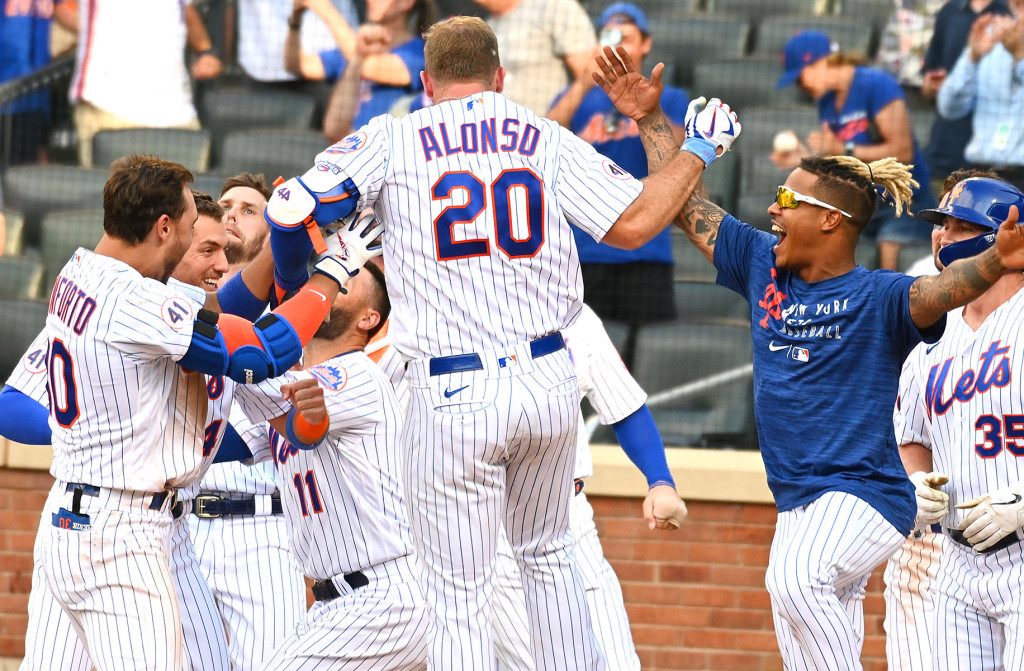 The distance from our nation’s capital to California is roughly 2,700 miles or metaphorically the gap between the Nationals and the Dodgers and Giants.

As a baseball team, this current Washington group is a National embarrassment. These Nats lack talent, then compound it by not playing smart. In the key sequence of a doubleheader opener Thursday, third baseman Carter Kieboom decided to play deep as if Pete Alonso were hitting in the second inning rather than Marcus Stroman, who laid down a two-out bunt single, which got Brandon Nimmo to the plate to hit his first homer off a lefty since August 2019. The three-run shot fueled a 4-1 triumph.

Then no matter how much the Mets insisted on trying to give away the nightcap in the top of the seventh or how deep the Nationals played Alonso in the bottom of that final inning, Washington proved again it will have trouble completing a game with more runs than its opponent. Alonso walked-off the Nats with a one-out homer for a 5-4 win that completed a doubleheader sweep and a three-game series sweep that the Mets had to have.

Because what preceded it was a four-game losing streak that dropped the Mets out of first place and what follows is 13 games exclusively against the Dodgers and Giants, who have spent most of this season as the class of the NL. Think about climbing a flight of stairs. Now, think about Mount Everest. This will be the baseball difference between what the Mets did the past few days and what lies ahead the next two weeks.

“The significance is they will be very playoff-like,” Nimmo said of the coming 13 games. “To be a playoff team, you have to beat other playoff teams.”

You certainly have to own teams such as the Nats. And the Mets did a lot well over 14 innings Thursday to drive Washington 15 games under .500. Stroman, when not doubled over dizzy for a bit from dehydration, pitched well and Trevor Williams gave the Mets better than competence in his debut in Game 2. Nimmo drove in all the Met runs in the opener and Michael Conforto spent two games hitting the ball hard and collecting four hits.

But you cannot ignore the degree of difficulty.

The Nationals had a top-heavy roster at their best this season, and their best was bad enough to convince the organization to be the biggest sellers at the trade deadline — to essentially take the top off. All that remains active of high quality is Juan Soto, whom the Mets smartly walked in five of seven plate appearances Thursday. If you don’t let Soto beat you, Washington will not have many avenues to a win. In Game 1, the Nats started Sean Nolin, who had last pitched in the majors in 2015, and in the nightcap, offered a lineup in which Soto had 19 homers and everyone else had 22.

Part of Washington’s sell-off was to move the best position player (Trea Turner) and best pitcher (Max Scherzer) traded at the deadline. They both went to the Dodgers, whom the Mets will see for three games this weekend — or roughly 14 Turner plate appearances and a Scherzer start in Sunday prime time after Los Angeles already will have unleashed Julio Urias and Walker Buehler at Citi Field. The Sean Nolin portion of the program is over.

“It is a huge test for us,” Alonso said. “There is a lot of potential. Who are we going to face in the playoffs?”

That fits Alonso’s confident temperament — to speak about who the Mets will face in the playoffs. But it is possible the Mets’ fate will be determined on two coasts over two weeks. If they can rise to even 6-7 or better, it is unlikely the flawed Phillies and Braves would get too far away from them. Especially since once the Mets complete this span on Aug. 26 against the Giants, owners of the majors’ best record, they get eight of their next 11 games against these Nationals.

But where would 5-8 or worse in this span versus the Dodgers and Giants leave the Mets? The Dodgers are without Mookie Betts, but Turner and Scherzer keep this the majors’ most talented roster. The Mets are looking at these 13 games without Jacob deGrom and at least a good portion without Francisco Lindor and who knows what they have in Javier Baez and his achy back. Perhaps he did not start any of the games against the Nats because the Mets figured let Baez further heal and they could handle the Nats without him.

With a little nightcap agita, the Mets finished off the gnats. And now …