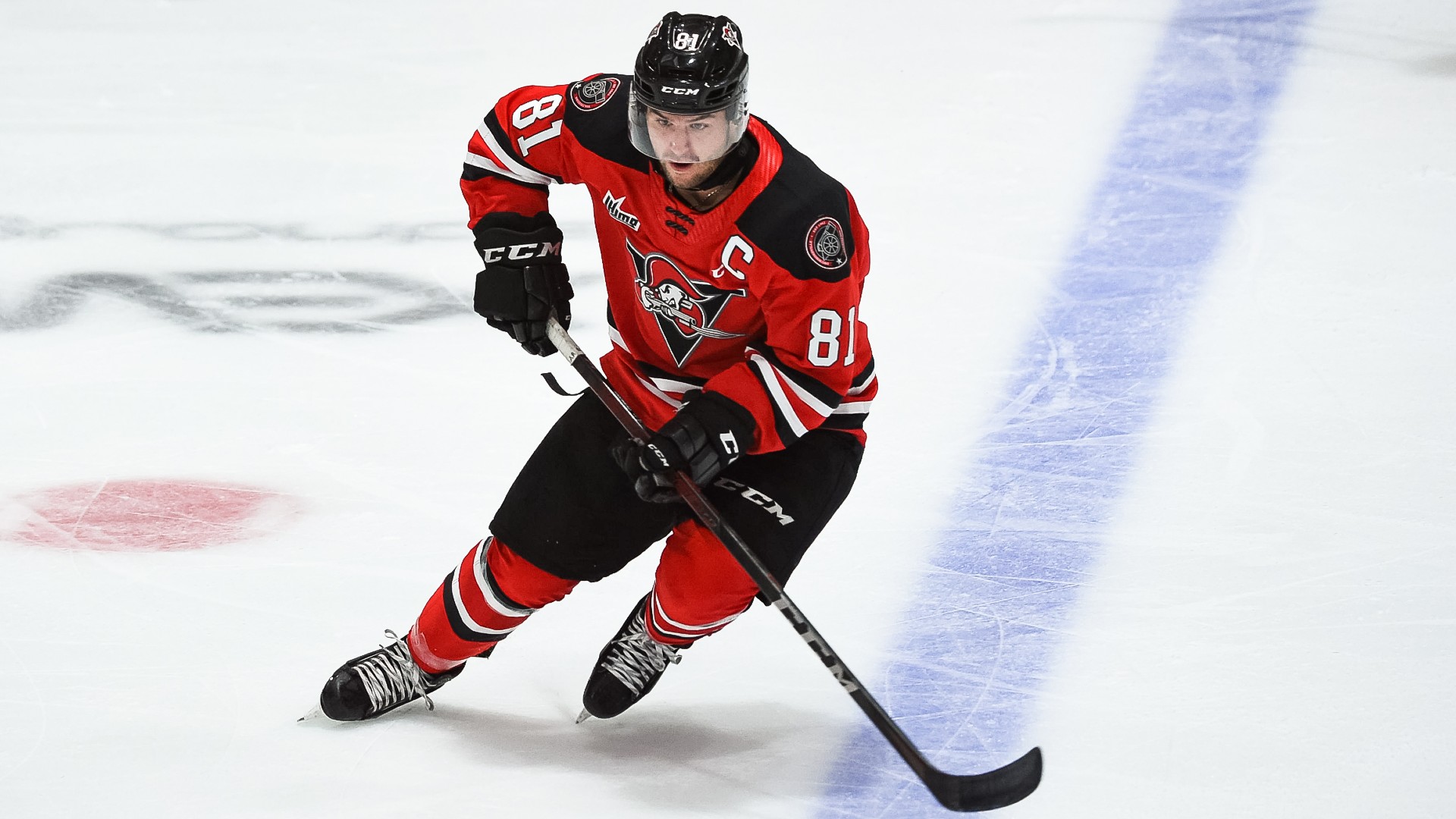 Sometimes it’s just not your year. It happens. And, as they say, there’s always next year.

Next year is now here for a handful of 2021 NHL Draft eligibles who have been passed over in previous seasons and still waiting for their draft dream to be fulfilled. Whether it be injury issues, size concerns, lack of refined skill development or physical maturity, or any number of other red flags, sometimes a prospect needs to show a little patience in order to finally pull on that NHL cap and jersey.

NHL DRAFT 2021: Five sleepers to keep an eye on

This year, as much as any other, will feature a plethora of players — often referred to as draft overagers — that will finally fulfill the next step in their hockey dream. And there’s no shortage of talent among them, either.

Here’s a rundown of five overager candidates that could very well see their name selected sooner rather than later during the draft July 23-24.

There might not be a safer overager to select in the 2021 draft than Moser who is in his last year of draft eligibility. He’s also had the most development time.

The 21-year-old was promoted to captain of EHC Biel-Bienne of Switzerland’s top professional league and has improved by leaps and bounds over his past two seasons of eligibility. He recorded 30 points (nine goals, 21 assists) in 48 games this season and was a standout for Switzerland at the 2021 IIHF Men’s World Championship.

“Moser is a defensively reliable defender who possesses decent skating skills and has improved his offensive skills,” FCHockey scout Dennis Schellenberg said. “He plays a very safe and reliable game in his own zone without committing mistakes.”

It wasn’t always the case with Moser, who also represented Switzerland as a teenager at the 2019 IIHF Men’s World Championship. Given where his game was the two years prior, it wasn’t exactly a surprise that Moser went unselected.

“He did not stand out with his playing style, as he makes safe passes and is reliable in his own zone,” Schellenberg added. “That is not necessarily something that catches eyes immediately.

“On the other hand, it has to be said that he has been improving his offensive game quite a bit during the past two seasons and he started to take over more responsibility with the puck and started to grow into a leader role in his team.”

With some of the issues in his game corrected, Moser is a strong candidate to be selected as one of the draft’s most mature prospects and a candidate to make a quick impact at the NHL level.

“Moser is a much more responsible player and takes over the play when crunch time comes up in games,” said Schellenberg. “He has been very strong offensively this season with EHC Biel and took his game to the next level.”

One of the younger players in the 2020 NHL Draft, Cardwell was just two weeks shy of being eligible in the 2021 class. So, it’s not a surprise he needed a little extra time to better round out his game.

Cardwell finished the 2019-20 season on a heater with the Barrie Colts of the Ontario Hockey League, but it was his time in Sweden this season with Surahammars IF of HockeyEttan that really gave Cardwell an opportunity to live out his NHL draft dream.

“In a deeper draft like the 2020 class, I think it was hard for some of the more project players to stand out,” FCHockey scout Dylan Galloway stated. “In my opinion, I think Cardwell was well worth a late pick last year but did have some warts to his game that makes it understandable that a team would want to see him work out before spending a pick on him.”

After putting up 27 points (nine goals, 18 assists) in 18 games, Cardwell showed that desired improvement. He displayed an up-tempo game that made life difficult on the opposition while also being productive in a professional, albeit lower-level league in Sweden.

“Cardwell is a quick, aggressive forechecker who looks like he could play as a shifty puck retrieval player in a bottom-6 of an NHL team,” Galloway said. “I also see Cardwell as a possibility on an NHL penalty kill due to his good speed and how aggressive he can be on the puck carrier.

“The 2021 draft isn’t quite as deep as previous drafts and I think teams may consider taking re-entries more often than they might in other years.”

“No matter how much weight Simoneau adds to his frame, he’ll always stay 5-7, which bothers some NHL teams,” FCHockey scout Andy Lehoux noted. “And even though he’s shown above-average skating skills and completely dominates opponents in foot races, the belief is that he’ll have difficulties adapting to the next level.”

A favorite overager candidate of many scouts a class ago, Simoneau has continually shown he can play a high-intensity, offensively creative game at the QMJHL level. Scoring has never been an issue for the forward, who amassed 37 points (10 goals, 27 assists) in 27 games in 2020-21 and 89 points (28 goals, 61 assists) in 61 games the season prior.

The productivity and willingness are there, Lehoux suggested.

“Simoneau is an energized, competitive and talented playmaker who is willing to do anything that puts his team in a favorable position to win,” he said. “Drummondville’s captain leads by example, going 110 percent, 100 percent of the time.

“There’s definitely no guarantee Simoneau will get drafted this year since his size is a major concern for teams and he obviously hasn’t grown one bit. That said, his incredible leadership and skill set were on full display this season, which should have attracted the attention of many. Simoneau deserves to be drafted, as he did for the past two years.”

MORE: Run your own custom mock draft at FCHockey

Perhaps no overager showed a bigger season-over-season improvement than Doan.

The son of former Coyotes franchise mainstay Shane, the younger Doan amassed 70 points (31 goals, 39 assists) in 70 games to help guide the USHL’s Chicago Steel to a Clark Cup championship. It’s a remarkable jump from just the 14 points (five goals, nine assists) in 45 games he had in 2019-20.

“Doan struggled to produce offense in his draft year, and wasn’t very big, and due to his size he wasn’t very effective,” FCHockey scout Dylan Krill disclosed. “In the offseason, Doan grew and added more weight which he’s really benefited from. Being able to win more puck battles and become a very reliable, defensive forward who has added more skill to his game has enabled Doan to contribute and produce points on a consistent basis.”

Size (6-1 and 183 pounds), a willingness to improve that led to massive skill development, coupled with a natural understanding of the game, should have Doan on the radar for most NHL teams at the 2021 draft.

“Doan is a two-way winger who brings skill, competitiveness, and responsible decision-making every single shift,” Krill said. “He plays the game with a pro mentality already, understanding what it takes to play a full 200-foot game.”

MORE: Build your own custom NHL Draft rankings at FCHockey

The now 19-year-old will be an interesting overager to watch on the second day of the draft. He did not suit up during the 2020-21 season, making him a bit of a wild card on draft day.

“Hardie wasn’t able to play in any leagues this season, unfortunately,” Galloway said. “But the variability of this draft and having a previous, nearly full season of play to look back on may give NHL teams a bit more confidence in Hardie over some other first-time eligibles.

He was productive in his 18-year-old season with the Mississauga Steelheads, recording 63 points (34 goals, 29 assists) in 59 games. Known for his high compete level and offensive abilities, Hardie had the look of a prospect who just needed more time to develop and fine-tune his game.

Outside of a brief stint at the PBHH Invitational in Erie, Pa., in May, though, Hardie didn’t have a lot of runway to showcase any improvement.

Still, the body of work is still there for according to Galloway.

“Hardie is a hard-working winger who flashed above average, but raw, offensive skills in his draft season and, if he develops to reach his ceiling, he could fit as a depth offensive winger for an NHL team,” he said. “His open ice skating needs some improvement, but I felt his ability and edge-work in tight spaces was a much better asset to him on the offensive side of the puck.

“As a smaller player, I think Hardie needed to improve his overall skating as well his ability to anticipate his teammate’s movements in the offensive zone. His offensive skills really flourished in the second half of last season and I think that had he been able to show that it wasn’t just a hot streak he may have been snapped up later in the 2020 draft.”

Aaron Vickers is the managing editor of FCHockey.