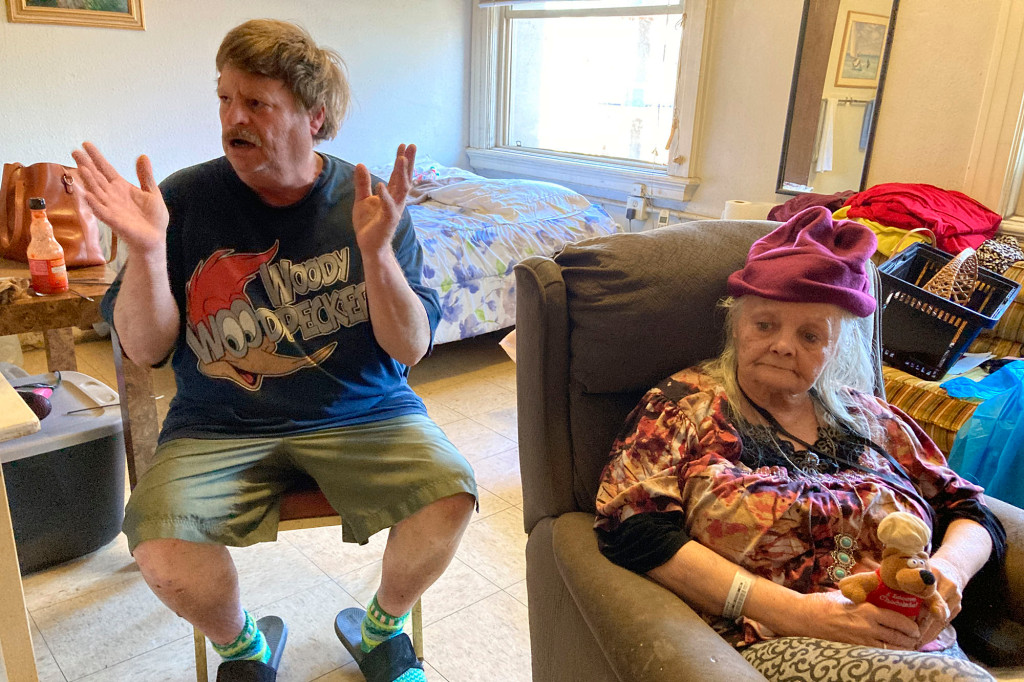 PORTLAND, Ore. — Karen Colby thought she could make it through an unprecedented Pacific Northwest heat wave with a little help from her neighbor, who dribbled cold water on her head and visited every hour to wrap frozen towels around her neck.

But when temperatures in her tiny fifth-floor studio soared to 107 degrees Fahrenheit (42 Celsius), Colby suddenly stopped responding to questions and couldn’t move from her recliner to her walker. The friend called an ambulance, and Colby, 74, wound up hospitalized for 10 days with heatstroke.

“We had just survived the coronavirus and had been in complete lockdown. We were basically in jail here,” said Joel Aslin, Colby’s longtime friend who lives in the same apartment complex for low-income Portland residents who have a disability or are over 62.

“We did everything right and she survived — and then we had that stupid heat wave and that almost took her life,” Aslin said.

The record-smashing heat that swept through cities from Portland to Vancouver, British Columbia, at the end of June silently killed scores of the region’s most vulnerable who could not leave their homes, afford air conditioning or get a ride to public cooling centers.

Consecutive days of temperatures as high as 116 F (47 C) in Portland made a folly of years of planning for more anticipated emergencies such as earthquakes and snowstorms — and it was only as the disaster unfolded that authorities got a sense of how devastating it would ultimately be. Emergency rooms overflowed, 911 calls spiked and death reports rolled in.

The crisis was a wake-up call for the normally temperate Pacific Northwest about what lies ahead with climate change and was a harsh lesson in how unprepared the region is, particularly when it comes to those living on society’s margins.

The median summer temperature in Oregon could increase as much as 10 degrees by the end of the century, according to the Climate Impact Lab, and extreme weather events like heat waves will become more frequent.

“The really important and complex point is that places that are already hot — and are going to get hotter — are already adapted. They have air conditioning and they have homes built for wind to flow through,” said Alan Barreca, an associate professor at the University of California, Los Angeles’ Institute of Environment and Sustainability.

“Definitely the Pacific Northwest is not used to those temps, and so they’re more vulnerable,” he said.

Authorities in Portland spent days leading up to the heat wave warning the public, calling and texting hundreds of the most vulnerable, dispatching volunteers with thousands of bottles of water and opening round-the-clock cooling centers.

Still, it was not enough to prevent what officials labeled a mass casualty event.

While nobody is certain exactly how many died, officials have estimated that the number is in the hundreds in Oregon, Washington state and British Columbia combined.

In Oregon, officials say 83 people died of heat-related illness, and the hot weather is being investigated as a possible cause in 33 more deaths. Washington state reported at least 91 heat deaths, and officials in British Columbia say hundreds of “sudden and unexpected deaths” were likely due to the soaring temperatures.

Most of the Oregon deaths occurred in Multnomah County, home to Portland, where the average victim was white, lived alone and 70 years old. There were more heat deaths in Portland in June than in the entire state over the past 20 years, authorities said.

Cassie Sorensen, who heads a nonprofit that does free grocery shopping and delivery for the homebound, said their phone lines were swamped by desperate clients in need of an air conditioning unit or a ride to a cooling center.

“We have clients who are bedbound or chairbound on their couches, and they were home in the heat until ‘home in the heat’ became a medical emergency and they were in an ambulance taking them to the hospital. It was a bit of a helpless feeling,” said Sorensen, program director of Store to Door.

The crisis also exposed gaps in planning that stymied those seeking transportation to cooler locations.

Leading up to the heat wave, officials publicized the number of a statewide call center that could direct people to cooling centers or help them get rides — but it was unstaffed for more than 24 hours during the peak heat, which fell on a weekend.

More than 700 callers gave up on hold or in the voicemail system as temperatures hit 112 F (44 C); it’s unclear how many needed rides or what happened to them.

Portland’s famed light rail system also shut down during the worst heat to reduce strain on the power grid, eliminating one transportation option for low-income people seeking relief. And many homeless people didn’t want to leave their belongings or pets behind to go to a cooling shelter, advocates said.

“This is great that we’re having a conversation around cooling centers, but what are we doing around people who can’t get there? Those are the people who are literally dying,” said Sorensen, who has been involved in discussions about how Portland can improve.

When a shorter and less intense heat wave struck last weekend, authorities applied some of the easiest lessons. Many more cooling centers opened, buses were free for people headed to those facilities and the statewide call center was staffed 24/7. It included a new option high in the voicemail menu for information on cooling centers.

Gov. Kate Brown activated an emergency coordination center, making more resources available to tribes and local governments, and authorities held a news conference to urge each resident to check on five people during the peak heat.

“We hadn’t experienced an event like that before, so we were working off potential impacts,” said Andrew Phelps, director of Oregon Emergency Management. “Now, we understand just how deadly these events can be, especially in our urban centers.”

Authorities also are looking at using an existing emergency alert system that would send a phone notification or landline message to warn people in real time as temperatures spike, said Dan Douthit, spokesman for the Portland Bureau of Emergency Management.

An “earthquake is a big, looming hazard for Portland, but globally, heat emergencies kill more people than any type of emergency,” he said. “We did more for this heat emergency than any heat emergency we’ve ever responded to, but it doesn’t mean that we did enough.”