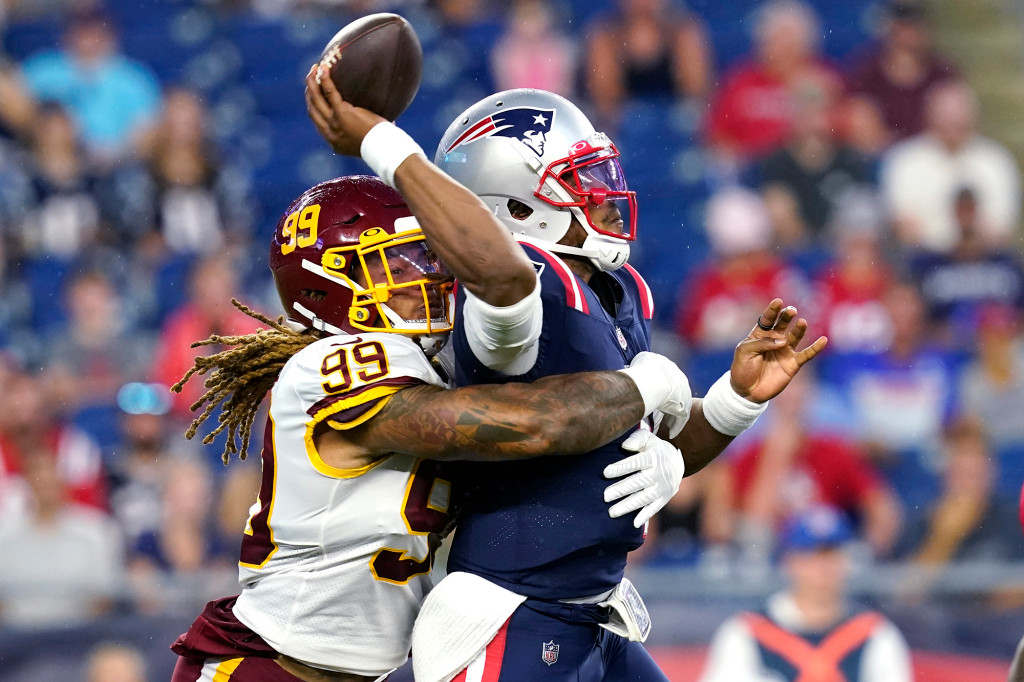 FOXBOROUGH, Mass. — Rookie running back Rhamondre Stevenson had two touchdown runs, including a 91-yard score with just over a minute to play to help the New England Patriots beat Washington 22-13 to open the exhibition season for both teams Thursday night.

Quinn Nordin had three field goals for the Patriots, including a 50-yarder. Joejuan Williams had the play of the night for the New England’s defense, picking off Steven Montez early in the fourth quarter to set up Stevenson’s first TD. Stevenson finished with 10 carries for 127 yards.

“Fundamentally I thought we made some progress, but we’ve still got a long way to go,” Patriots coach Bill Belichick said.

New England led 15-7 in the fourth quarter before Montez took Washington on a 15-play, 92-yard drive he capped with a 4-yard touchdown pass to Lamar Miller with 1:25 left.

Montez appeared to complete a 2-point conversion pass to Antonio Gandy-Golden. But a booth review overturned the call. Stevenson then got free down the sideline on the third play of New England’s ensuing series to put away the game.

All eyes were on the quarterback position for New England, with Cam Newton entering training camp looking to rebound from a disappointing 2020 campaign and cement his spot as the starter after the Patriots used a first-round draft pick on Mac Jones.

Belichick has said Newton is his starter. But it was Jones who had the better preseason debut. The rookie completed 13 of 19 passes for 87 yards in five series, spreading the ball around with confidence after he took over for Newton late in the first quarter.

Newton, who shared a field with Washington coach Ron Rivera for the first time since they were together in Carolina from 2011-2019, played the opening two series and finished 4 of 7 for 49 yards.

“(Jones) came to me and we talked it out about just his expectations,” Newton said. “He wants to be so perfect and I see his preparation is always pristine and that’s what I admire about him. … For him and today’s performance he’s just going to keep getting better. And we’re gonna be here for each other along this whole process and that’s what we’re here for.”

Ryan Fitzpatrick had a short night in his debut for Washington, playing just two series before Rivera went to Taylor Heinicke. Fitzpatrick made the most of his limited work, going 5 of 8 for 58 yards. It included a 22-yard pass to Terry McLaurin on the second play of the game and a 24-yarder to Logan Thomas during Washington’s second series.

Heinicke was 9 of 15 for 86 yards. Peyton Barber had a 1-yard touchdown run in the second quarter.

Result aside, Rivera was pleased with his team’s first outing of the season.

“I like what we got from our first offensive line. It looks like Logan is picking up where he left off,” Rivera said. “The running game seemed to click pretty well. There were a lot of things we’re gonna be feeling good about.”