The two fighters came together to share experiences and put the glory of Mexico’s combat sports ability on display. While Alvarez is considered the face of boxing today, Brandon Moreno defied all odds by becoming the first Mexican-born UFC flyweight champion.

Canelo Alvarez said that Brandon Moreno has accomplished a massive feat by being crowned world champion and that the UFC flyweight is an inspiration for him. Canelo said:

“People like him are an inspiration for everyone, even me, because look at his story and what he dreamed of and visualized and he did it being the UFC champion. If I’m not mistaken, he is the first from Mexico, so that’s inspiration and motivation for everyone, that in this life everything can happen, and i become a fan of that sort of person because at the end of the day we come from the same place and we are setting the example for the ones coming up. And to let them know that in this life anything is possible. I am very happy and proud [of] what Brandon did and hopefully there is many more fighters like him.”[Translated by UFC on YouTube]

Over the course of their meeting, Canelo Alvarez showed Brandon Moreno a few striking tricks. He explained how he avoids letting his strikes bounce off boxing bags in the gym to ensure that the punches pack more power inside the ring. They also worked on perfecting body hooks. 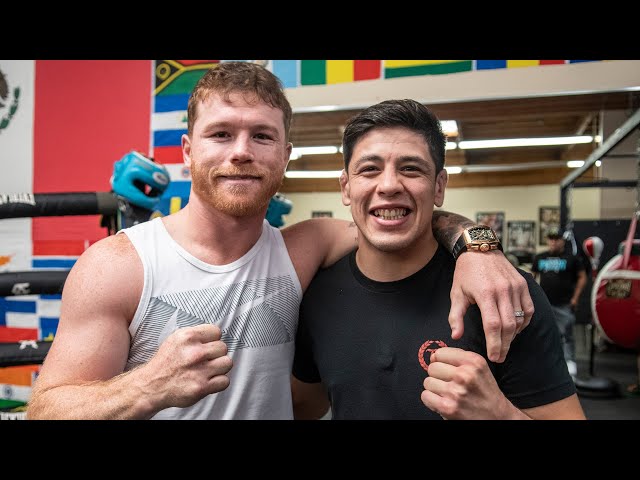 Brandon Moreno stated that his visit to the gym was nothing but inspirational. He met Canelo’s team at the gym, including former heavyweight boxing champion Andy Ruiz. Explaining how his meeting with Canelo Alvarez boosted his aim to create a legacy, Moreno said:

“I don’t want to be this ‘one-hit wonder’ in my life. I want to [keep] at this level. I want to build a legacy for me and my people around me. So, this kind of experience gets me more excited, right?…. Just to have a really nice talk with him [Canelo Alvarez] and he giving me some [advice] or telling me about the experience of his career… because, I say this to him, like, right now, I’m on top and it’s nice, but he is on top and he has been at the top for a long, long time. So, I want to do that in my life. Be on top for so many years.”