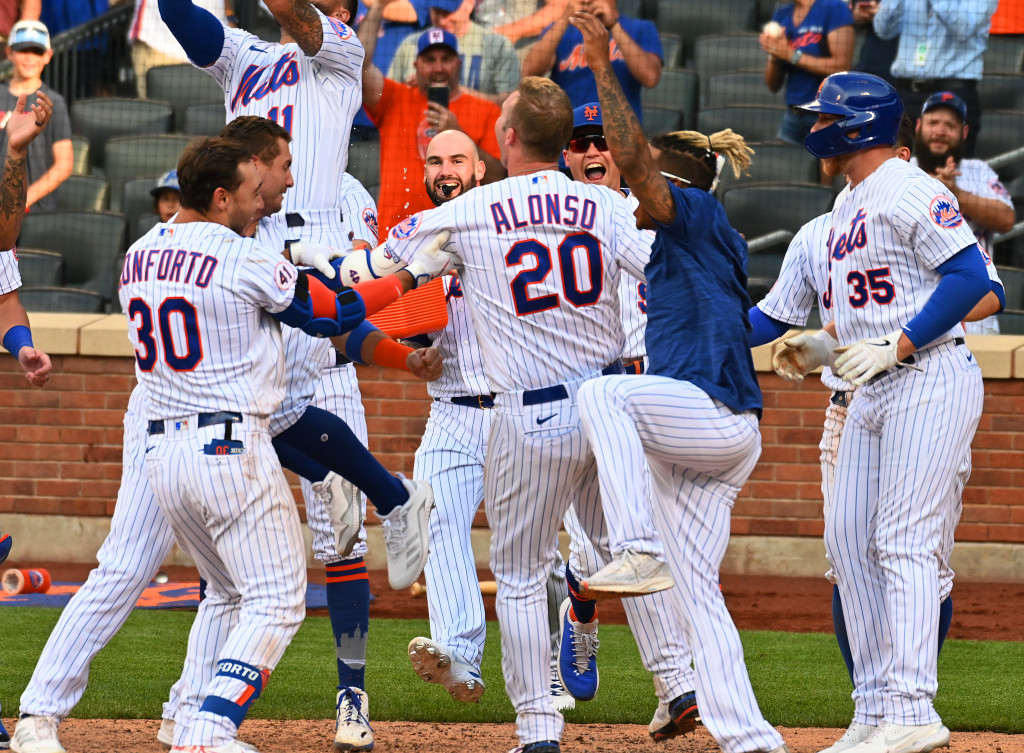 For the first time in nearly two months, the Mets have won three straight games.

They didn’t make it easy, but with the depleted Nationals serving as a trampoline for their recent free fall, the Mets took both ends of a doubleheader Thursday to complete a three-game sweep at Citi Field, springing them into a big 13-game run against a pair of NL West powers, the Dodgers and Giants.

After Brandon Nimmo and Marcus Stroman led the way to a 4-1 win in Game 1, the Mets blew a three-run lead in the final inning of Game 2 before Pete Alonso crushed a walk-off home run for the 5-4 win.

The Mets looked to be on their way to a 4-1 win in Game 2 before Trevor May and Jeurys Familia combined to blow the save in the seventh inning, after Edwin Diaz had closed out the opener. May threw 28 pitches while recording one out and loading the bases before Familia entered and got the second out. But after a wild pitch brought one run in, the next two came around to score on Andrew Stevenson’s ground ball that got under the glove of Jeff McNeil in shallow right field, tying the game at four.

But Alonso saved the day in the bottom of the seventh against Brandon Finnegan with his 25th homer of the year.

Before Thursday, the Mets (59-55) had not won back-to-back games since July 21-23 or three straight games since June 14-16 — at which point they had a season-high five-game lead atop the NL East.

The road ahead will only get tougher for the Mets with the top two teams in the NL West coming to town. But first they took advantage of the torn-down Nationals (50-65) to move a half-game back of the Phillies for first place in the NL East.

In Game 2, the Mets took a 1-0 lead in the fourth inning off Erick Fedde on back-to-back doubles by Michael Conforto and J.D. Davis. After a Jonathan Villar single, James McCann grounded into a fielder’s choice to score Davis from third to go up 2-0.

Making his Mets debut after coming over from the Cubs with Javier Baez at the trade deadline, Trevor Williams scattered three hits and two walks over 4 ¹/₃ innings. He exited in the fifth inning with runners on the corners, one of which came in to score on Yadiel Hernandez’s sacrifice fly off Seth Lugo to make it 2-1.

Williams, who had immediately been optioned to Triple-A Syracuse after the trade, made two strong starts there before being recalled Thursday as the 27th man for the doubleheader.

Villar added a two-run homer to center field for the 4-1 lead in the sixth inning, which proved to be vital an inning later when the Nationals came back to tie it with three runs in the top of the seventh.