Zekrom, the mascot of Pokemon White, compares well to the best legendary Dragons with its lethal offensive capabilities.

Zekrom is typically a beast in the main series games, but Pokemon GO takes it to another level. None of its base stats are below 200, which means it has enough bulk to take significant hits while doing damage with its 275 Attack.

What makes Zekrom even stronger is that it gets a great movepool, with powerful attacks that don’t need a whole lot of energy to use.

Which moves will this legendary Pokemon benefit from most? 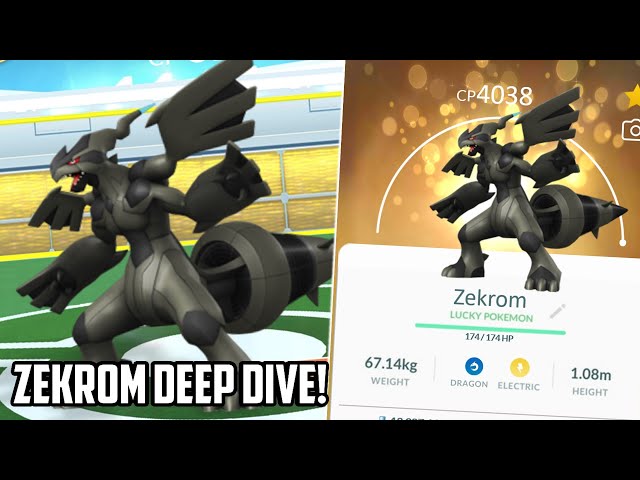 Zekrom’s best quick move option is Dragon Breath, which is surprising since Dragon Breath really isn’t the best move. Charge Beam can be a tempting option since it charges 15 energy whenever it’s used, but 8 DPS is really negligible damage.

This is really only seen on teams where Zekrom is dedicated to filling an Electric-type attacker role.

Dragon Breath, on the other hand, is an incredibly quick option that will let Zekrom easily rack up damage. One nice thing about Zekrom is that its moves don’t require as much energy, so it doesn’t need to prioritize energy production as much. It much rather benefits from damage output.

Zekrom’s best charge move should be Outrage. For moves that only need half an energy bar to use, nothing is going to compare to the 110 base damage that Outrage does.

This move is what allows this legendary Pokemon to prioritize speed and damage, since it only needs 15 energy to use Outrage.

Selecting the right charge move to pair Outrage with can be a tricky decision. There is an argument to be made for Crunch, but more often than not, Wild Charge is more valuable. It’s another high=powered move, boosted by STAB, that Zekrom only needs 50 energy for.

The argument for running Crunch is simple: helping Zerkrom burn shields will allow it to fire off strong Outrages in battle. It’s hard to find more usefulness than that, though. Most of the strong Psychic-type and Ghost-type Pokemon around (Mewtwo, Gardevoree) already beat out Zekrom as it is.