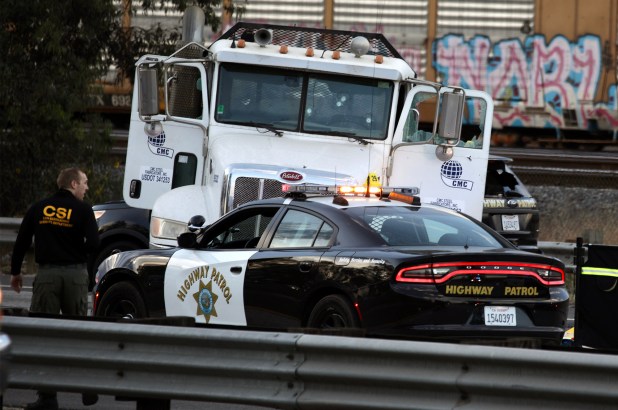 Police at the scene of shooting following the chase in Fontana, California, on June 23, 2021.
Photo by Irfan Khan/Los Angeles Times/Shutterstock

California police fatally shot the driver of a stolen big rig who was traveling the wrong-way on a freeway during an hour-long chase.

The wild chase on the 10 Freeway came to a deadly ending in Fontana after the man driving the stolen truck tried to evade a police roadblock, authorities told KTLA.

The driver stole the big rig in San Bernardino and California Highway Patrol officers gave chase shortly after midnight when they spotted the vehicle barreling in the wrong direction, the report said.

At the roadback, the driver tried to turn the massive vehicle around.

Officers tried stopping him and opened fire, killing the driver.

Another occupant inside the big rig was taken into custody. Nobody else was injured in the mayhem, police said.

“What could have happened could have been catastrophic. Obviously we’re fortunate that no innocent victims were injured during this incident,” he added.