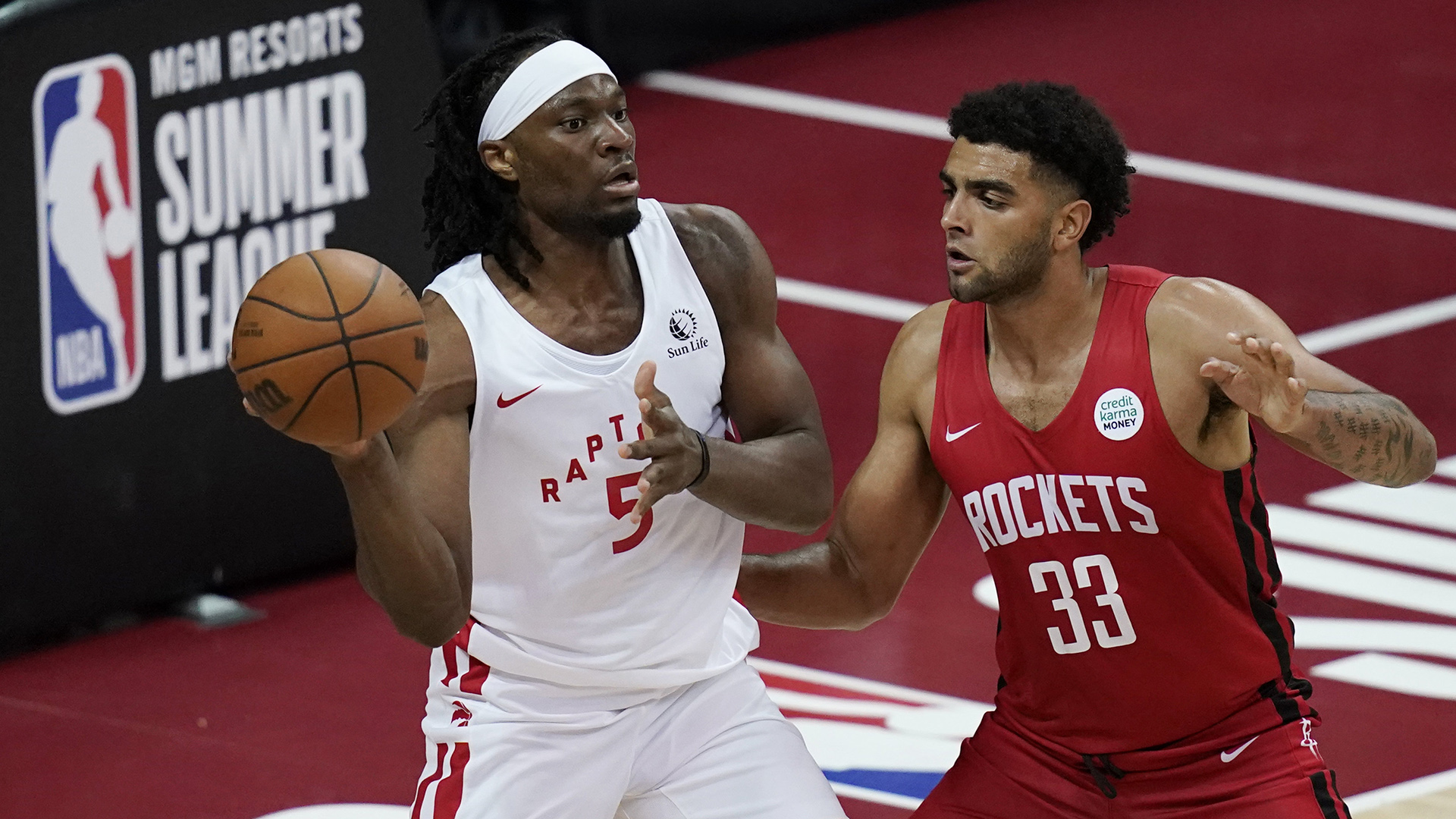 Here are 10 takeaways from the Toronto Raptors’ 92-76 win over the Houston Rockets in Las Vegas Summer League play.

One — Response: Even if it’s just Summer League, there is still a standard that the Raptors need to uphold. They failed to do so in their loss to the Warriors, and you can see how it motivated and informed their effort against Houston. Their defence was sharper, the team was more unselfish on offence, and the result was much better. That speaks to the competitiveness of this group, and it says something about the type of players the Raptors specifically covet. They’re proud of their team culture and want to build on it.

Two — Highlight: All eyes were on No. 2 pick Jalen Green and No. 4 Scottie Barnes, but the real star of the show was undrafted 26-year-old forward Ishmail Wainright. Nevermind the 20 points on 4-of-6 shooting from deep, scoring is hardly the main feature of Wainright’s game. Where his pride comes from is on defence, where he was a genuine nuisance against every single player on the Rockets, which included an electrifying scorer like Green and a post-up banger in Alperen Sengun.

No matter the matchup, Wainright got into the ball, put his barrel chest into the back of the defender, and kept them in front. He’s so strong thanks to his former days as a tight end for Baylor and for the Buffalo Bills, that he absorbs every drive while also being able to get his 7-foot wingspan in to poke the ball free. His style and trajectory could be similar to that of two-time Raptors forward P.J. Tucker, who also had to earn his stripes in Europe before returning to the league as a defensive specialist at the age of 27.

Three — Beautiful: Wainright was overcome with emotions in the post-game interview when I asked him about when he first got the call from the Raptors. He explained through tears that he’s a happy guy normally, but that his career journey has been incredibly difficult. He made it through by leaning on his family and by checking in with his Baylor alumni, many whom are in the league (including Raptors centre Freddie Gillespie). Many players go overseas and never get a sniff at the NBA, so Wainright has already beat the odds just to get a training camp invite. And with some more performances like this, where he is defensively devoted and unselfish on offence, he can follow in the footsteps of Chris Boucher or Yuta Watanabe, who are other older rookies that the Raptors gave a chance to shine. I’m certainly rooting for him.

Four — Vicious: Precious Achiuwa showed exactly why the Raptors wanted him from the Heat. Not only did he take it to Sengun repeatedly, but he showed flashes that are rare for players at his size. One thing that pops is his ball handling, where he can go full speed while pushing the ball, which is extremely rare for centres. Achiuwa can legitimately take it end-to-end without an issue, and his face-up game is dangerous even in the halfcourt because his handle allows him to shift to where he wants to go. He also splashed two threes with the encouragement from the Raptors, although that looks less reliable. What is certain is that he will look to posterize players at every opportunity.

Five — Progression: You could envision Achiuwa following in the footsteps of Pascal Siakam as another uber-athletic big who can run the floor, guard multiple positions, handle the rock, and potentially develop the jumper. The one thing Siakam always had definitively over Achiuwa is the post-up game, where Siakam has the coordination, touch, and creativity to get his shot off, whereas Achiuwa is much more mechanical in his attempts to muscle for position before tossing up a baby hook. Siakam’s role in his second season was to be the energy guy off the bench and feast in transition, while continuing to hone the more advanced skills of his game from behind the scenes. There’s no reason why Achiuwa shouldn’t get the same chance.

Six — Flashes: Dalano Banton built off the momentum from his strong second half Wednesday with another strong half to start this game. He was quick and confident on offence, showing no fear in attacking the basket and he made a number of nifty passes to set up his teammates. He was particularly effective attacking to his left, showing good burst to get his skinny shoulders past his man, before getting to the lane where he can either stretch his long arms for the layup, or kick out when the defence converges.

He wasn’t as involved in the second half, but he had a great stretch to end the third quarter where he drove baseline to find an open shooter, worked the pick-and-roll to drag defences into the paint before reversing it for another open shot on the wing, and a third play where he threw the pass over the top to the rolling big. None of the three shots were converted into assists, but they were all great looks.

Seven — Quiet: The general impression with Scottie Barnes is that he will need some cajoling to get more involved in the offence. He’s not a player who can get his shot whenever he wants, and he’s always looking to make the right pass, so it can lead to him fading into the background for prolonged stretches. Head coach Patrick Mutombo admitted after the game that he wanted to get Barnes more involved offensively, but he did praise him for his defence, which was legitimately game-changing. Barnes collected five blocks, three of which came on jumpers including a Boucher-esque closeout to the corner shooter. Even though his offence is raw, Barnes can still positively impact the game on both ends, but he will need to learn how to remain aggressive and involved.

Eight — Shades: It’s going to be a running theme all season of being without Kyle Lowry for the first time in a decade, so please excuse the indulgence. Malachi Flynn had one of those classic Lowry sequences in this game where he banged a transition three, then forced a stop in the post against a bigger player, scooped up the miss and took it coast-to-coast for an and-one finish off the glass. Flynn made a number of scrappy defensive plays throughout, sneaking in from the blind side to poke the ball free on drives. Out of anybody, Flynn will be the biggest beneficiary of Lowry’s departure. He’s got next.

Nine — Sleight: One of the best parts of Flynn’s game is his hesitation dribble, which he can do with either hand. It’s such a quick move where it looks like he will pick up the ball, get the defender to close slightly, before he jets past them for the blow-by. Sengun was not prepared for it at all.

Ten — Sloppy: It’s been a discombobulated and disappointing showing from Gillespie, who did have some nice moments to end last season. He continues to slip and slide all over the place defensively, while being routinely blocked on offence despite largely playing at the basket. The frustration got to him in this game, as he committed three fouls in quick succession right before halftime, including a moving screen where he drilled the defender out of nowhere. To put it in Vegas terms, Gillespie is playing on tilt.