Amidst all the ongoing Dota 2 qualifiers, Aui_2000’s dismissal from Arkosh Gaming became last week’s talk of the town.

Trending NA Dota 2 drama like this is what Arkosh Gaming, the ‘meme team,’ was primarily created for. Naturally, this is an absolute win in Arkosh CEO and creator Jake ‘SirActionSlacks’ Kanner’s book.

The list of SirActionSlacks’ recent victories does not end here, either. This week, he finally hit Immortal rank from his personal account.

On a recent Reddit thread, he was accused of being boosted: complete with personal anecdotes from redditors who ‘carried him’ in pubs.

This does not imply any lack of sincerity on his part, but he does many things no average Dota 2 player would dare. For one, his hotkey binds are as unorthodox as they get. He essentially handicaps his gameplay just to have his item keybinds spell out some approximation of “penis.” 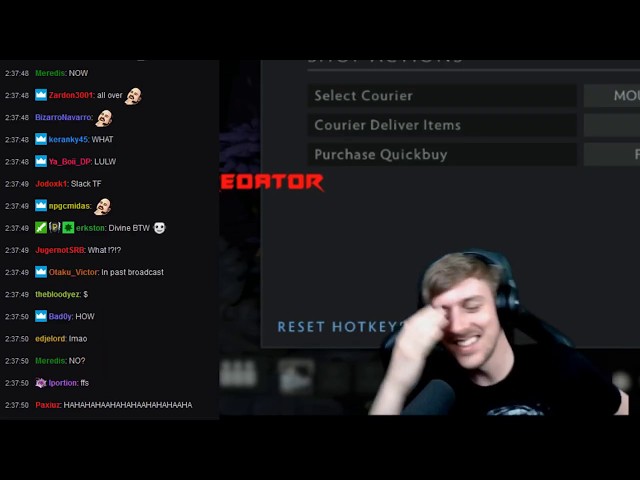 It suffices to say that with his self-imposed handicaps and level of mechanical competence, most players would struggle to hit 3k MMR in Dota 2. Even so, he had previously hit Divine rank (roughly 5k) some four years ago.

In Dota 2, reaching the first rank of the Divine medal alone puts a player at the 95th percentile. The average Dota 2 player lingers somewhere in the Archon rank, which is 2k to 3k MMR. Immortal rank is the creme de la creme bracket reserved for Dota 2’s finest. The fact that SirActionSlacks now numbers among them would rightfully seem jarring to many players.

The current Dota 2 MMR system is split between solo MMR and party MMR. There is no way to verify what ActionSlacks’ solo MMR is. But as per Dotabuff statistics, he has 49% winrate over 93 total solo ranked matches played in the last 6 months. For party MMR, the stats say 65.2% winrate over 161 matches.

The discrepancy obviously points out that his familiar party members played a major part in him getting to Immortal. Ultimately, did ActionSlacks get carried by his party? The answer is yes – but a nuanced yes.

SirActionSlacks is primarily a support player. He climbed MMR by spamming Warlock, an extremely strong sustaining support in the current Dota 2 patch. A support player’s ultimate goal is to enable their carry. Thus a support player’s end-game potential is also hard-capped by their carry. It is only logical, then, to enable a reliable carry player in a party queue rather than a stranger begotten from the matchmaking algorithm.

Finally, mechanical superiority is not the end-all in Dota 2. SirActionSlacks may not have the most insane Manta-dodging reflexes, but he more than makes up for it with his macro-gaming genius. After all, his skills shine at the support’s lot: keeping the team’s morale up from behind, and knowing the right moment to drop the Chaotic Offering.